END_OF_DOCUMENT_TOKEN_TO_BE_REPLACED

AMC Entertainment (NYSE:AMC) shares are up about 5% so far in the new END_OF_DOCUMENT_TOKEN_TO_BE_REPLACED

Why Is Disney Seeing A Pandemic Surge If Some Of Its Parks Are Closed?

Shares of the global entertainment giant surged more than 13% on Friday to close at $175.72, a record high. That's an astonishing development at a time when the pandemic has deprived the Burbank, California-based company of much of its revenue from its iconic theme parks, movie theatres and cruise lines. 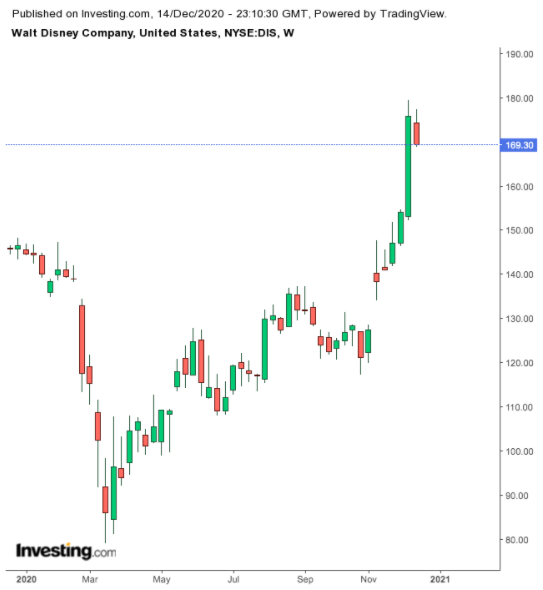 Amid one of the toughest periods in its corporate history, this remarkable turnaround should be a source of envy for entertainment executives struggling to survive when their cash flows have dried up and uncertainty about the future swirls.

So, what makes Disney such a desirable asset to own?

One clear distinction is the company’s diversified business model and the strength of its brands. At a time when customers have deserted its theme parks and movie theaters, Disney is steamrolling its newly launched video-streaming business, which many analysts believe is the future of entertainment.

The world’s largest entertainment company told investors last week that it plans to commission dozens of new movies and TV shows by increasing its spending as much as $16 billion a year by 2024. Some 80% of the lineup is aimed at providing more choices for the subscribers of its rapidly-expanding streaming service, Disney+.

These new titles are part of Disney's plans to increase its subscribers to between 230 million to 260 million by 2024. Additionally, it's aiming to increase the cost of the service by $1 to $7.99 a month.

Investors loved this new direction, which could challenge the streaming leader, Netflix's (NASDAQ:NFLX) dominance and provide Disney’s top-line a strong boost once its traditional business gets revived in a post-pandemic economy.

According to an estimate by Morgan Stanley, Disney could finish FY24 with more than 300 million streaming subscribers and $35 billion in a new revenue channel, making streaming its single largest business.

Needham analyst Lauren Martin said in a note to clients that Disney has already surpassed Netflix as the leader in streaming video.

“Even if we begin with the hypothesis that NFLX’s content is better than DIS’s (which DIS investors would dispute), DIS’s marketing decisions and innovations make NFLX look like it is standing still given its single subscription SVOD (subscription video on demand) tier of $9-$18/month,” he said, praising Disney’s suite of bundles that let subscribers select combinations of their streaming services at different price points.

Goldman Sachs, which has a buy rating on the stock and raised its price target to $200 from $157, said it sees much stronger revenue-generation going forward. In a note, the bank told investors:

“Our higher price target reflects a material increase in our long-term forecasts for DIS’s direct-to-consumer subscribers and revenue as we factor in the company’s newly revealed Star offering and the higher price points for Disney+.”

Though Disney is suffering from the global health crisis that left its parks and movie theatres deserted, investors are confident that the company will come back strongly as its streaming business becomes its fastest growing segment. These sentiments are pushing its stock higher and prompting analysts to raise price targets.