Increasingly, a number of influential people in Silicon Valley seem to think that Mark Zuckerberg will likely run for president of the United States one day. And some people, including myself, believe that he could indeed win. “He wants to be emperor” is a phrase that has become common among people who have known him over the years.

From January’s Post: “He Wants to be Emperor” – How Mark Zuckerberg is Scheming to Become President

Mark Zuckerberg wants to be President. That much is obvious, and it’s been obvious for quite some time. I’ve written a couple of articles about it, as have countless others. Then yesterday, there was a lot of chatter about the Facebook CEO hiring Joel Benenson to advise him and his wife on their charitable giving. Most of these articles focused on the superficial “does this really mean he’s running?” angle.

In contrast, I want to dig into why his recent hires tell you all you need to know about who Zuckerberg is, and why his worldview is nothing more than technocratic neoliberalism.

Let’s start off by examining a few excerpts from yesterday’s article from Politico about the hiring of Joel Benenson:

Facebook CEO Mark Zuckerberg and his wife, Priscilla Chan, have hired Democratic pollster Joel Benenson, a former top adviser to President Barack Obama and the chief strategist for Hillary Clinton’s failed 2016 presidential campaign, as a consultant, according to a person familiar with the hire.

Benenson’s company, Benenson Strategy Group, will be conducting research for the Chan Zuckerberg Initiative, the couple’s philanthropy. The organization — whose mission statement, according to its website, is “advancing human potential and promoting equality” — is endowed with the couple’s Facebook fortune.

In January, the couple hired David Plouffe, campaign manager for Obama’s 2008 presidential run, as president of policy and advocacy. Plouffe had previously worked at Uber. Ken Mehlman, who ran President George W. Bush’s 2004 reelection campaign, also sits on the board.

Benenson’s involvement in the group gives them access to someone who was one of the top lieutenants of Clinton’s doomed campaign and Obama’s longtime pollster, just as speculation about Zuckerberg’s political ambitions is mounting.

Even before his is-he-or-isn’t-he road trip, Zuckerberg had shown an interest in politics and social issues. In 2010, he announced during an appearance on “Oprah” that he was donating $100 million to help fix the Newark City public school system in New Jersey. The influx of Facebook cash, however, didn’t generate the desired results, and the gift became a nationally recognized failure of good intentions.

The above is a great indicator of what a Zuckerberg presidency would look like.

But the hiring of Benenson is sure to fuel speculation that Zuckerberg is getting more serious about how he plays in the political and policy worlds.

Let’s start the analysis with Joel Benenson, since he was the topic of the above post. He made quite a name for himself during the Democratic primary by blasting Bernie Sanders and defending the bailed out, welfare queen TBTF Wall Street mega-banks. As reported by David Sirota in the International Business Times:

Hillary Clinton’s campaign held a conference call Thursday with reporters to deride Bernie Sanders for airing an ad that criticized Wall Street firms and the politicians who accept their donations. Though the ad did not mention Clinton by name, the conference call featured her top strategist Joel Benenson portraying the spot as an inappropriate attack on Clinton, whose 2016 campaign has accepted $5.7 million from executives in the financial industry.

On the call, Benenson accused Sanders of going negative, asserting the U.S. senator from Vermont had “decided to do something that he had said so proudly he would never do.” What the Clinton campaign did not say when announcing the call is that Benenson’s firm not only consults for Clinton — it also lists as clients the kind of Wall Street banks that Sanders’ ad assails, as the Intercept’s Lee Fang pointed out.

According to its website, the Benenson Strategy Group lists Bank of America and JPMorgan Chase among its clients. In a 2012 press release, Benenson listed JPMorgan Chase — whose executives are collectively among Clinton’s top 2016 donors — as an example of how the firm “has guided many Fortune 500 companies and leading advocacy groups through critical strategic and communication challenges.” The section of Benenson’s website listing the banks as clients says the firm is focused on “delivering strategies corporations need to stay ahead of the curve.” Other clients listed include McDonald’s, Pfizer and Walmart — the last of which once had Hillary Clinton on its board of directors when she was first lady of Arkansas.

Benenson also proved himself to also be a fierce opponent of transparency during the primary. Recall what he said about Hillary Clinton’s Wall Street speeches:

So far, the Clinton campaign has shown no inclination to release the texts of her remarks to Goldman or anyone else. At a debate in New Hampshire last week, Clinton said she would “look into” the matter. A day after the debate, Clinton pollster Joel Benenson told reporters, “I don’t think voters are interested in the transcripts of her speeches.” On ABC’s “This Week” on Sunday, Clinton pushed back even harder on calls to release the speech transcripts.

Now let’s take a look at some of the highlighted clients from Joel’s firm, The Benenson Strategy Group: 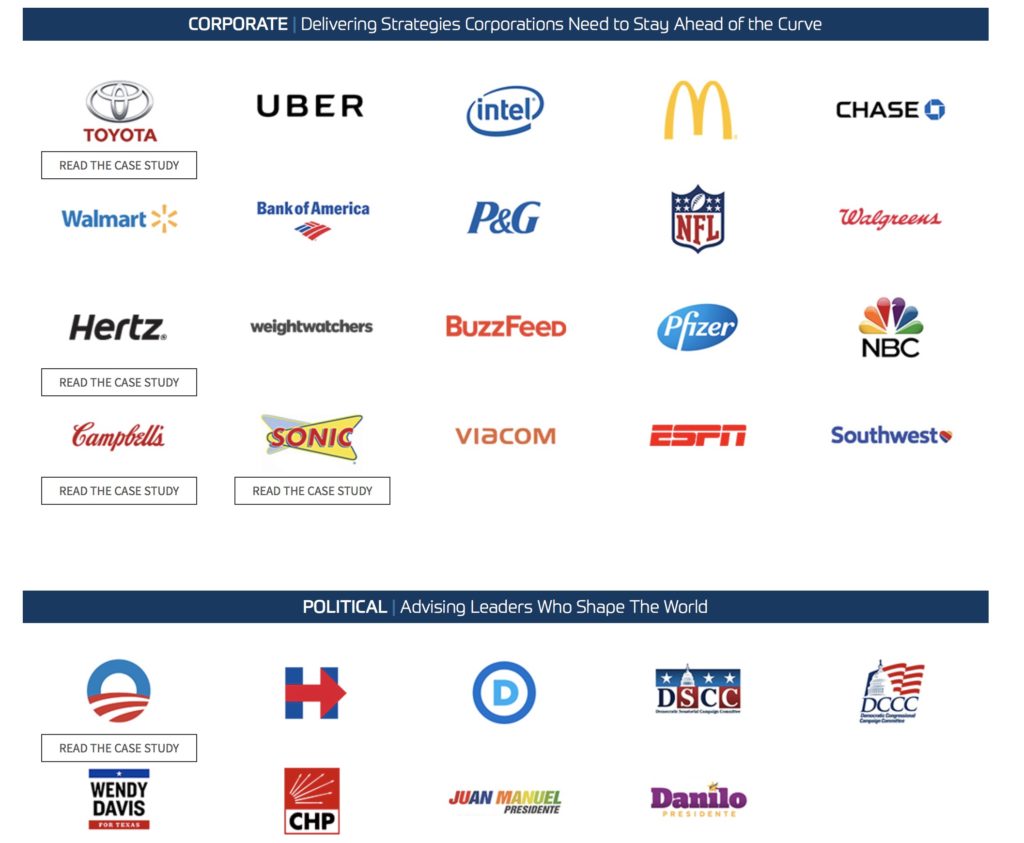 The political clients are particularly telling.

Do they represent the views of so many of the people across rural America Zuckerberg claims to be trying to understand? Do they represent anything radically new or populist at all? Of course not.

Moreover, it’s not just Benenson that Zuck is hiring as we saw in the Politico article earlier. He’s hiring a smattering of corporate Democratic strategists and consultants (and even a George W. Bush alum). This tells you so much about who this guy really is and what he believes. He wanders around the country claiming to want to understand “the people” and then he shuffles right over to Clinton/Obama people for wisdom. He doesn’t really want to hear from the rabble or promote genuine populist change, he just wants to be the technocratic leader of another firmly neoliberal American government. That’s all this is.

Much of how Zuckerberg operates focuses on image instead of substance, as we saw throughout his cross-country narcissism tour. Not that this should be a surprise coming from the creator of Facebook, a platform designed so that people can carefully craft a fake public image of themselves for their “friends” to admire.

All of this proves that Mark Zuckerberg has absolutely no creativity or genuine insight when it comes to political thinking. He runs straight to the same neoliberal strategists and corporate Democrats that Americans are sick and tired of, and offers nothing new other than a technocratic face on a failed and expired political class. Ten million cross country road trips to Iowa will never alter this reality.