To say 2019 was a rough year for China is perhaps an understatement, with persistent protests in Hong Kong, soaring food inflation and slowing growth having plagued the 2nd largest economy in the world. To add insult to injury, the coronavirus outbreak, which was first reported on December 31 with its epicenter in Wuhan, got out of control days ahead of Chinese New Year. To quote from SCMP on the latest domestic situation:

The latest death brings the confirmed toll to 18, with the other 17 occurring in Hubei, the epicenter of the contagion. Chinese authorities have imposed travel bans on more cities in Hubei province and announced the allocation of funds to fight the spread of illness that has infected at least 647 people. Eight cities in Hubei - Wuhan, Huanggang, Ezhou, Chibi, Xiantao, Qianjiang, Zhijiang and Lichuan - are now subject to travel bans, according to notices released by local governments.

The contagious virus has also spread outside the border, albeit still on a limited basis, with confirmed cases in Hong Kong, Japan, United States, Thailand, etc. In terms of market impact, China (FXI) and Hong Kong (EWH) stocks were hammered by more than -5%, while crude oil (USO) was also rattled on fears of lower travel demand. Meanwhile, U.S. stock markets are unfazed thus far with S&P 500 (SPY) pinned at the highs and the Dow Jones Transportation Index (IYT) down a modest 2%: 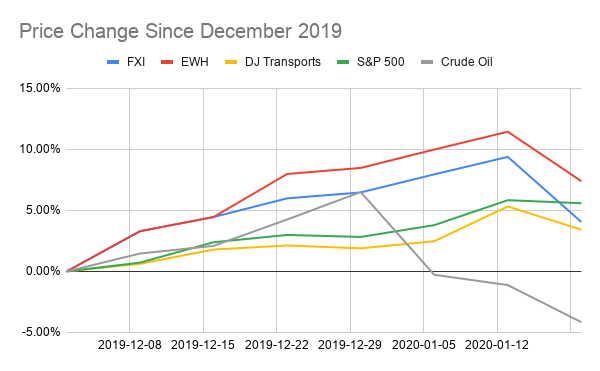 What The Last 2 Major Viral Epidemics Tell Us

Going forward, history serves as a guideline on what to expect in major markets. In the past two decades, the SARS and Ebola outbreaks in Hong Kong and West Africa were arguably most significant which received global attention and had profound impact on select markets. Firstly, during the SARS crisis, which started in early 2003 when a super-spreader infected dozens in Hong Kong, the Hang Seng index plummeted more than 10% before eventually bottoming in April: 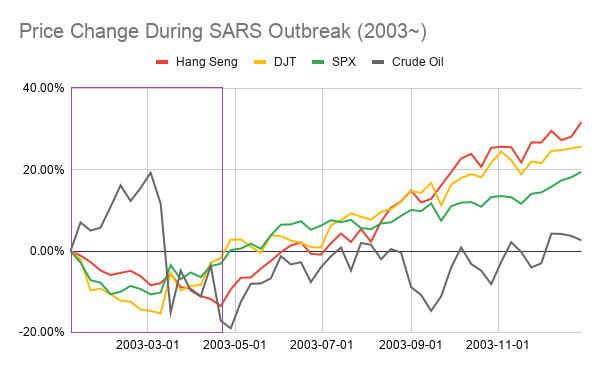 The outbreak became an international headline when WHO declared a global health alert in March, after which a whopping -30% plunge ensued in crude oil. Meanwhile, the U.S. stock markets actually bottomed around the same time to begin the next bull market. The epidemic would ultimately draw to a close in May.

In 2014, the Ebola virus outbreak in West Africa became the most widespread of the disease in history, "causing major loss of life and socioeconomic disruption in the region, mainly in Guinea, Liberia, and Sierra Leone." per Wikipedia. In terms of timeline, the epidemic became an international concern that August, with the first case in United States declared a month later. As a result, a brief panic ensued, as Ebola became a trending topic in Google but eventually petered out by November: 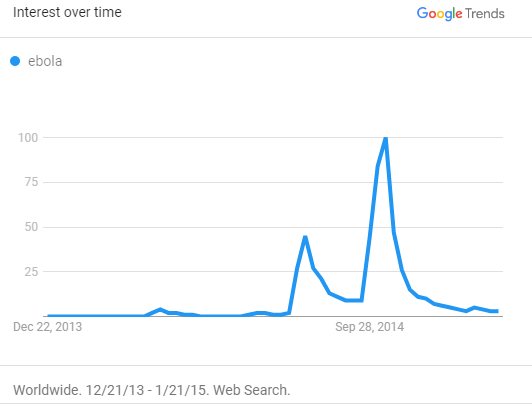 Note that the spike in interest on Ebola coincided with a roughly -5% dip in S&P 500 and Dow Jones Transportation Index, which was subsequently erased as the panic subsided. Overall, similar to the SARS outbreak, the damage was largely constrained to domestic stock market based on the VanEck Africa ETF (AFK) as well as crude oil: 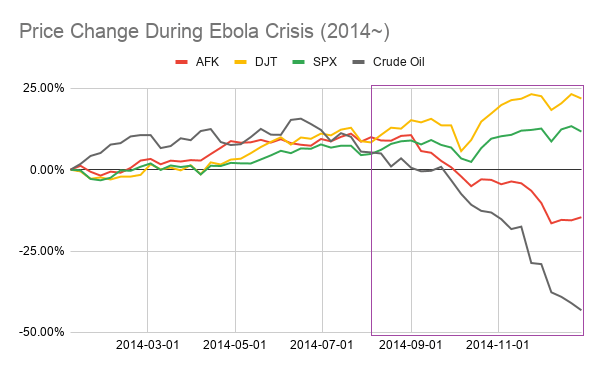 Wuhan Coronavirus Could Be 10 Times Worse

All said and done, we ought to be cautious about the possibility that this time may be different. According to the Business Insider, the deadly coronavirus from China could lead to an outbreak at least 10 times worse than SARS. Here are several reasons why a major contagion is not unthinkable:

With the outbreak still at its early stage, we can merely speculate as even the WHO is unable to conclude on the severity of the crisis. In terms of market sentiment, while U.S. stocks have been resilient, we would be vigilant in a potential panic-selling as long as the term "wuhan virus" continues to trend in Google: 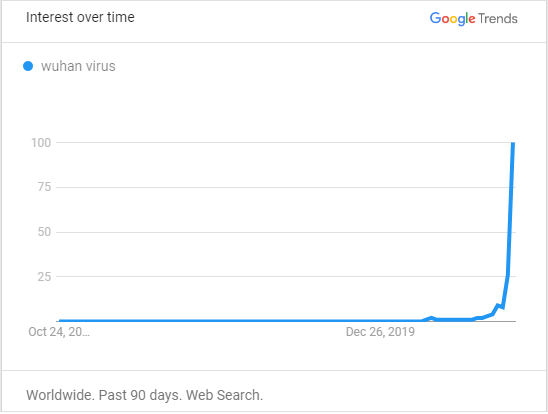 In the event of a prolonged crisis, the potential dent in international travel volume would most certainly linger on crude oil as well as airlines and transports sectors. So far, the sell-off in airlines ETF (JETS) has been rather muted, as it continues to hover around multi-month highs: 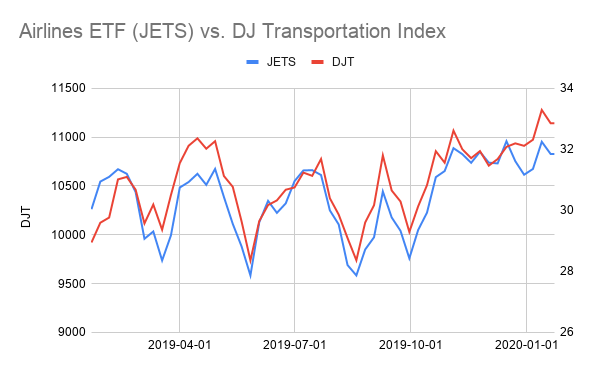 While there has been a spike in option trading activity, implied volatility in JETS remains grounded near the lows which signals the lack of demand for hedging. For a relatively cheap portfolio hedge which directly correlates with the epidemic, we would suggest looking into JETS 31 March puts which currently trade at 65 cents.

To sum up, further turmoil in crude oil and stock markets surrounding the epicenter in China and Hong Kong are to be expected, with airline and transport sectors most likely also taking a toll. Should the global spreading situation deteriorate, a quick panic-driven correction in the broader U.S. market resembling the one during the peak of Ebola crisis in October 2014 looks plausible as well.