Last year was probably the toughest in recent history on airline stocks. END_OF_DOCUMENT_TOKEN_TO_BE_REPLACED

GameStop (NYSE:GME) is up 85% over the past month through June 8. END_OF_DOCUMENT_TOKEN_TO_BE_REPLACED

Why VEREIT Is A Dividend Investor’s Dream

VEREIT (NYSE: VER) is a pretty simple real estate investment trust (REIT). That hasn't always been the case, though. Add in the legal overhang from a small accounting error made under the company's previous leadership team, and it's understandable that investors might be leery of investing here. However, that's exactly why VEREIT is a dividend investor's dream today, since that is the very reason it offers a robust 6.5% yield -- more than 2 percentage points higher than some of its closest peers.

Here's what you need to know and why you might want to buy VEREIT today.

VEREIT was previously known as American Realty Capital Properties. It was created via a quick succession of acquisitions. Included in that growth phase was the purchase of a company that created and managed non-traded REITs, a business that is very different from operating owned properties. At first, Wall Street was excited by the company's rapid growth, but the good times came to a screeching halt when a small accounting error was unearthed.

The stock crashed, the dividend was suspended, and basically the entire leadership team was replaced. The board landed industry veteran Glenn Rufrano to help turn the company around. He didn't waste much time, either, quickly announcing plans to right the ship . That included changing the company's name to VEREIT, jettisoning the non-traded REIT business, restoring the dividend, getting the balance sheet back to investment-grade status, and setting targets for a portfolio overhaul.

Rufrano and his team have done an excellent job of living up to the self-imposed targets. The balance sheet has returned to investment-grade status, the portfolio is more balanced than it was when he stepped aboard, and the dividend was reinstated (at a lower level) after just two missed quarters. The only lingering issue for VEREIT at this point is on the legal front, as it deals with shareholder lawsuits stemming from the accounting issue.

A Picture That's Getting Clearer

Those legal risks are starting to become better defined. For example, the company has settled with roughly a third of its shareholders for around $250 million. Doing some conservative, back-of-the-envelope math, it looks like VEREIT's total liability could be around $1 billion. Although that's a big number, the REIT started 2019 with roughly $1.7 billion of capacity available on its revolving credit facility. In other words, it can handle the blow.

What about the actual business? VEREIT is in pretty good shape. It owns nearly 4,000 properties, making it one of the largest net lease REITs in the industry. Net-lease assets are fairly low risk because the lessee is responsible for most of the operating costs, and such properties usually come with long-term leases. For example, VEREIT's average remaining lease was nearly nine years at year-end 2018. That should be long enough to get it through the next economic downturn, whenever it comes.

Moreover, net lease assets are often sale/leaseback transactions involving key corporate assets. Lessees use these deals to help raise capital for other purposes, like expansion and investment. This, in turn, tends to lead to high occupancy rates for net-lease REITs, since lessees don't want to vacate key properties even as they use them to raise capital for other purposes. VEREIT's occupancy was an impressive 98% at the end of 2018, a level it expects to maintain in 2019.

VEREIT, however, is a bit unique in the net lease space because it has a fairly diversified portfolio (many peers focus almost exclusively on retail assets). VEREIT's rent breakdown is 42% retail, 21% restaurant, 19% office, and the remainder industrial properties. That's pretty close to the company's target breakdown. While investors have historically seen this diversification as as a negative, it could actually be seen as a positive because it allows VEREIT to put money to work in a variety of property types on an opportunistic basis. 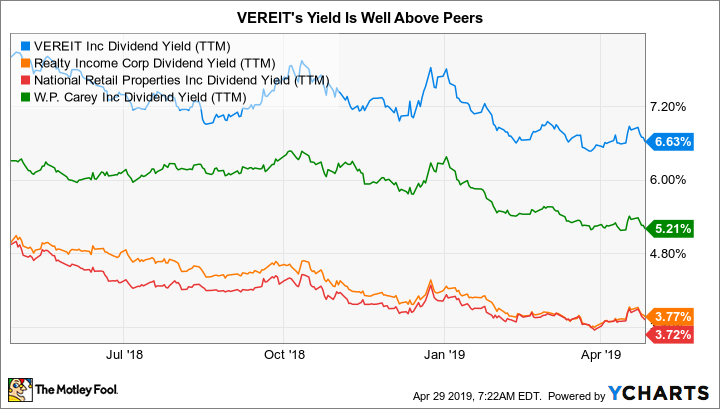 To be fair, there's been a lot of movement on the portfolio front in recent years, mostly involving selling assets. However, with the portfolio and tenant rebalancing nearly complete, VEREIT is projecting dispositions and acquisitions to be roughly in line with each other this year. That's a vast improvement over recent years, in which far more time was spent selling assets. In fact, matching sales and acquisitions will mean that VEREIT will largely self-fund its purchase activity in 2019, which is a good thing. It also suggests that a return to portfolio growth could be close at hand.

The dividend, meanwhile, is unlikely to be increased until the legal issue is settled. That said, with a 6.5% yield, that's not the worst thing in the world. Moreover, assuming the company hits its adjusted funds from operations (AFFO) targets, the payout ratio will be roughly 80%. That's a solid figure that leaves plenty of room for VEREIT to deal with its legal issues and, eventually, resume dividend increases.

At Some Point, Investors Will Catch On

Add it all up, and VEREIT is a much better REIT today than it was just a few years ago. Investors are starting to figure this out. There's still that legal issue hanging over the REIT, but the haze there has started to clear, too, and it looks like VEREIT will be able to handle the remaining hit without too much difficulty. Once that issue is in the past, investors are likely to reassess the stock's future and price it more in line with peers. However, if you act now, you can catch its fat yield while it remains well above what peers are offering.