Cheap stocks continue to be the land of opportunity for aggressive investors.We END_OF_DOCUMENT_TOKEN_TO_BE_REPLACED

One big firm that just initiated coverage on pot stocks is Bank of America. Their take? Of the Big Four pot stocks — Canopy Growth (NYSE:CGC), Aurora Cannabis (NYSE:ACB), Cronos Group(NASDAQ:CRON) and Tilray(NASDAQ:TLRY) — the only two worth buying right now are Canopy and Aurora.

This isn’t an isolated viewpoint. According to TipRanks data, 10 analysts cover CGC stock, while eight analysts cover ACB stock. Of those 18 ratings between CGC and ACB, none of them are Sell ratings. Instead, the consensus rating on CGC stock is “Moderate Buy” while on ACB stock, it’s “Strong Buy.”

In other words, the broad consensus among Wall Street firms is that when it comes to the cannabis space, investors should buy CGC and ACB, and forget about CRON and TLRY for the time being. I largely agree with consensus Wall Street view. Here’s why.

The plain answer here is you buy CGC stock because this company has the most visibility today among all pot stocks to one day transform into a long term market leader.

Canopy has everything you’d want in an early-stage leader in a big-growth market. Sales leadership? They dwarf everyone else in the space when it comes revenues. Growth? They are growing just about as fast as anyone in the space, despite a much bigger base. Production leadership? They sell far more kilograms of cannabis than anyone else, and have among the largest production footprints in the world. Market expansion? They are pushing aggressively into the U.S. hemp market. Confident leadership? CEO Bruce Linton just said that Canopy will generate over C$1 billion ($748 million) in sales over the next 12 months. Celebrity connections? They have ties with Seth Rogen, Snoop Dogg, and Martha Stewart.

Above all else, though, Canopy has the financial resources and firepower to sustain and even grow its early lead. A few quarters ago, alcoholic beverage giant Constellation Brands (NYSE:STZ) poured $4 billion into Canopy. The company still has $3 billion of that left on the balance sheet. That’s almost double what any of its competitors have in terms of cash on hand.

While 2018 saw a blockbuster year (with nearly $14 billion raised) for cannabis investments, 2019 is on pace to blow past that total, according to cannabis research provider New Frontier Data. 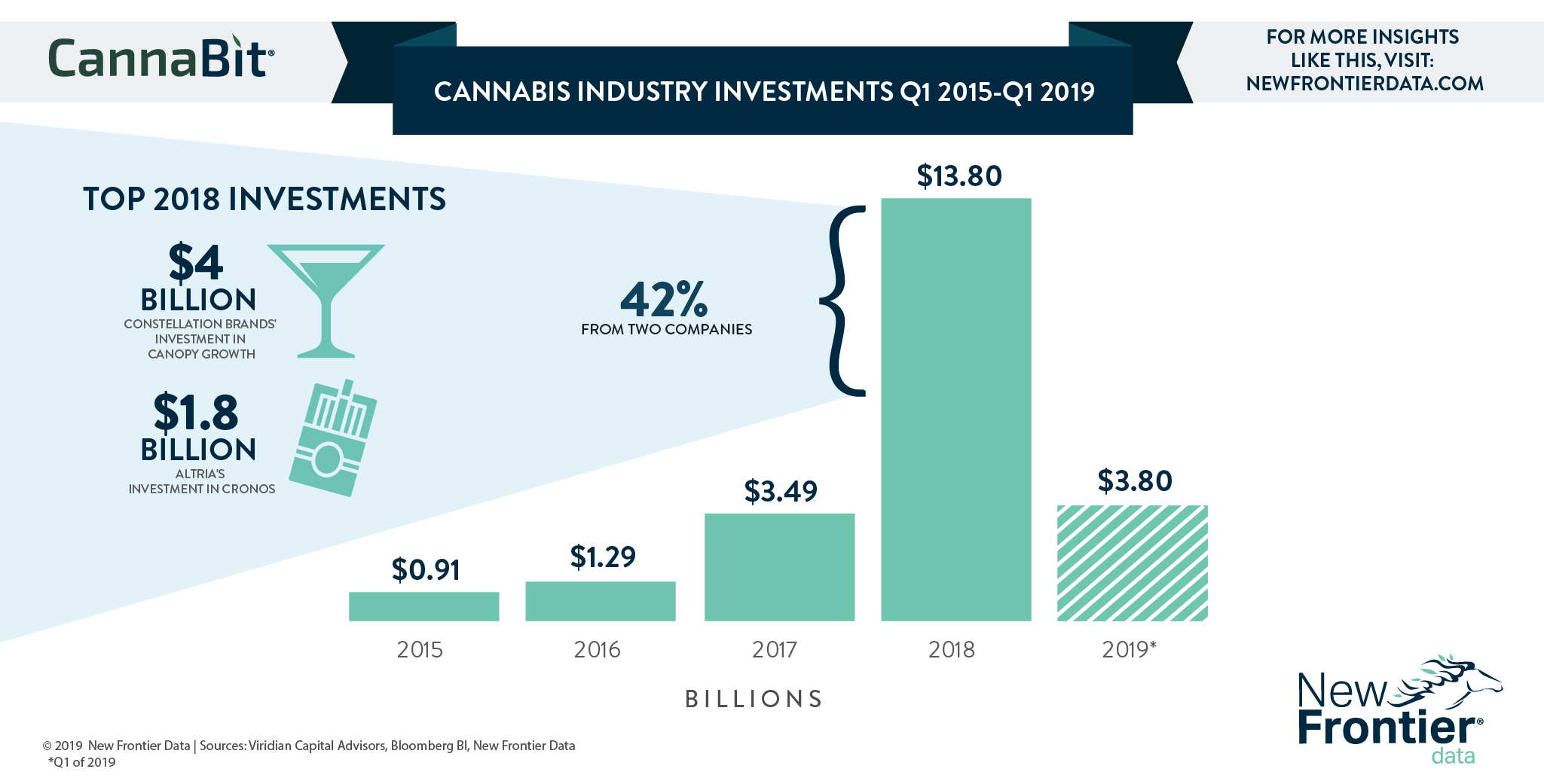 Thus, Canopy has far more firepower than anyone else in this space to invest in growth opportunities, expand operations, expand production, acquire smaller players, so on and so forth. As such, the company does reasonably project as a long-term leader in the global cannabis market, and that’s why buying CGC stock today makes sense.

The plain answer here is you buy ACB stock because this is the cheapest pot stock in the group for reasons that are most likely temporary.

On a pure valuation basis, ACB stock is as cheap as it gets in the cannabis space. Across every metric — trailing sales, forward sales, market cap per kilogram, annualized revenue — ACB stock is considerably cheaper than its peers. We are talking a 20%+ undervaluation gap.

This relative undervaluation has nothing to do with operating fundamentals. Aurora is big, with the second-largest sales base in the market behind Canopy. The company controls about 20% of the Canadian adult-use market. They also have tremendous production capacity (Aurora has 500,000 kilograms per year in funded capacity) and gross profit margins are among some of the healthiest in the business.

Instead, the relative undervaluation in ACB stock has to do with balance sheet. Specifically, unlike peers Canopy and Cronos, Aurora hasn’t scored a big investment from a consumer staples giant. Thus, the balance sheet isn’t overflowing with billions of dollars to help fund growth. Instead, Aurora has just over $100 million in cash on hand.

This won’t last forever. Aurora is a big and leading company in the rapid growth cannabis space. The stock is also trading at a huge discount to peers. Thus, it truly is only a matter of time before some big consumer staples company pumps a billion bucks in here, or more. When that happens, the relative undervaluation gap will disappear, and ACB stock will rally in a big way.

The cannabis sector reeks of long-term potential. But, a lot will happen between now, and when the market matures, and that means that investors need to choose wisely when investing in pot stocks this early in the game.

Investment translation? Only buy CGC stock and ACB stock. There are very good reasons to own those two pot stocks here and now, and they should rally over the next several quarters.