Approaching A Double Top Rather Than All Time Highs

We see that the S&P 500/SPX (SP500) continues to power through to prior all-time highs/ATHs around 3,400. In fact, SPX is only about 0.62% off from its ATHs (at the time of writing this article). However, despite the market's "optimism," due to unprecedented mayhem, (coronavirus resurgences, social unrest, slowing economy, etc), the S&P 500 may be approaching a double top rather than new ATHs.

Trees don't grow to the sky, and stocks cannot appreciate continuously without corrections 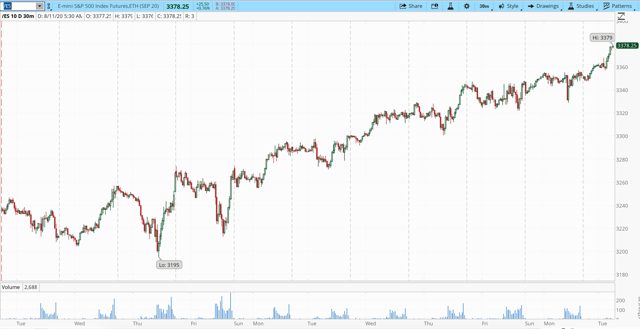 Now, there are two primary scenarios here in my view:

Scenario one is that despite all the "uncertainty" (coronavirus resurgences, social unrest, slowing economy, etc.), SPX breaks out above 3,400, consolidates, and proceeds to move toward 3,500. However, even if SPX goes on to make slightly higher ATHs, I still expect a notable correction to begin anytime from now to early/mid-fall. 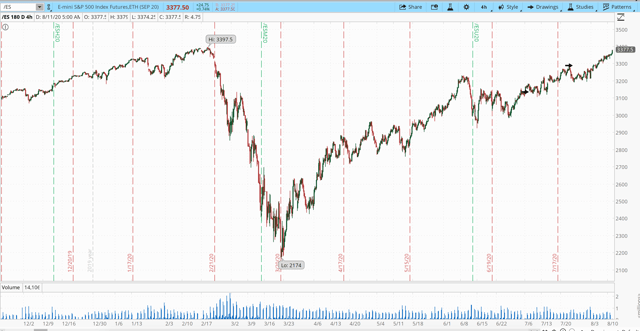 Scenario two is that SPX bumps up to around 3,400, but does not break out, forms a double top, and begins to roll over. In such a scenario, we could see a notable correction to around 3,000 in a base-case scenario, and in a worse-case scenario SPX could fall all the way back down to roughly 2,750 support.

The Story Behind Silver 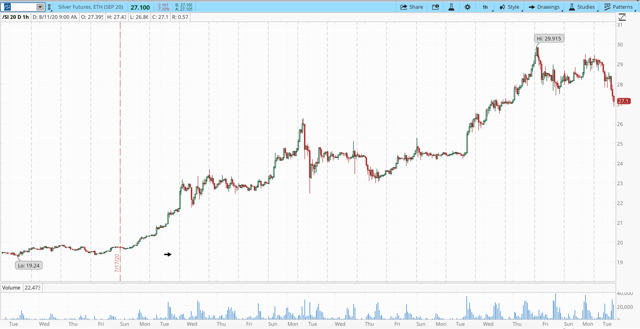 After a stellar run up in recent months, we see that silver is at a critical support level. If $27 support/stop-out falls through, silver is likely to test and likely break through lower levels of support. In fact, if $27-$26.50 support does not hold silver could fall all the way back down to roughly $24-$25 level.

This is from a short-term technical perspective, as silver has skyrocketed by nearly 200% from its mid-March bottom. A fall back to $25 from recent highs would represent a correction of roughly 16%, and a decline to the $24 level would be a correction of about 20%. Thus fur silver has only declined by around 6.6% (at the time of writing this article).

From a fundamental standpoint and an intermediate to longer-term perspective, silver is still likely to appreciate substantially over the next several (1-3) years. This thesis is based on unprecedented expansion of the monetary base by the Fed and other central banks around the world. Our one-year price target range regarding silver is $50-$60.

We see that the monetary base has exploded higher due to trillions of liquidity being poured into markets by the Fed. The monetary base is likely to continue to expand to roughly $10 trillion or higher over the next one to two years as the Fed stimulus filters its way through the financial system. 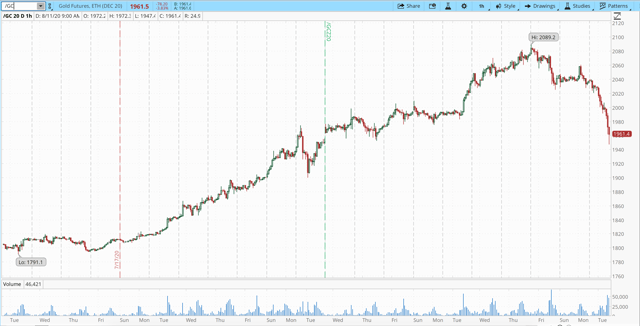 Gold just corrected to $1,950, which is nearly 7%, a notable pullback for gold. However, we see that gold is bouncing off support nicely for now, and I do not expect further declines unless gold breaks down below the $1,950 support.

The intermediate to longer-term backdrop concerning gold remains bullish due to monetary expansion by the Fed and other central banks around the world. Our one-year price target range for gold is $2,500-$3,000.

Bitcoin: What to Expect Next 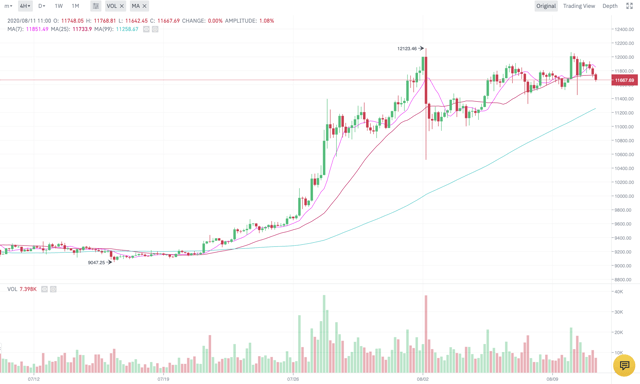 We see that Bitcoin (BTC-USD) has decoupled from the S&P 500, as it was mimicking its overall price action for weeks. Now Bitcoin appears to be correlated more with the price of gold. Having said that, BTC could decouple from gold's correlation at any time, as it did with the S&P 500.

Now, we see that Bitcoin has attempted to break out above $12,000 on several occasions, but failed and may have put in a double top for now. Bitcoin is moving lower now and is at risk of breaching some critical support levels.

The first support level I'm looking at is $11,500, and then at critical support at $11,000. If $11K support breaks down, Bitcoin could move significantly lower to $10K or below. In my view, Bitcoin below $10K is unlikely but it's plausible if volatility picks up.

I believe there's also the overall stock market factor to consider. If we see volatility pick up substantially (VIX to around 40-50), there will likely be panic selling across the board. Gold/silver/miners/GSM stocks, non-GSM stocks, Bitcoin, altcoins, and other assets are all likely to sell off roughly in unison similarly to the way they did in March, if volatility begins to spike and major stock market averages correct by 10-20%.

The Bottom Line: What We are Doing with Our Portfolio

We remain cautious on the S&P 500 and on stocks in general. Our non-GSM stock/ETF position is at about 18% right now, and we will decrease positions when markets begin to show more substantial signs of weakness. We are not heavily invested in non-GSM names right now as we see a strong probability for a notable correction between now and some time in early to mid fall.

Our GSM position constitutes roughly 28% of our portfolio holdings. We are comfortable with GSMs as we see strong probability for substantial upside in the intermediate and long term, despite any short-term market gyrations.

Bitcoin/digital assets also continue to be a substantial part of our portfolio, and are at around 28% of total portfolio holdings. However, while there's significant long-term potential in this sector in my view, we will unload positions if Bitcoin starts to breakdown below $11,500-$11,000 support.

Aside from that, we have about 5% in bond instruments, and roughly 20% of our portfolio is in cash right now. Some of this cash will likely be deployed towards both GSM and non-GSM names on pullbacks and/or corrections.