Like its peers, United Airlines (NASDAQ:UAL) stock hasn’t performed well this year. However, UAL stock and the shares of the other major airlines have bounced off their lows and continue to trade sideways.

It’s like the group is just waiting for some bit of good news to jolt the stocks higher. Just based on their price action, it looks like this sector will advance when the time is right.

In order to play that move, there are various stocks and ETFs investors can buy. United Airlines isn’t a terrible company, but it’s not the name I would purchase to participate in the sector’s gains.

After looking closely at five of the largest U.S. airlines, I have determined that UAL stock is the worst performer in the sector over the past 12 months. Southwest Airlines (NYSE:LUV) is down “just” 27% in the past year. Delta Air Lines (NYSE:DAL) is the next best performer, down 44%. Then come Spirit Airlines (NYSE:SAVE) and American Airlines (NASDAQ:AAL), down 53% and 55%, respectively.

United has tumbled 59% in the last year. It’s also the worst performer in the sector so far in 2020.

While United has had a decent rebound from its lows, I am inclined to go with names that are strong, not weak. In other words, I would rather buy Southwest or Delta versus UAL stock.

As far as catch-up trades, I would rather be long Spirit Airlines. The company is cutting its cash burn and may be the first to turn profitable once demand returns. For those looking to avoid company-specific exposure, I would be open to owning the U.S. Global Jets ETF (NYSEARCA:JETS).

It’s not that United is a horrendous company; it’s just not as attractive as other options.

At the end of the day, it doesn’t really matter which airline stock one owns; they will likely all struggle until demand rises meaningfully. The exceptions to this statement, to a degree, may be Delta and Southwest. Those two  stocks have been inching higher even as travel numbers remain disappointing. 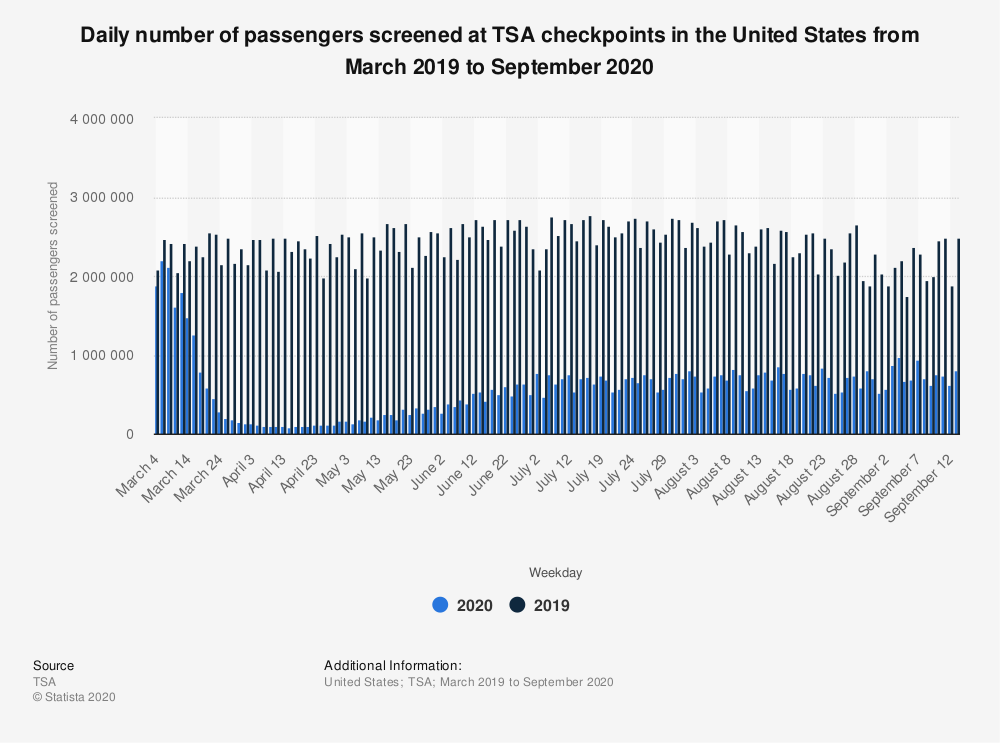 The daily TSA checkpoint numbers are shown on the chart above. While there are some spikes higher and the numbers have improved since July, there has yet to be a sustainable climb in airport traffic.

On the plus side, there hasn’t been a big dip in airplane travel, even though the number of novel coronavirus cases has remained elevated.

Will flu season change that? Will the holidays override consumers’ fear?

We don’t know the answers to those questions. All we know is that, if airline traffic jumps to, for example, 1,000,000 daily passengers, the airline stocks could catch some momentum. Without significant jumps in traffic, though, it’s hard to be extremely bullish on the sector in the short-term.

United recently began to add back a bit more capacity to its flights for September and October. That’s a good sign that demand is picking up, although it’s still well below last year’s figures.

Last quarter — when airlines bottomed — United burned about $40 million of cash per day. But management expects its cash burn to fall to $25 million per day in the third quarter.

While a liquidity issue seems to be off the table for now, thanks to airlines’ increased debt and the federal government, airlines’ balance sheets will now be an issue for investors. While some, like Southwest, have stronger balance sheets than others, this general concern extends beyond United and is really affecting most of the airline space.

While I still prefer other plays in the airline industry, the charts do not look all that bad for UAL stock. In essence, it looks like most of its peers, as the shares continue to bubble higher, awaiting a catalyst.

That catalyst is likely a return of airline traffic, as I explained earlier. But it could also be positive data on a vaccine. Either way, look at the way the shares continue to put in a series of higher lows. 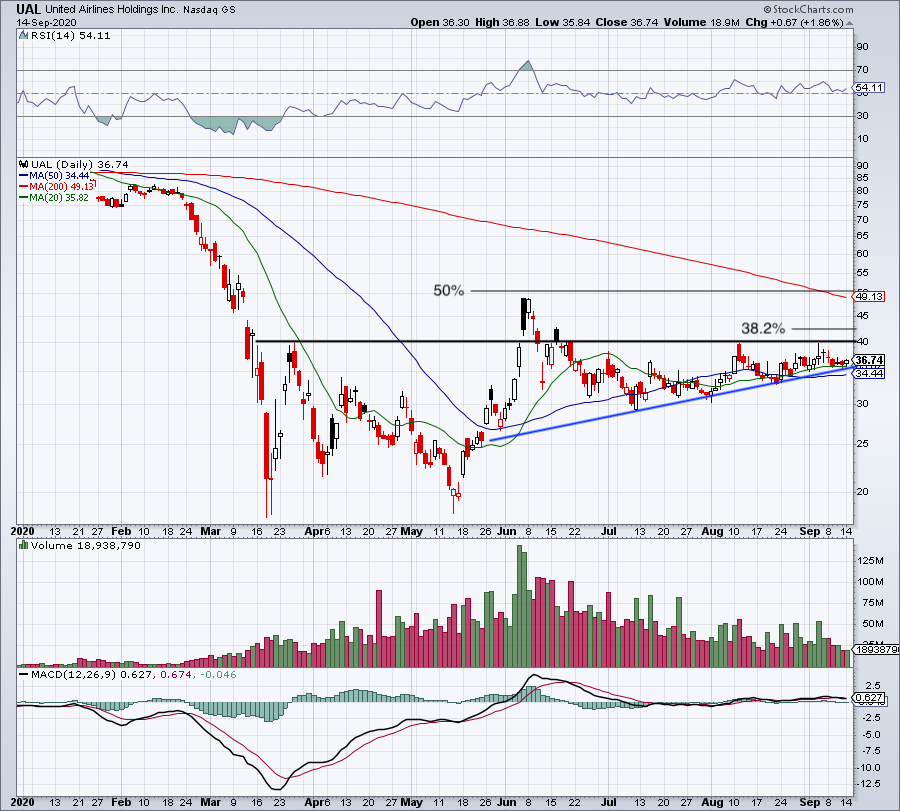 The 20-day and 50-day moving averages are guiding UAL stock higher, as uptrend support ( depicted by the blue line) lifts shares toward their resistance. For now, $40 has been the roadblock. If United can exceed that level, it puts the 38.2% retracement of $42.60 in play.

On the downside, any close below the 50-day moving average would make me cautious and cause me to look at last month’s low of $30.32.