Last year was probably the toughest in recent history on airline stocks. END_OF_DOCUMENT_TOKEN_TO_BE_REPLACED

GameStop (NYSE:GME) is up 85% over the past month through June 8. END_OF_DOCUMENT_TOKEN_TO_BE_REPLACED

It’s seemingly all bad news these days both off and on the price chart in Bank of America (NYSE:BAC) these days. But in this strategist’s view, that’s also sufficient reason to embrace a contrarian opinion and look to get long BAC stock.

Shares of Bank of America aren’t exactly well-liked these days on Wall Street. Not that they’re alone of course. Financials ranging from JPMorgan (NYSE:JPM), Wells Fargo (NYSE:WFC) to Goldman Sachs (NYSE:GS) have all been hit. Still, BAC stock is off nearly 26% since hitting an intermediate high back in March. And for the year, shares are off 17% compared to the S&P 500’s drop of just over 4%.

Behind the pressure, worries of an economic recession supported by an inversion of the yield curve and worsening Net Interest Margin or NIM trend have been instrumental in pulling the rug out from underneath Bank of America shares.

But that’s not all.

All told, there’s plenty of reasons to believe Bank of America is between a rock and a hard place. Nevertheless and alternatively, if you’re like me, that’s also a lot of evidence to support a contrarian point of view. What all this means is that it’s time to put BAC stock on the watch-list for buying. 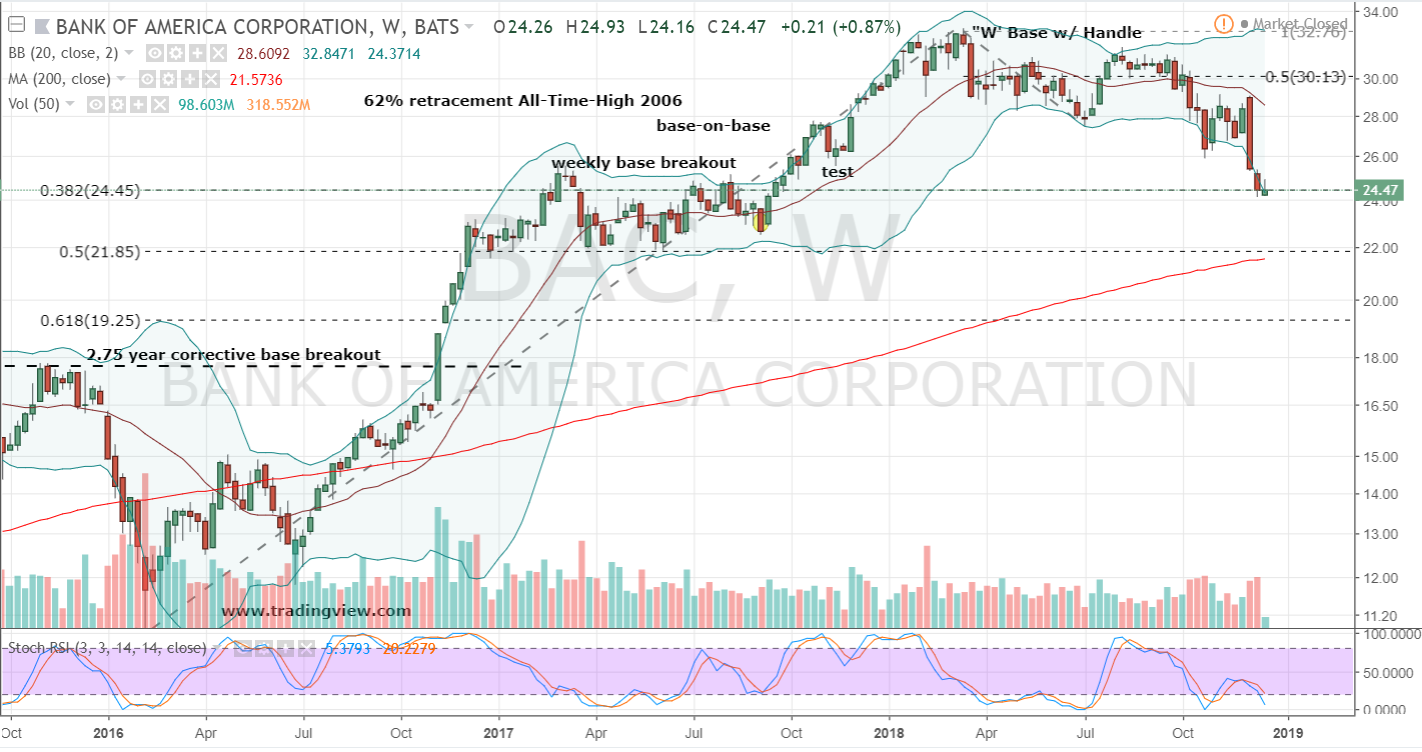 On the price chart, those investors fleeing BAC stock likely do see shares as being caught in a tough spot. Those same folks might also appreciate Bank of America as having entered in a bear market with shares off in excess of 20%, as well as being in a downtrend following November’s lower pivot high.

They’d be right too.

The good news is the bearish argument doesn’t preclude seeing “the end” in Bank of America stock, as being nearby in an optimistic sort of way.

Stocks in a similar position to BofA correct all the time. Currently, most stocks and markets are doing just that. But in the case of BAC stock, shares are now testing the upper range of a key longer-term support zone from roughly $22 – $24.50.

This area of technical support is backed by the 38% – 50% Fibonacci levels from Bank of America’s menacing 2016 low to 2018’s more cheerful intermediate high. As the weekly chart also offers, shares have the 200-week simple moving average for support. Furthermore, there’s several months of prior lateral price congestion which could back an intermediate low within BAC stock’s larger and still intact uptrend.

For investors agreeable with the latter contrarian point of view, I’d put BAC stock on the radar for buying versus an actual purchase today. With the Fed announcement later this week, shares just touching the upper support zone and stochastics not yet confirming a low, this makes sense.

If shares of BAC begin to firm up within our outlined technical support area, a confirmed weekly candlestick bottoming pattern would be the strategy of choice for entering into a long stock position versus simply trying to catch a falling knife.

As for managing a long position in BAC stock, I’d either use a stop-loss slightly below zone support or a stop that’s marginally below the candlestick pattern depending on market volatility and the relationship of the pattern low to the technical zone.