When to Buy Shopify Stock as Growth Plays Get Hit

Shares of Shopify were down big Monday, falling more than 7% at one point in the day. Shares ended the session at $358.67 though, down 5.7%.

The interesting part? Shopify stock even received a bullish price target increase before trading began. Analysts at Baird maintained their outperform rating on the stock, but bumped their price target from $370 to $410.

It comes after a very bullish call a few weeks ago, with Rosenblatt analysts bumping their price target from $410 to $481, the highest on Wall Street. Keep in mind, Shopify stock is still up 155% so far in 2019, even with the big pullback.

So that begs the question, is this high-growth monster heading for a big rebound or embarking on a serious correction?

Shopify stock spent most of 2018 trading between $125 support and $175 resistance. In the first quarter of 2019, shares erupted through resistance, surging hundreds of dollars per share to a high of almost $410.

Now pulling back, bulls need to see key support hold up, otherwise lower price may be in order. 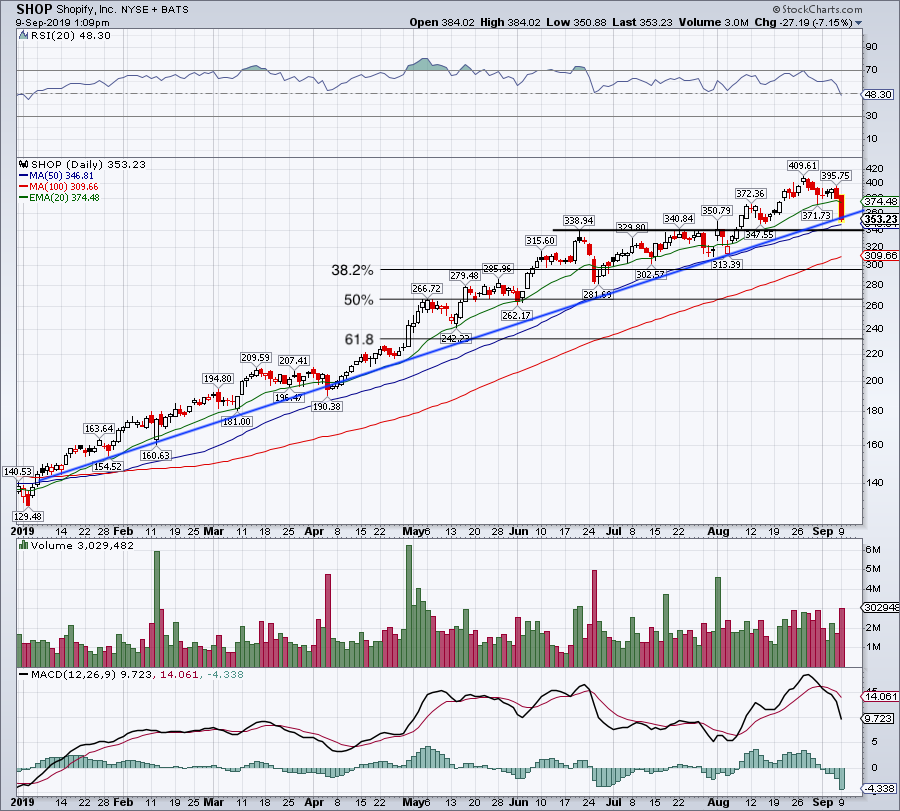 It's not really that surprising to see shares of Shopify get hit. In fact, many high-growth names are hurting, including The Trade Desk, Pinterest, Twilio, and others.

Last week, the lack of bullish price action in previous relative strength names was a concern of mine. Now we're seeing that follow through on the downside even though the overall stock market is holding up just fine.

For Shopify stock, shares are coming into the 50-day moving average at $347. Should it get there, SHOP stock will be down about 15% from its highs. A slight overshoot of this moving average could put Shopify stock down to $340, a very key breakout level from August.

As painful as the last few days have been in SHOP stock, holding $340 and the 50-day moving average would still leave bulls in control heading into the fourth quarter.

Conversely, keep in mind that the stock consolidated for roughly an entire year before tripling at one point in 2019. In other words, it may still need time to consolidate.

Should it decline to the 100-day moving average, SHOP stock will be down nearly 25% from its highs.

Remember to keep it simple. Above the 50-day moving average is good; below could invite more selling.