When Tesla Is a Buy-the-Dip Stock

Tesla (TSLA) isn’t rising much Friday, but its gains during the morning were enough to send shares to new all-time highs yet again.

At this point, it’s not unlike Apple (AAPL). Both stocks continue to make new high after new high and are up more than 100% from their respective 2019 lows. Will either of them pull back?

For Tesla, we took a look at the stock’s long-term trends and levels earlier this week via a weekly chart. This time, we’ll use a daily chart to zoom in a bit closer for some of the more relevant short-term levels.

In both scenarios, the stock could really use a breather, allowing bulls to rest and muster up the strength to take shares higher. Let’s look at the charts. 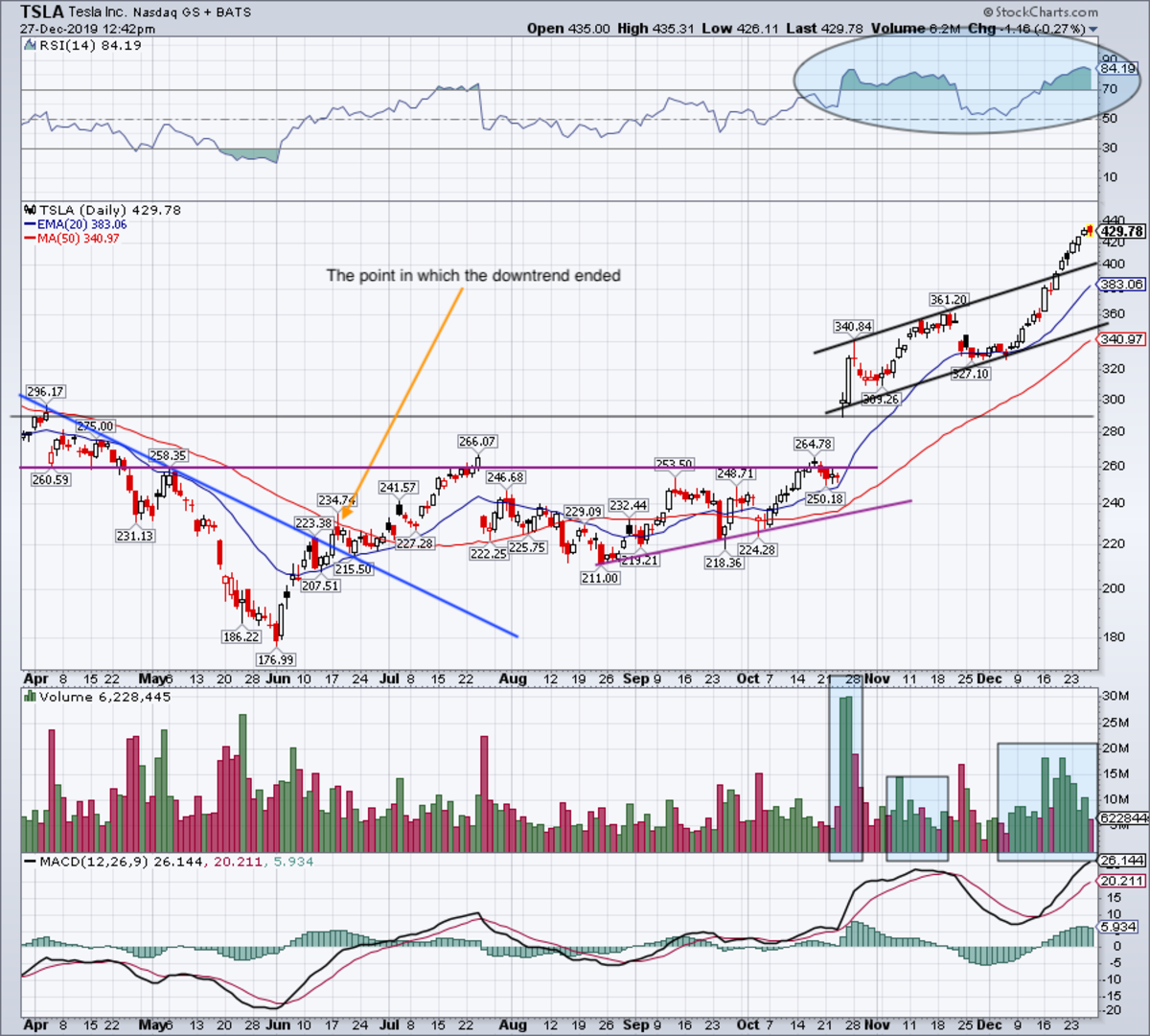 The chart for Tesla stock is pretty busy, but it’s also pretty simple.

Covering at the bottom is as hard as selling at the top, and Tesla gave bears plenty of reasons to be short coming into summer. However, the short thesis took a serious blow when the technicals shifted in favor of the bulls. That happened in mid-June, when Tesla stock closed above downtrend resistance (blue line).

To add even more confirmation that bulls were now in the driver’s seat, the stock retested this downtrend mark a few weeks later and found it be support, not resistance.

In October, Tesla used its earnings report as a catalyst for a powerful breakout over $260. After reporting earnings, shares were trading in a well-defined channel (black lines). Tesla stock is no longer channel-bound, after breaking out more than a week ago and continuing higher.

The volume and relative strength have been impressive, but it can’t last forever. Tesla may persist up to $450 or even higher, but all it means is one thing: Bulls will be looking to buy the dip until bears regain control.

The first dip-buying level comes on the backside of former channel resistance, currently near $400. Either that or the 20-day moving average, whichever comes first. Below that and channel support will be in play, along with the 50-day moving average.

Tesla stock is going somewhat parabolic, so timing the pullback - both when it will happen and its depth - is very difficult. If Tesla breaks trend and thus loses its buy-the-dip status, bulls will need to be patient and wait for buyers to re-establish control.