For the first time in a long time, concerns about inflation are END_OF_DOCUMENT_TOKEN_TO_BE_REPLACED

"We Got Ourselves A Full-Blown Mania…"

I often get asked by younger traders what it was like to trade in the DotCom bubble. When I tell them stories about the madness that prevailed at the time, they shake their heads in disbelief about how stupid my generation could have been. They have difficulty understanding the mania that gripped investors. To them, it seems so obvious that stocks were preposterously over-valued, but let me assure you, fighting that tidal wave of buying was more difficult than Lindsay Lohan staying sober for her probation meetings. 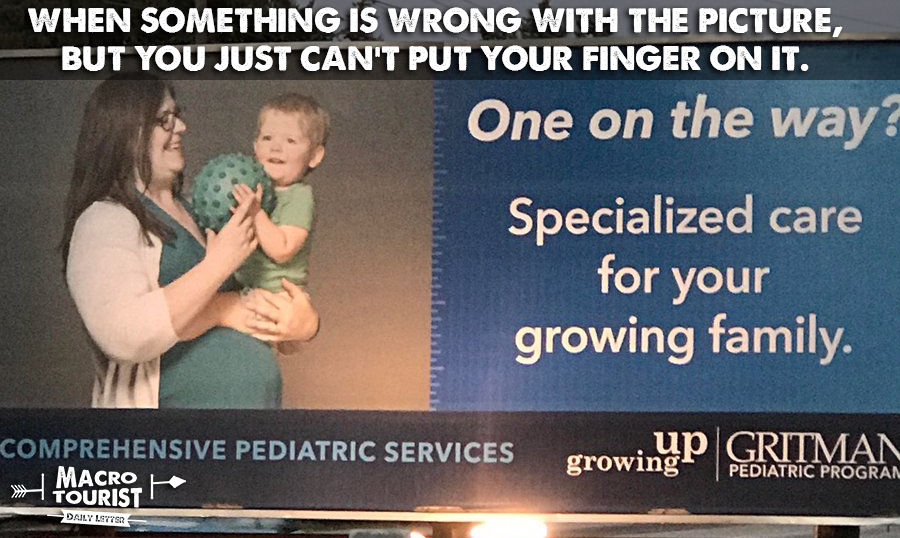 Well, my millennial readers, I will let you in on a little secret. You guys are in the midst of blowing your very own bubble. Don’t bother sending me emails or tweets about how I don’t know what I am talking about. How I am an out-of-touch-old-school-finance guy who doesn’t understand the new revolutionary technology that is about to take over the world. I understand all too well how committed your generation is to this blockchain technology. I get it. It’s game changing. It’s still cheap when you compare it to other assets. It will forever change the world of finance. In fact, it will change almost everything. Distributed networks have the ability to cure world hunger, find all the socks that disappear in the dryer and let you eat whatever you want without getting fat. It’s just all-around fan-freaking-tastic.

In fact, not only is it game-changing, but just yesterday a fellow in a t-shirt and jacket (ala 1986 Miami Vice), hopped on Bloomberg TV and told me how I need to consider using a “different mental model” when valuing Bitcoin. Spencer Bogart, head of research at BlockChain Capital, actually said the following with a straight face:

“Overall we need to consider a different mental model than we use for equities. In a typical equity, we think about that supply demand imbalance of buyers and sellers, as price rises, the amount of people willing to sell a particular stock increases. And meanwhile, demand tends to fall off as financial ratios like price to earnings or enterprise value to revenue tend to get very high.

It’s the opposite case with Bitcoin. If we think about the supply side, probably 80% to 90% is locked down with long-term holders that have sincere conviction in this asset. They have been through up markets, down markets, hyper-volatile markets, and multi-year bear markets. If they didn’t sell at $10,000, I don’t know why they would start selling at $20,000. So there is not a lot of supply that is about to come onto the market.

And on the demand side, Bitcoin has this weird feature where it is kind of reflexive. People took Bitcoin much more seriously when it went over $10,000 than they did when it was only at $1,000. Similarly they will do the same when it is over $20,000 as well…” 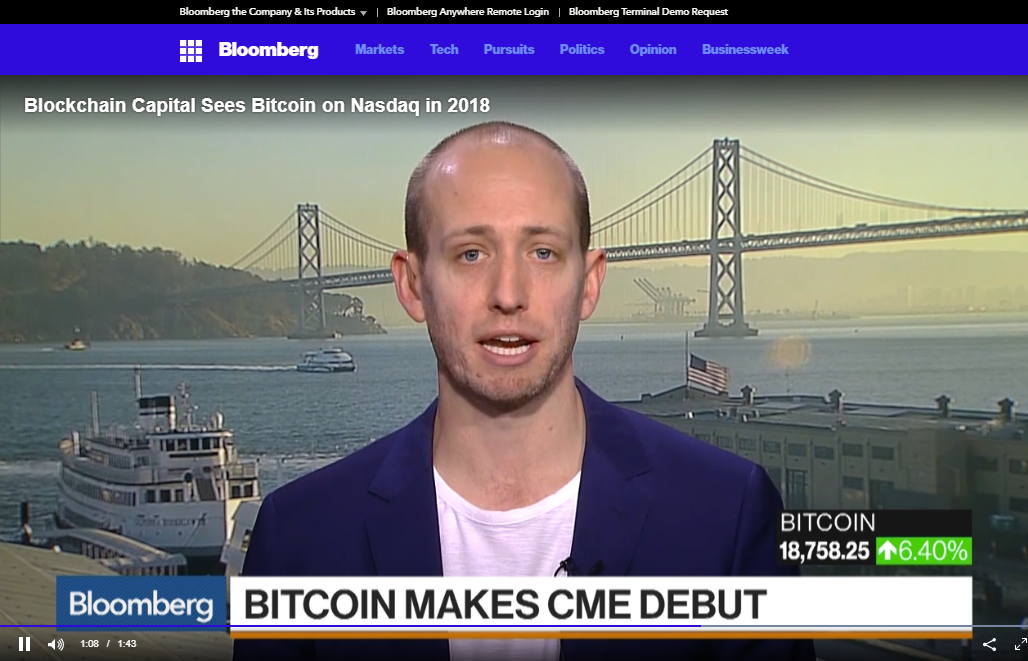 According to Bogart, Bitcoin has reversed the laws of supply and demand. By his logic, it’s a better investment at $20,000 than it was at $1,000.

I have heard these sorts of arguments before…. in 1999. Back then, the logic was that the more a company spent acquiring eyeballs, the more it was worth. The market actually punished companies that didn’t spend money quickly enough.

Regardless of the long-term investing merits of Bitcoin and Blockchain technology, we have entered into a period where it is difficult to deny that it has turned into a full-blown mania.

Don’t believe me? Have a gander at the two-day stock chart of LongFin Corp, whose tag line is appropriately, “calculating the incalculable”: 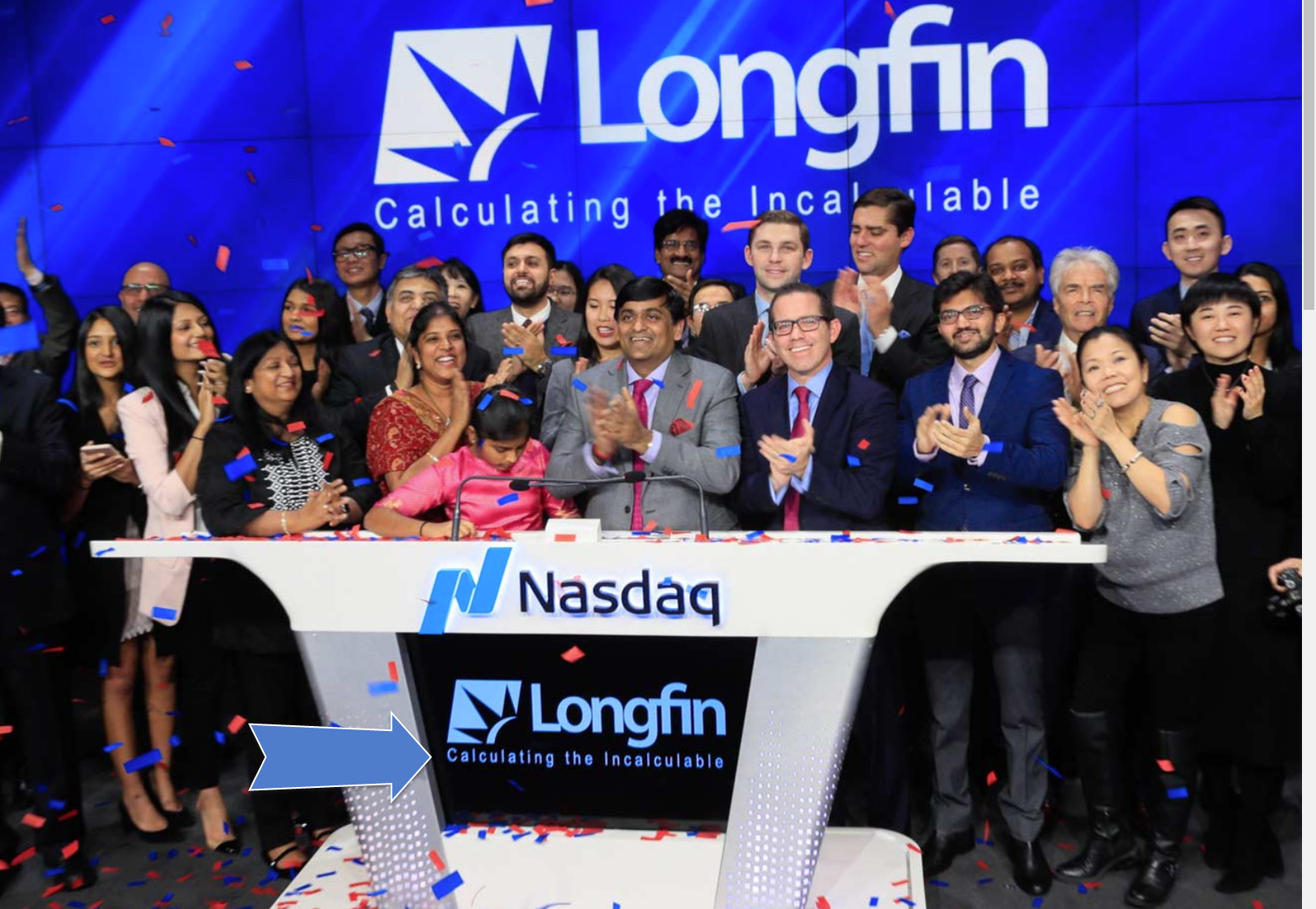 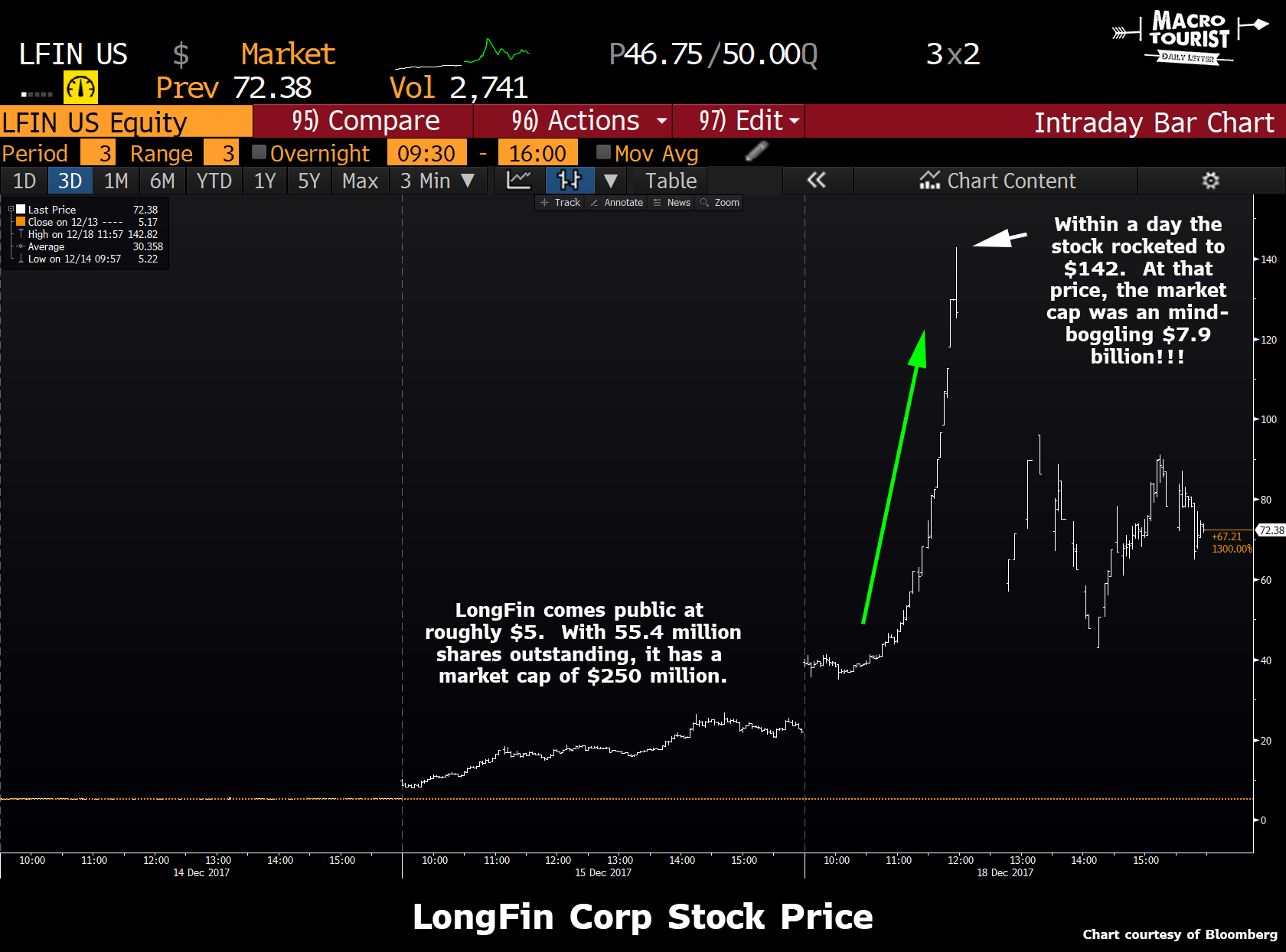 LongFin came public on Friday at approximately $5. At that price, it had a market cap of $250 million. Given the company’s financials, it was probably rich, but hey – it’s a bull market. 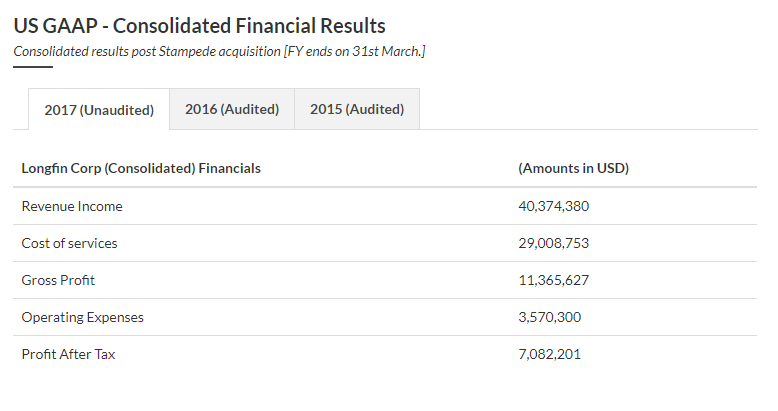 Then over the weekend, they announced they had bought a “blockchain company.”

In the course of the next trading day, the $250 million market cap skyrocketed to almost $8 billion. And that’s assuming that we have the total number of shares correct, which isn’t a given. 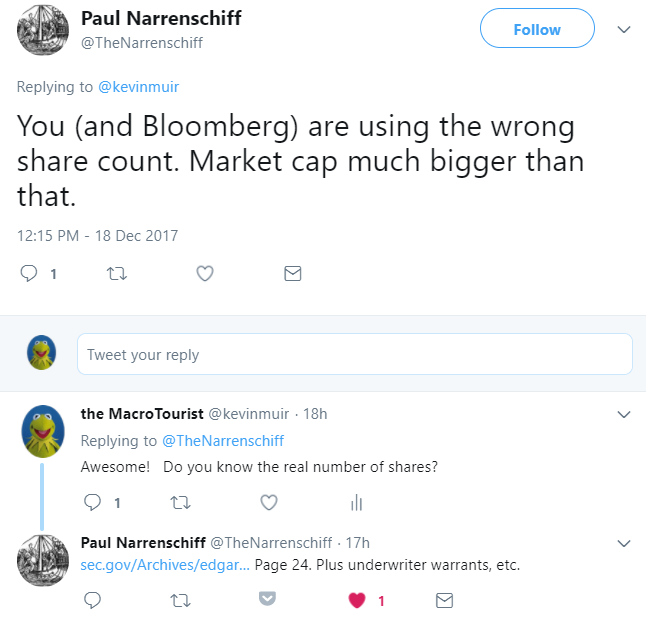 Maybe the $8 billion is conservative. The market cap is most likely over $10 billion.

Stop and think about that. With one press release, $10 billion of wealth was instantly created.

And it’s not just LongFin.

Dial the chart of Riot Blockchain. 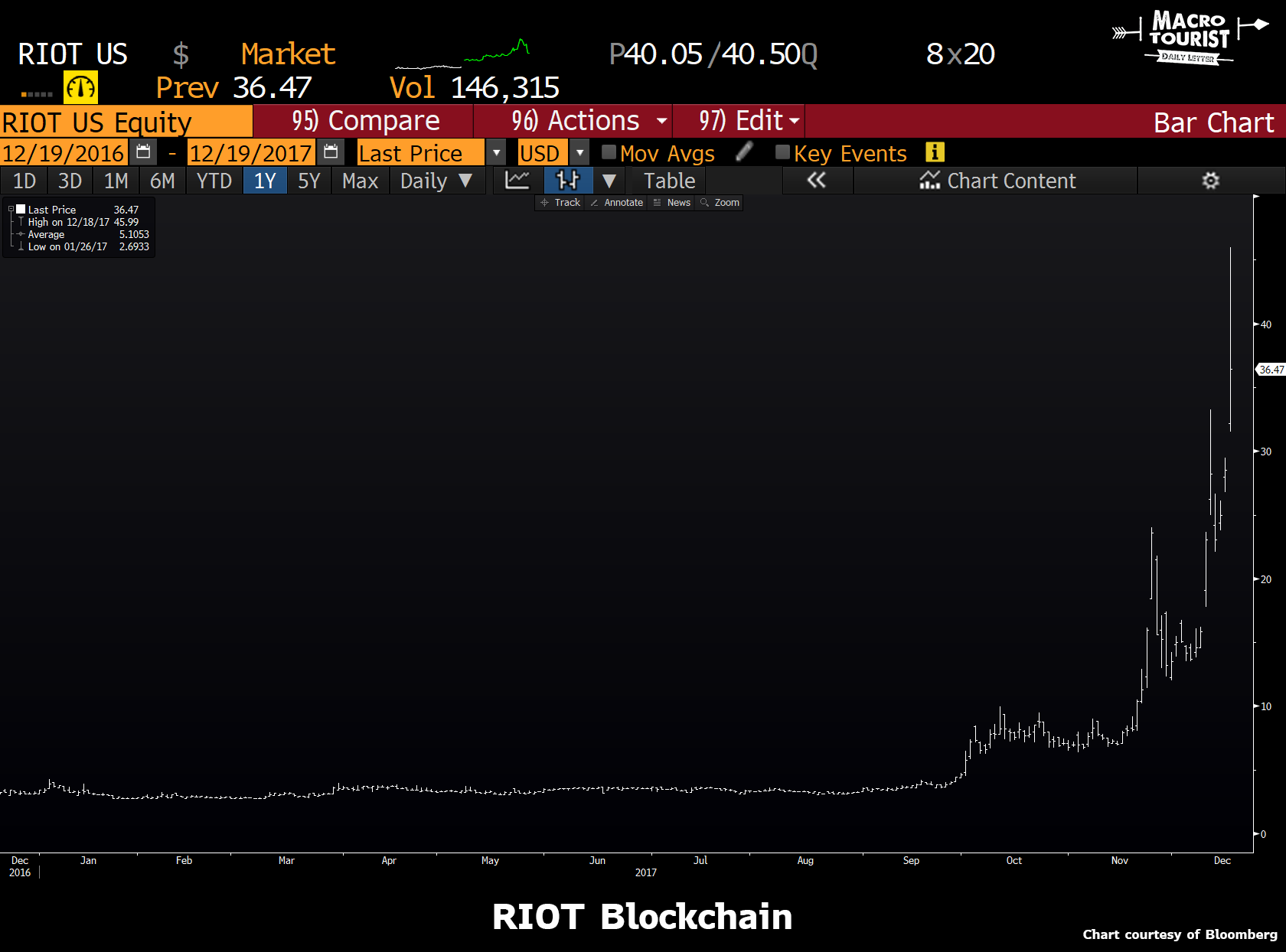 And then take a moment to peruse their investor presentation. 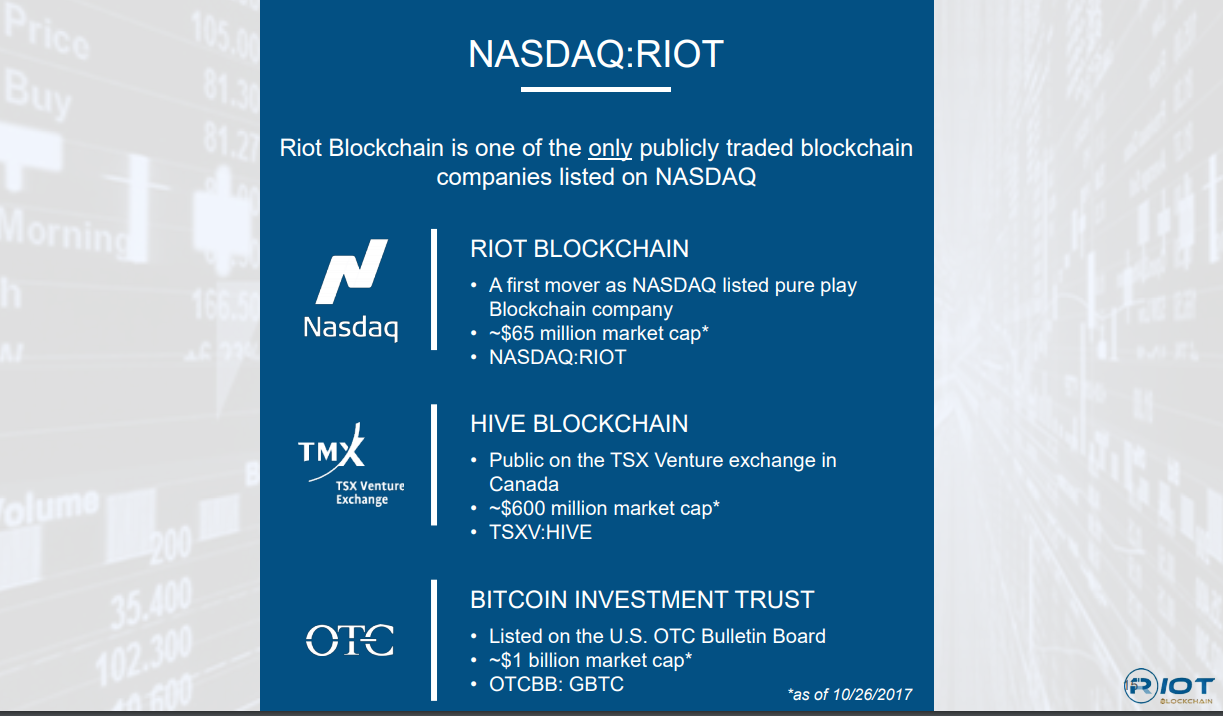 I am not suggesting you should run out and short these names. The volatility is massive, and let’s face it, Bitcoin, even with the zaniness, it is still one of the best performing risk-reward assets on the board.

Have a look at this great chart from LightField Capital: 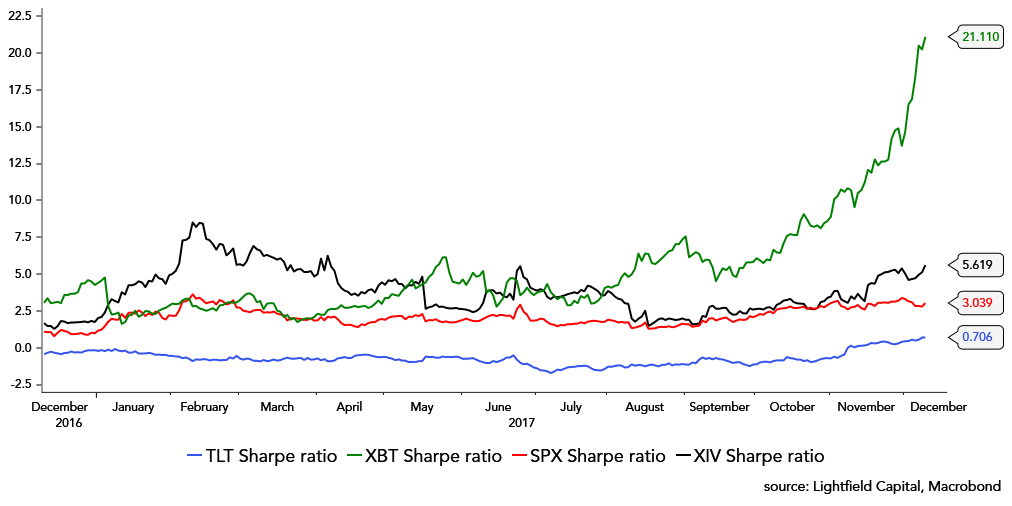 Bitcoin’s Sharpe ratio is out of this world. It somehow even makes shorting equity volatility look like a bad trade.

So yeah, anyone that has called for this trend to reverse has looked like a chump. I am not going to wander into this trap and claim this is the top.

But all I request is for you to stop asking me what it was like to trade in the DotCom bubble, because you already know… It was just like today.