AT&T (NYSE:T) continues to face strong pressures on multiple fronts and the END_OF_DOCUMENT_TOKEN_TO_BE_REPLACED

Over the trailing year, we’ve seen one of the most paradoxical developments END_OF_DOCUMENT_TOKEN_TO_BE_REPLACED

For the first time in a long time, concerns about inflation are END_OF_DOCUMENT_TOKEN_TO_BE_REPLACED 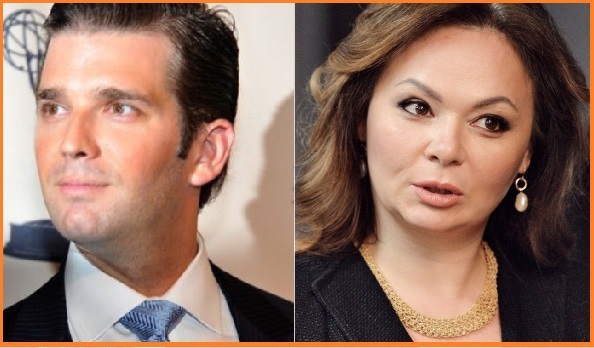 Less than a week after news broke of Donald Trump Jr’s meeting with Russian attorney Natalia Veselnitskaya – the delayed “Boom” to deep state cheerleader and James Comey friend Benjamin Wittes’s cryptic “Tick, Tick, Tick” tweet, Ms. Vesselnitskaya has been revealed as an anti-Trump shill whose meeting with Trump Jr. appears to be a deep-state setup used to justify the FISA warrant which the Obama administration used to spy on the Trump team via ‘unmasking‘ – which was accidentally revealed by former Obama admin official Evelyn Farkas on live TV.

Moreover, the meeting in Trump Tower between Veselnitskaya and Trump Jr. was arranged by Rob Goldstone, is associated with Fusion GPS – the firm behind the largely-debunked salacious 35 page ‘pissgate’ dossier designed to take down Donald Trump, yet which failed miserably after being largely debunked.

Trump Jr. diffused an upcoming New York Times piece on the meeting by issuing a statement and Tweeting copies of the emails exchanged in the setup of the sit-down, scooping NYT reporter who had a Twitter “he broke me” meltdown. 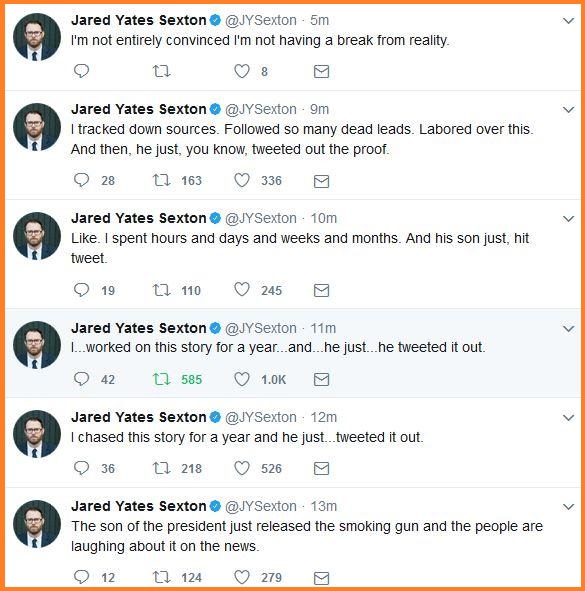 (And just how did Sexton know about this a year ago?)

Meanwhile, Trump Jr. said that Veselnitskaya had no meaningful information and the meeting was a total dud.

Her Facebook page is littered with anti-Trump posts, and she either attended or at least posted a picture from an anti-Trump rally on January 22nd, 2017.

Natalia Veselnitskaya is extremely anti-Putin and anti-Trump. Anyone who spends 5 seconds looking at her FB would see that pic.twitter.com/LqDW2eJ62z 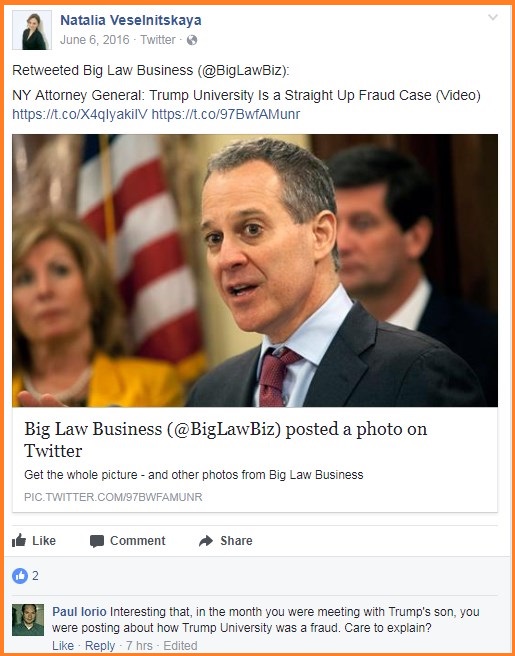 And as The Gateway Pundit and Conservative Treehouse report, Veselnitskaya was pictured in the front row at a House Foreign Affairs Committee meeting on June 14th, 2016 behind the anti-Russia-Russian US Ambassador, Michael McFaul- just five days after the reported meeting with Trump Jr.

It should be noted that Ambassador McFaul was very publicly discussing the ‘Muh Russia’ conspiracy narrative in the media and appeared on numerous NBC and MSNBC broadcasts during the 2016 campaign, and immediately after the election.

Additionally, it was Michael McFaul who was the architect of the Obama/Clinton “Russian Reset”, that eventually led McFaul to becoming the Ambassador to Russia (NYT Link). 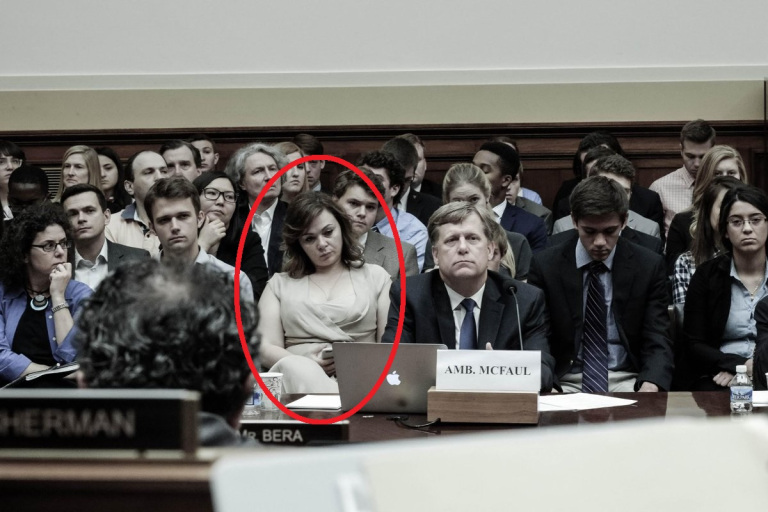 McFaul was notably kicked out of Russia after he allegedly tried to help overthrow President Putin.

Michael McFaul, the U.S. ambassador in Moscow from 2012-2014, was accused by Russian state television of seeking to orchestrate the overthrow of President Vladimir Putin after hosting opposition activists and Kremlin critics at the embassy in his second day on the job.  (Politico Link)

Furthermore, Veselnitskaya posted a picture taken in John McCain’s office in December of 2015, 6 months before the meeting in Trump Tower.

Natalia Veselnitskaya posted a pic from inside McCain’s office in Dec 2015 pic.twitter.com/tD7jD8olju

Recall that the Dept. of Justice drew up the original FISA application to surveil the team, which was rejected outright by the court. The second application – written more narrowly, was denied in July. Finally – three weeks before the election on October 15th, the order was finally granted for three of Trump’s associates – ostensibly the three who were in the meeting with Natalia Veselnitskaya – Trump Jr., Trump advisor  Jared Kushner, and former campaign manager Paul Manafort.

Natalia Veselnitskaya was denied an entry visa into the United States in 2016, only to be overruled by a NY Court so she could participate in an lawsuit opposite fired US Attorney Preet Bharara, which the U.S. District Court of New York later granted on appeal. Why was her entry initially denied?

The actual date of the arguments in the case U.S. -v- Prevezon Holdings was the EXACT SAME date as the meeting in Trump Tower – June 9th 2016 CASE LINK –Conservative Treehouse

And as The Independent reported on Monday, the man who arranged the Trump Jr. “setup” is music publicist and friend of Don Jr. – Rob Goldstone – is reportedly linked to Fusion GPS – the firm which Democratic operatives retained to develop the now infamous (and largely debunked) 35 page ‘pissgate’ opposition research dossier on Donald Trump.

A spokesman for the President’s legal team told The Independent they now believed Ms Veselnitskaya and her colleagues had misrepresented who they were and who they worked for.

“Specifically, we have learned that the person who sought the meeting is associated with Fusion GPS, a firm which according to public reports, was retained by Democratic operatives to develop opposition research on the President and which commissioned the phony Steele dossier.” -Mark Corallo

And from the Daily Caller

The Washington Post suggested the person was Rob Goldstone, a music publicist and personal friend of Don Jr. Don Jr. has neither confirmed nor denied Goldstone’s involvement.

Whoever the acquaintance was, subsequent reporting by Circa News said that members of the President’s legal team have confirmed that the acquaintance “who sought the meeting is associated with Fusion GPS.”

In closing – Why would a Russian attorney who hates Donald Trump and has ties to the ‘pissgate’ dossier firm – Fusion GPS, agree to provide Trump Jr. with opposition research on Hillary Clinton unless it was a setup?