Last year was probably the toughest in recent history on airline stocks. END_OF_DOCUMENT_TOKEN_TO_BE_REPLACED

GameStop (NYSE:GME) is up 85% over the past month through June 8. END_OF_DOCUMENT_TOKEN_TO_BE_REPLACED

I want to show you 10 funds that yield up to 9.4% and that you should sell now (or steer clear of if you don't own them).

Of course, near-10% yields are attractive, and I often see attractive funds yielding as much as (and more than) the 10 funds I'll reveal in a second. But sometimes a big yield is too good to be true, and that's the case here.

The reason I'm saying this now? These funds have been on a tear in the last few months, which is far out of character for both them and their asset class.

Utilities are typically seen as a boring investment and, historically, a good one to be in. An investor who stuck to just utilities over the last 20 years has crushed the S&P 500 SPDR ETF ( SPY ) , even if they simply bought the Utilities Select Sector SPDR ETF ( XLU ) and left it at that: 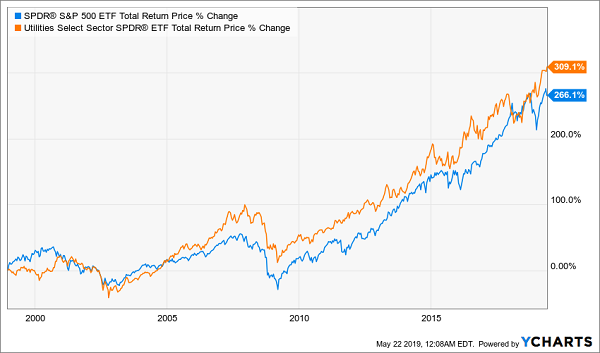 This is one reason why I love utilities for the long term, but sometimes the market gets irrational and bids these stocks up too much.

Now is such a time.

There are two trends at play here. The first involves all utilities funds; after a short dip in late 2018, investors are running back to utilities, as they are with many other investments. The idea is that utilities fell too hard in late 2018, creating value that needs to be scooped up now.

It's a good hypothesis, and it's true for many assets. But it's not true for utilities.

Too High, Too Fast 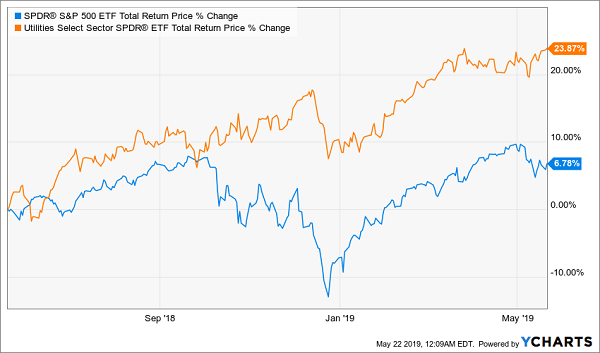 What investors forget is that utilities didn't go down in 2018; in fact, they were one of the few asset classes to have a positive year, gaining about 5%. That means they're now up nearly 24% in the past year and 16.7% since the start of 2018.

That's just too much too soon.

Why? Because utilities aren't terribly surprising assets. They buy commodities and produce electricity and other, well, utilities for consumers, while hedging their commodity exposure. It's a predictable industry, which makes for a strong cash flow and a high yield (XLU's 2.9% yield is one of the highest among passive stock funds).

While that means XLU is best avoided now, there are also warning signs in the world of utility-focused closed-end funds (CEFs) . Of the 10 utilities CEFs out there, seven have had year-to-date market-price returns exceeding their NAV returns or the performance of their underlying portfolios: 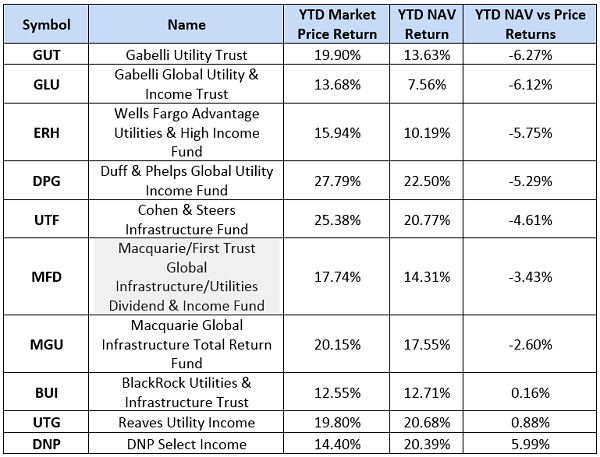 With the exception of DNP, these funds have pretty much priced in their NAV returns (which are all exceptional) for 2019, which curbs their upside.

That might make DNP look appealing here especially when you consider that it has a decent track record compared to its peers: 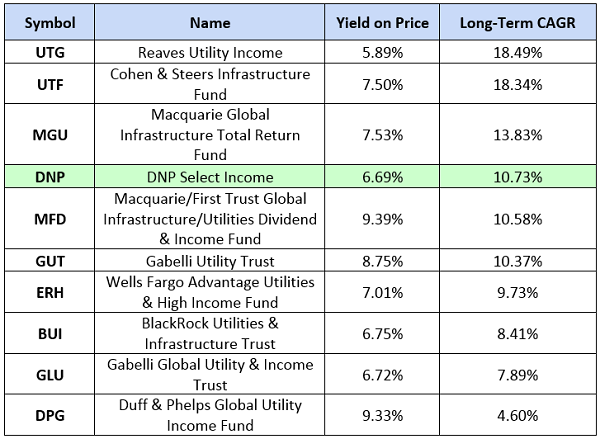 With an annualized 10.7% return over the nine-plus years since its IPO, DNP is just a bit better than a typical utilities CEF, even if it has trailed XLU's 12.5% annualized return over the same period. But DNP's reliable dividend and 6.7% yield more than make up for that. With this in mind, DNP isn't a bad fund, despite the market privileging other utilities funds over it.

Unfortunately, that doesnaEURtmt mean DNP is an option for income investors right now. Remember, one of the key benefits of buying CEFs is getting a strong collection of investments at a discount, yet DNP currently trades at the second-highest premium of any utilities CEF: 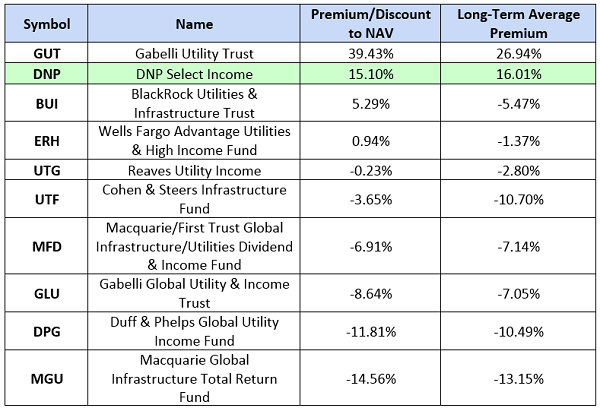 While DNP's 15% premium is nowhere near as massive as GUT's near 40% premium, it's still a large amount that could feasibly disappear any minute if the market decides to turn on utilities which appears to be an imminent threat.

And while the discounted CEFs above could all be considered attractive, only GLU, DPG and MGU have discounts wider than their long-term averages. But in the case of GLU and DPG, that discount makes a lot of sense; both funds are duds, being the worst performers in the CEF utilities universe and trailing the index by a wide margin.

And as for MGU, its foreign exposure at a time when global growth is slowing and American growth is strengthening makes it a high-risk venture which explains its big discount.

The bottom line? Utilities are a reliable sector for income, and utilities CEFs are a great high-yield way to buy into that sector, but now is clearly not the time to buy these funds.