Cheap stocks continue to be the land of opportunity for aggressive investors.We END_OF_DOCUMENT_TOKEN_TO_BE_REPLACED

Volatility Returns To Stocks – Paradise For Traders, A Nightmare For Investors

The memories of the stock market correction that took place during the fourth quarter of 2018 had just about faded into the market's rearview mirror as the indices reached new all-time highs in late April. It took four months for the stock market to make back all of its losses, and the price action provided market participants with another example that every risk-off period where the market looks like it is going to zero is a buying opportunity. Hindsight is twenty-twenty, but when volatility picks up in markets, things can get dicey, and fear can cause market participants to act irrationally.

The marginal new high in stocks led to two ugly weeks in the S&P 500 index the nearby E-Mini futures contract dropped from 2961.25 to lows art 2799.75 over the past two weeks. The decline of 5.5% caused many market participants to buy price insurance in the form of options to protect profits and long positions in equities. As the market was on its way to the new record high, the volatility index fell to its lowest level in 2019 and since August 2018. The ProShares VIX Short-Term Futures ETF product (VIXY) also fell to its lowest level of this year when the VIX reached rock bottom.

The VIX index measures the level of implied volatility of put and call options on stocks in the S&P 500 index. Implied volatility is the primary determinate of option prices as it is the level of price variance the market believes will occur in the future. Historical volatility is the actual level of price variance that occurred in the past, but the implied measure is what the market's consensus believes will happen over the coming days, weeks, and months.

Since stocks tend to take the stairs higher and the elevator to the downside, market participants often hedge their risk positions using put and call options which serve as price insurance on the up and downside. A long call option protects a short position, while a long put option is an insurance policy for a long position on a stock. When stocks begin to correct to the downside, there is often a rush to purchase options which cause the VIX to rise. Therefore, the VIX acts inversely to the leading stock indices as it rises during correction periods where stocks are declining. 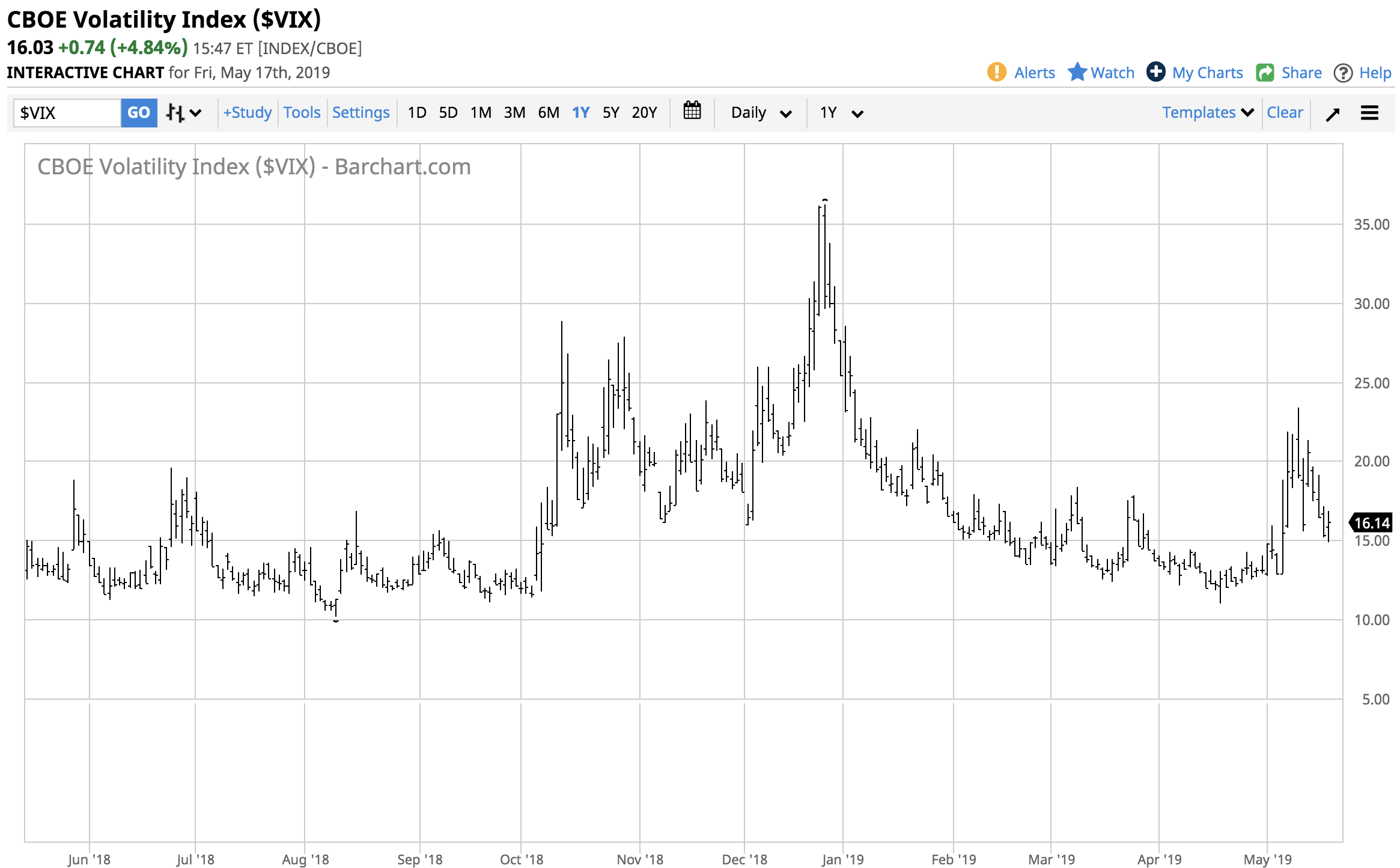 The chart of the VIX index over the past year shows that the measure fell to a low at 11.03 on April 17 which was the lowest level since August 2018. The VIX fell to a level that was even lower than when the stock market hit all-time highs in late September 2018 in mid-April as the leading indices were on a course to reach new record highs. After reaching the low at just over 11, the VIX traded in a range from just over 12 to a little over 14 until the beginning of May, but last week, the volatility index exploded and traded to a high at 23.38 on May 9 which was more than double the mid-April level. On Tuesday, May 14, the VIX was trading just under the 16 level at the end of last week.

The sudden spike in volatility was a result of the breakdown in trade negotiations between the US and China. In April, the stock market was optimistic that a deal between the two nations was just around the corner. However, last week, news that the Chinese backtracked on previously agreed upon terms led to new and higher 25% tariff levels from the US on May 10. While the negotiations will continue, China retaliated on May 13 with tariffs which rocked the stock market as the optimism over recent weeks and months turned to pessimism. The protectionist policies threaten global economic growth and stocks expressed their disappointment by correcting lower.

The stock market stalled after making a marginal new high, and the escalation of the trade dispute injected volatility into the market as China is likely to suffer more than the US under the higher tariff rates over the coming weeks and months. China exports more to the US than vice versa. The S&P 500 SPDR moved from 294.95 on May 1 to 286.11, a decline of 3% over the period. Meanwhile, the Chinese Large-Cap iShares ETF (FXI) dropped from $44.98 to $41.00 or 8.8% over the same period which reflects the pressure the escalation in the trade dispute puts on China's economy compared to the US economy.

Meanwhile, trade is not the only issue that is causing volatility to move higher these days.

Iran On The Horizon

The US walked away from the Iran nuclear nonproliferation agreement of 2015 last year. While new sanctions on the theocracy in Teheran took effect in November 2018, the Trump administration granted six-month exemptions to eight countries that purchase crude oil from Iran. In April, the US President said that the exemptions would end as he tightened the economic noose around the necks of the leadership of Iran raising the temperature in the Middle East. Iran had warned that if they cannot sell their oil to the world, they would prevent other countries in the region from exporting their crude oil.

So far this week, there have been two attacks on Saudi oil tankers near the UAE and one strike on a pipeline. All of the attacks have the fingerprints of the Iranians. The USS Abraham Lincoln warship is in the region as the Strait of Hormuz is a chokepoint for logistics. 20% of the world's seaborne crude oil travels through the narrow waterway on the coast of Iran each day. The rhetoric has been flying back and forth between Washington and Teheran, and it is unlikely that the theocracy will back down any time soon. The US declared that the Iranian Revolutionary Guard are terrorists, and Iran said all US troops in the Middle East are the same. Iran could become a geopolitical nightmare for the US and the rest of the world if hostilities break out over the coming days and weeks. At the same time, any violence or actions that impact the production, refining, or logistics when it comes to crude oil will increase the price volatility of the energy commodity and markets across all asset classes including stocks.

On the other side of the world in Asia, the trade dispute between the US and China is not the only problem the Trump Administration has on its plate these days. The attempt to encourage North Korean leader Kim Jong Un to denuclearize ran into a roadblock when the second summit ended abruptly over a disagreement between Chairman Kim and President Trump. Since then, the North Koreans began testing rockets and missiles again, and Chairman Kim reached out to both China and Russia for support when it comes to relations with the US. The short-term period of rapprochement between the US and North Korea appears to have ended, and a resumption of tense relations could be on the horizon. Geopolitical uncertainty weighs on global economic growth, and disappointment over a failure to reach a deal with North Korea is yet another issue that could be on the horizon if the situation deteriorates over the coming months.

Volatility is back in the stock market, and it looks like it is here to stay for a while given the many issues facing the world these days. The ProShares VIX Short-Term Futures ETF product is a short-term trading tool that moves higher and lower with the VIX index. The fund summary for VIXY states:

The investment seeks investment results, before fees and expenses, that over time, match the performance of the S&P 500 VIX Short-Term Futures Index for a single day. The index seeks to offer exposure to market volatility through publicly traded futures markets and is designed to measure the implied volatility of the S&P 500 over 30 days in the future.

The most recent top holdings of VIXY include: 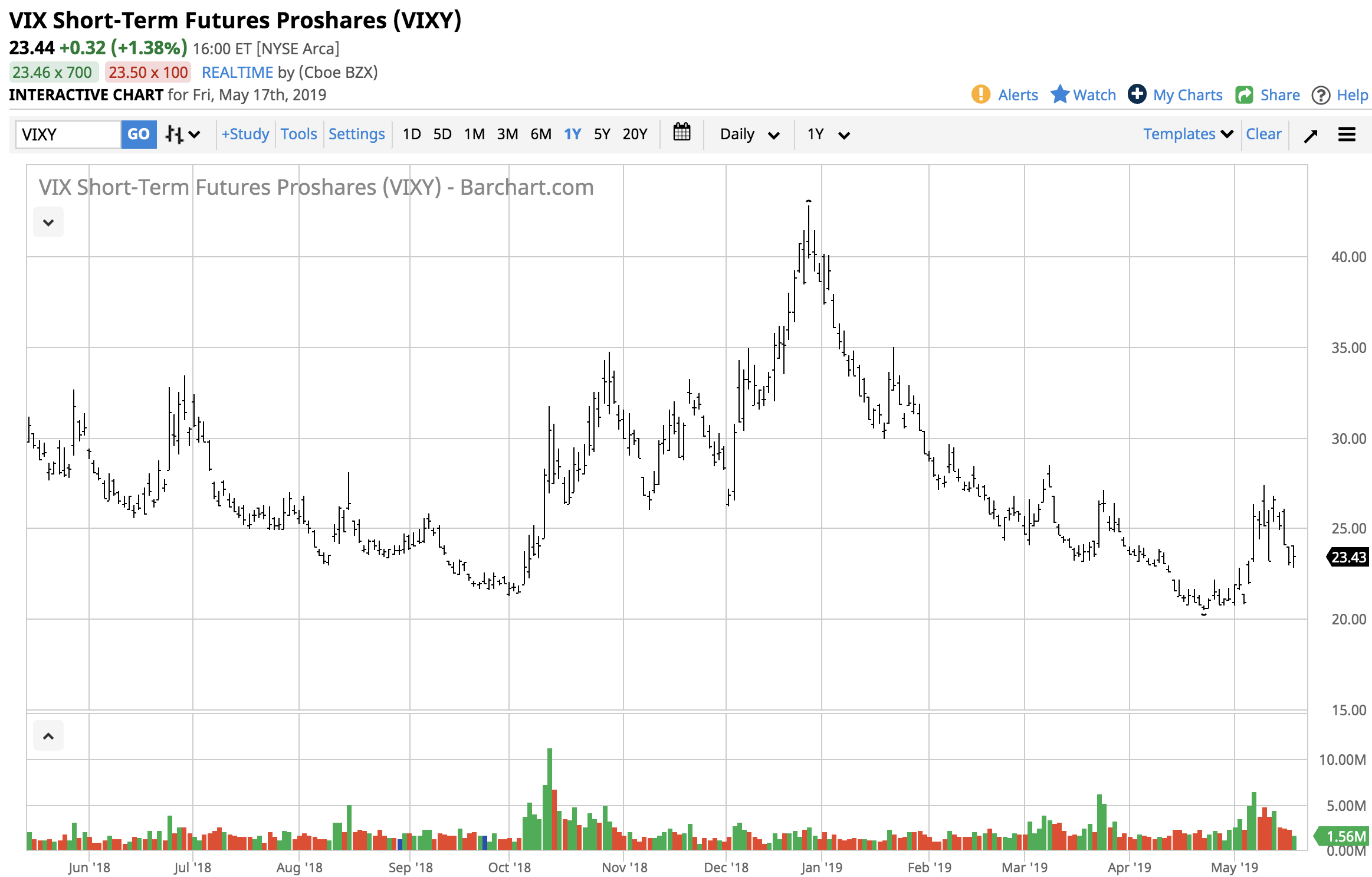 Over the same period, VIXY climbed from $20.44 to a high at $27.36 per share or 34%. VIXY is a tool that rises and falls with the VIX for those who do not venture into the futures market.

Volatility has returned to the stock market, and the many issues facing the world could mean that any dips in the VIX on recoveries in stocks will be a buying opportunity over the coming weeks and months. A trade deal with China would come as a shock at this point, and it would likely send stocks to new highs. However, Iran, North Korea, and other hotspots in the world could provide the next dose of rocket fuel for the VIX even if there is a solution on the trade front.

The VIX is a metric that reflects fear and uncertainty in markets. There are more than a few factors that will make the stock market a paradise for traders and a challenge for investors for as far as the eye can see.