Our man Jay Powell is talking a little more about raising rates. END_OF_DOCUMENT_TOKEN_TO_BE_REPLACED

Cheap stocks continue to be the land of opportunity for aggressive investors.We END_OF_DOCUMENT_TOKEN_TO_BE_REPLACED

When I was younger one of my favorite board games to play was Monopoly. Don't ask me why because I couldn't tell you. Of course like any little boy, one of my favorite properties to own were the railroads. They were always a consistent source of income in the game.

With only a small position in Norfolk Southern (NSC) in my portfolio, I felt it was time to look at one of the largest railroad networks in the United States, Union Pacific (UNP), to see if I could start building out the railroad collection from my childhood.

The investment strategy that most appealed to me was dividend growth investing. That means finding companies that pay and grow their dividends to owners. The reason the strategy appealed to me was (1) who doesn't love getting paid for owning something and (2) the market can stay irrational longer than you would expect. By shifting the focus to dividends it keeps you satisfied when the market is irrationally depressed and the capital gains will eventually come if the business is of high quality. 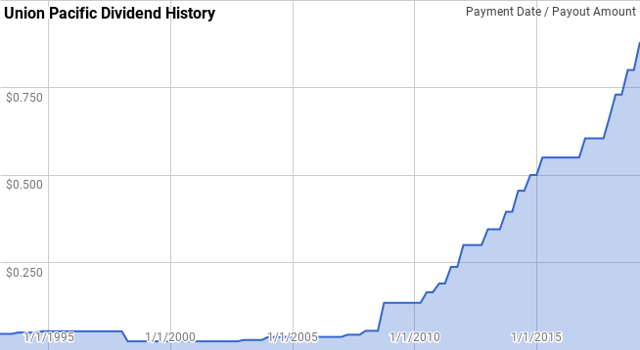 As you can see above, Union Pacific doesn't have the cleanest dividend history with a cut, a freeze and massive growth over the last 20 or so years. Obviously, consistency hasn't been the name of the game for Union Pacific although it has improved significantly coming out of the "Great Recession." Union Pacific has now grown dividends for 12 consecutive years, giving the company the title of Dividend Contender. The Board of Directors approved a 10% increase in the quarterly payout in early February as well.

How Does Union Pacific Make Money?

Union Pacific is the second-largest freight railroad in the United States with over 32,000 miles of rail network. The rail lines connect important hubs on the West Coast, Midwest and Southwest regions of the United States. Union Pacific has access to major gateways such as Los Angeles, Houston, New Orleans, San Francisco, El Paso, St. Louis, Omaha, Salt Lake City, Minneapolis/St. Paul, Chicago and many others.

As a freight railroad Union Pacific moves a variety of commodities including grains, fertilizer, coal, sand, petroleum products, construction materials, plastics, chemicals and several other as well as finished products. 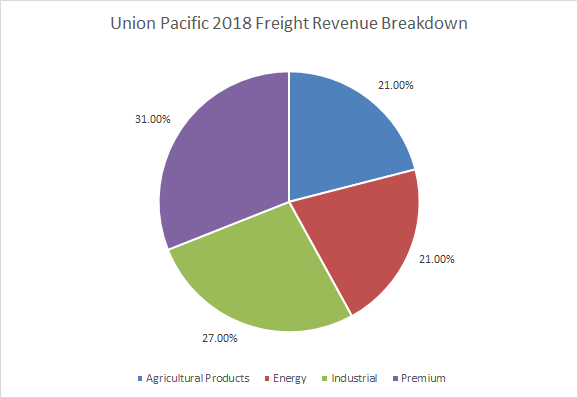 Union Pacific enjoys the benefits of a combination moat made up of (1) regulatory via right-of-way, (2) low cost provider since rail shipment, especially over long distance, is the cheapest way to move large quantities of goods, and (3) its rail network connects critical gateways/hubs for both domestic and international shipment. The combination of these 3 moat styles has allowed Union Pacific to continue to operate and grow for over 150 years.

High quality companies with advantages over their competition will show it in their numbers. Those advantages can be scale, pricing power, regulations, but rest assured their strength of the business can be seen in their financials.

I consider the 10% threshold to be the sign of a strong cash generating enterprise and Union Pacific has been above that level every year starting in 2011.

Alternatively, I like to examine the profitability of a business through its free cash flow return on invested capital. The FCF ROIC is the yearly return that one could generate from the business if you owned 100% of the company under the current capital structure. I also like to calculate the FCF ROIC "net" value, which nets out the cash held on the balance sheet from both equity and debt. Once again I want to see FCF ROIC values above 10%.

Union Pacific hasn't consistently been above the 10% threshold for FCF ROIC with only 3 years being above that mark. That shouldn't come as much of a surprise given that the railroad industry requires constant capital investment to avoid their network deteriorating. The silver lining is that the trend for FCF ROIC is towards higher levels and I'll be looking to see if Union Pacific can consistently be above the 10% level.

To understand how Union Pacific uses its free cash flow, I like to examine 3 variations on the metric, defined below:

Ideal investment candidates will show positive FCFaDB since that would mean the business generates a surplus of cash through its operations to maintain and grow the business as well as reward shareholders with dividends and share repurchases. A negative FCFaDB in any given year isn't much of a concern; however, a routinely negative FCFaDB will mean that management will be drawing down the cash on its balance sheet or seek external funding via the debt markets. 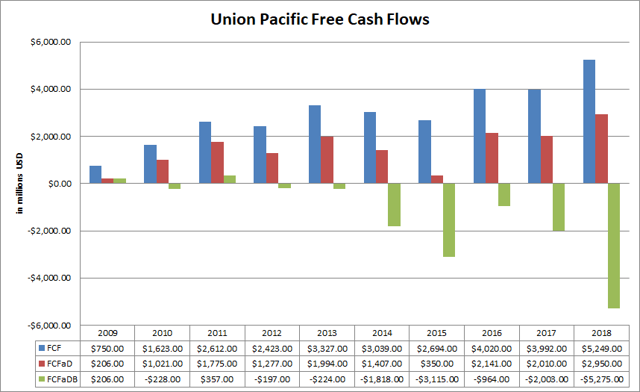 That FCF has allowed Union Pacific to pay out a total of $14.60 B in dividends to owners over the last decade. That puts the FCFaD over the entire period at $15.13 B and has allowed management to grow the dividend payment as well as use share repurchases as another means to return capital to shareholders.

The share repurchases have been quite effective with that $28.39 B reducing the share count by 25.5% or a 3.2% annual reduction. 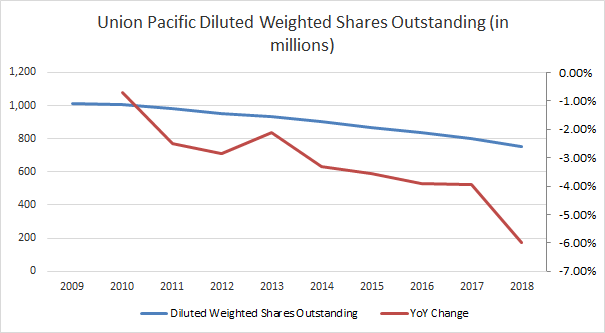 The following chart shows the ratio of the cash Union Pacific has used on dividends and share repurchases. While I concede that share repurchases are more tax-efficient, my preference is to see dividends as the primary capital return method since many managements do a poor job of buying $1 of earnings power for a discount.

As you can see in the above chart, share repurchases have been the preferred means of returning cash to shareholders by Union Pacific with approximately 30/70 and 40/60 splits over the last decade.

Despite the debt-funded share repurchases, the balance sheet hasn't been hurt too badly. The total debt to capitalization ratio has increased from ~30% debt up to greater than 50%. Overall though the balance sheet is still solid. 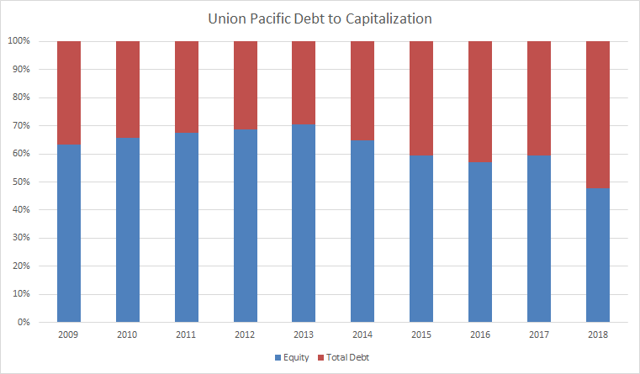 At the end of 2018, Union Pacific's entire debt load could be repaid with 4.3 years of 2018's free cash flow. Union Pacific also had 6.0x free cash flow interest coverage. While the debt has increased significantly for what appears to be the repurchase of shares, the debt is currently manageable. I would still prefer to see the debt reduced or at least not increased going forward.

Risks To An Investment In Union Pacific

As one of the largest shippers of goods in the United States, Union Pacific is going to be tied to the strength of the economy. That means when recession strikes Union Pacific will see a decline in rail shipment. However, this is likely to be a short-term issue that Union Pacific will be able to weather just fine due to the location of its rail networks and the hard to penetrate moat.

Another drawback to Union Pacific is that the business requires constant capital investment just to maintain the business as is, let alone improve the business. The increasing capital expenses will be a drag on future cash return opportunities barring continued improvement in Union Pacific's operational efficiency. Of course, the capital heavy nature of running a railroad is also a positive for the business as it keeps competitors at bay.

While I like all excess capital to be returned to me as an owner, I don't want to see debt being used to finance that unless the shares are drastically undervalued. As I mentioned earlier, Union Pacific has spent >$13 B more than cash that was generated by the business over the last decade. Management recently authorized a new share repurchase plan to buy back 150 M shares by March 31, 2022, or approximately $25 B near the current prices. That's all well and good if Union Pacific can do so with internally generated funds. However, based on 2018's results with $2.95 B of FCFaD, it's just not realistic for this to be internally funded. That means excess capital, i.e. debt, will be taken on diluting owners' stake in the business.

On average, analysts expect Union Pacific to earn $9.08 for 2019, $10.28 for 2020 and to grow earnings at 16.6% per year on average over the next 5 years in total. I then assumed that the following 5 years would see earnings growth slow to 6% per year. For this analysis, dividends are being targeted at 40% of annual earnings per share which is in line with the low end of management's guidance. 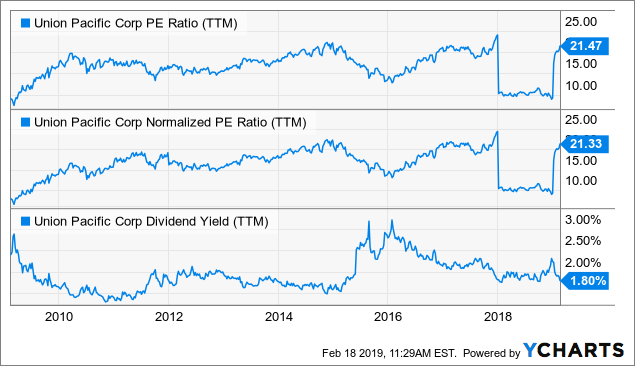 The following table shows the potential internal rates of return that an investment in Union Pacific could provide assuming a purchase price around $169 per share. Returns include estimated dividend payments and are run through the end of calendar year 2023, "5 Year," and calendar year 2028, "10 Year."

Alternatively, I want to determine price targets that would potentially generate 10% and 15% internal rates of return based on the varying future P/E ratios. The same assumptions from above apply to the following calculations.

Union Pacific is a wonderful company with a very strong regulatory moat built on the right-of-way that it has for its rail network. The strong moat has allowed Union Pacific to drastically improve its cash flow coming out of the "Great Recession."

With the current price near $169, the shares appear to be in range of fair value. Returns should be solid under the assumption that growth plays out as forecast in this analysis with a high likelihood of 10%+ returns. Currently, the P/E ratio based on 2019's estimates is at ~18.6x which based on historic multiples is a fair price to pay.