Our man Jay Powell is talking a little more about raising rates. END_OF_DOCUMENT_TOKEN_TO_BE_REPLACED

Cheap stocks continue to be the land of opportunity for aggressive investors.We END_OF_DOCUMENT_TOKEN_TO_BE_REPLACED

It was to usher in nothing less than a new era for Wall Street. UFAANG.

That ungainly acronym, envisioned by some at Morgan Stanley as the hype grew over Uber Technologies Inc., put the ride-hailing company in the same league as the titans of tech: Facebook, Amazon, Apple, Netflix and Google.

But by Friday’s closing bell, the most talked-about start-up of the decade and the biggest initial public offering of the year suddenly qualified for a different club -- of losers.

Done in by a broad stock market selloff and a weak earnings report postedby its primary rival, Uber plunged immediately at the opening of trading, falling as much as 8.8% from its IPO price of $45 per share, a level that was already at the low end of bankers’ expectations. The stock closed at $41.57, and Uber joined a small group of major IPOs that ended their first day down.

Day One doesn’t necessarily determine the fate of a stock, of course. But Uber’s rough opening startled investors counting on a more jubilant debut from Silicon Valley’s quintessential unicorn. Many venture capitalists who had piled into the company were saddled with losses as the market capitalization shrank to $69.7 billion.

It all cast a pall on 2019’s prospects as the hottest year for tech listings this decade -- and potentially on the future of the ride-hailing industry. Lyft Inc.followed its bigger competitor to end Friday down 7.5%, almost $21 below where it sold the stock just six weeks ago.

A Morgan Stanley memorandum to a group of wealth managers touted Uber’s “massive, leading global platform” and other attributes and predicted the acronym for the best-performing tech stocks would gain a U, according to documents obtained by Bloomberg. (The documents used an old version, FANG, without the A for iPhone maker Apple.) A spokesman for Morgan Stanley’s wealth arm declined to comment.

The bank led the listing with Goldman Sachs Group Inc. and Bank of America Corp. 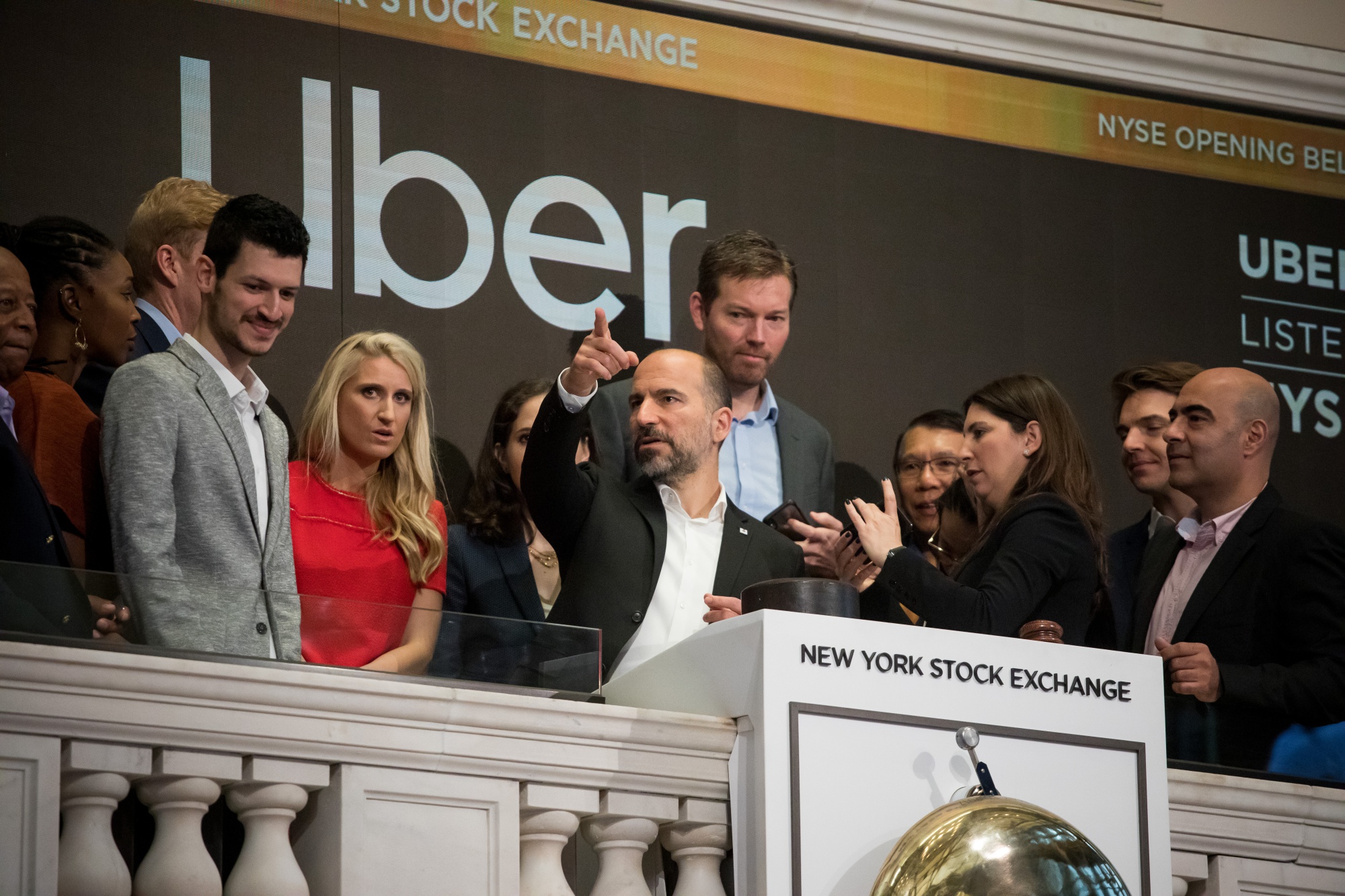 Uber could certainly still join the celebrated group of popular tech stocks, even with a tough ride out of the gate. Dara Khosrowshahi, Uber’s chief executive officer, said in an interview on the floor of the New York Stock Exchange that trade tensions between the U.S. and China played a role in the weak performance. President Donald Trump had moved overnight to slap fresh tariffs on Chinese goods.

“You can’t pick when you go public,” Khosrowshahi said.

Still, Uber shares extended losses into the close, even as U.S. equities stabilized on renewed optimism that an all-out trade war can be averted.

It took more than two hours for the stock to start trading after Uber executives and drivers congregated at the exchange for the bell-ringing ceremony. The shares debuted at $42, well below the IPO price. A tense wait for those on the trading floor turned into a jittery start for the newly public company, which touched its intraday high and low prices within 35 minutes of opening.

Uber’s inauguration was no doubt closely watched by the cavalcade of IPO hopefuls lining up to list in 2019. That crop includes Peloton Interactive Inc., Postmates Inc., Slack Technologies Inc. and WeWork Cos., all of which have preparations in progress to go public this year.

Along with Uber, they would be following companies including Lyft Inc., Pinterest Inc. and Beyond Meat Inc. to market.

Beyond Meat ended the week 165% over its IPO price with a valuation of $4 billion. Pinterest extended gains to close 53% above its listing price of $19 a share. Lyft, meanwhile, followed its bigger rival down Friday, almost $21 below where it sold the stock just six weeks ago.

Len Sherman, a professor at Columbia Business School, said that while too much attention is paid to trading on Day One, Uber provided enough financial information in the run-up to the IPO for investors to know what they’re buying into.

“The market has reacted negatively to a shared reality that both Lyft and Uber are struggling with a fundamentally broken business model,” he said. “Uber has lost more money faster than any startup in history, with no clear path to profitability.”

Uber’s losses last year totaled $3.04 billion on an operating basis, with revenue of $11.3 billion. Its total operating losses over the past three years were more than $10 billion, according to filings.

Khosrowshahi said in the interview that while profitability was a priority for the company, public market investors should be judging Uber by a different measure once it starts reporting quarterly earnings. “The most important sort of statistic to look at is bookings, because that reflects essentially what people are paying for the service,” he said.

In distributing the stock, Uber prioritized shareholders -- particularly institutional investors -- that it thinks will hold on to shares for a long time. “We found a set of investors who are long-term oriented, that believe in our vision,” Khosrowshahi said. “Now we have to execute to make sure that the bet that they made on us is a great bet.”

Uber sold 180 million shares for $45 each Thursday, after marketing them for $44 to $50 apiece. Even at the low end of the price range, Uber’s listing was the ninth-largest U.S. IPO of all time and the biggest on a U.S. exchange since Alibaba Group Holding Ltd.’s $25 billion global record holder in 2014, according to data compiled by Bloomberg.

A market value of less than $70 billion is a considerable climb down from earlier projections: Last year, bankers jockeying to lead the offering told Uber it could be valued at as much as $120 billion in an IPO. The San Francisco-based company last raised private capital from Toyota Motor Corp. in August at a valuation of about $76 billion.