Our man Jay Powell is talking a little more about raising rates. END_OF_DOCUMENT_TOKEN_TO_BE_REPLACED

Cheap stocks continue to be the land of opportunity for aggressive investors.We END_OF_DOCUMENT_TOKEN_TO_BE_REPLACED

Uber’s underwriters, led by Morgan Stanley, were so worried the company’s initial public offering had run into trouble, they deployed a nuclear option ahead of the deal last week, so they could provide extra support for the stock, four people with knowledge of the move said.

This level of support, known as a “naked short,” is a technique that goes above and beyond the traditional help a new offering can get.

In every deal, there’s an overallotment, which allows the underwriters to sell 115% of the available offering to investors, effectively opening a short position. The excess 15% can be purchased by the underwriters in the open market — covering the short position — to support the stock if it goes down. More colloquially, this is known as the “greenshoe.”

But in rare cases, bankers will use a strategy called a “naked short,” which allows underwriters to sell shares in excess of that greenshoe portion and then buy them back in the open market to provide even more firepower in the event there is significant selling pressure.

Some of the bankers tried to console market participants prior to the opening of trading by telling them that there would be additional support from the naked short, said one of the people, who asked not to be named discussing private conversations. The exact size of the naked short could not be learned, but it is expected to have been “fairly small,” two of the other people said.

The efforts didn’t stop Uber from falling 18% in its first two days of trading as heavy trading volume ate away at the banks’ ability to support the stock price. Shares of Uber were higher by 2% as of midday on Tuesday.

The requirements of the naked short are that the underwriters must close out their position by purchasing shares in the open market. The mechanism is quite uncommon, used in a small fraction of deals, given that it can be risky for the banks if the stock price does indeed go up and they are short. It’s also typically reserved for larger deals because the banks need enough liquidity to take on the extra risk. 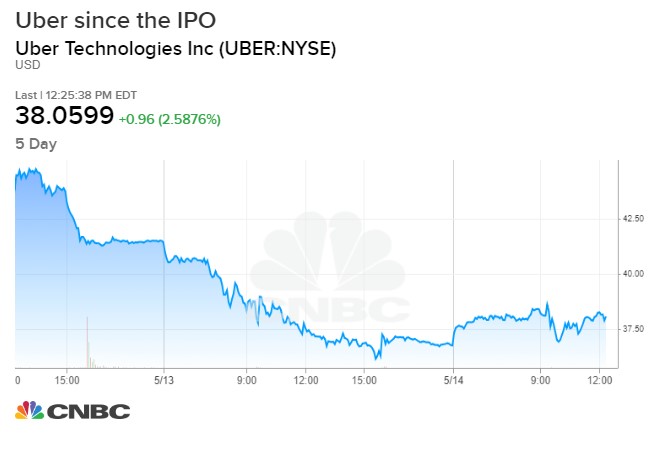 But there can be additional profit for the underwriters as well. If the stock goes down, the banks can generate millions of dollars in additional funds to put toward their fee pool by covering their short. That said, just because an underwriting syndicate has created a naked short doesn’t mean that they’re betting directionally on their clients to fail. In a normal short sale, an investor will sell shares they borrowed from an investment bank, in hopes the stock will fall and they can buy them back cheaper, profiting from the difference when they return the stock to the bank.

The naked short technique shares the same name as a practice that was outlawed during the financial crisis of 2008, as defined by shorting stock that does not actually exist. Typically, when a trader seeks to put on a short position, he or she must ensure that the stock physically can be borrowed before placing a negative bet on it. Before the crisis, investors were shorting shares in excess of the available float, which added undue pressure on certain companies’ stock prices.

However, naked short selling as part of a syndicate in an IPO is still legal, according to Securities and Exchange Commission rules, and was disclosed in Uber’s prospectus as a possibility.

“A naked short position is more likely to be created if the underwriters are concerned that there may be downward pressure on the price of the common stock in the open market after pricing that could adversely affect investors who purchase in this offering,” Uber said in the filing.

Uber’s bankers netted at least $100 million in fees from underwriting the deal, based on the 1.3% fee charged for managing the offering. It’s unclear at this time how much they were able to generate from the naked short.