Remember Uber Technologies' ( UBER) third quarter earnings that posted revenue growth of 32.7%, while still leaving unadjusted earnings per share decisively in negative territory? You'll also recall that the firm's net loss for the period ballooned to a decline of $1.162 billion -- despite that growth. To address the glaring lack of profitability that had become a concern of focus for Wall Street, the firm had made a number of decisions regarding primarily where and when it will compete. Not a bad strategy at all.

Now the news that broke on Tuesday morning that Uber had sold its Uber Eats business in India to the Alibaba ( BABA) -backed Zamato. Details are scant, however, it has been reported that the firm will be on the receiving end of $172 million, and still be left with a 9.99% stake in the business as restaurants in the region will be directed through Uber Eats to use Zamato. Flashback to Nov. 4. that was when the firm made plain the intent to potentially exit markets where becoming a "top two" player might be unlikely. Uber had already discontinued food delivery in South Korea last September.

The Wall Street Journal ran a piece on Tuesday discussing steps taken by the firm in several California markets in response to that state's passage of Assembly Bill 5. As segments of the U.S. economy have evolved (devolved?) into what is referred to as the "gig economy," that law requires firms to treat contracted laborers as employees in terms of providing a number of benefits such as sick days. This plan by Uber, which has not yet been adopted by chief rival Lyft Inc. ( LYFT) , will allow drivers to charge their own rates in those markets in increments of 10%, up to 500%, of Uber's price for the ride. The app will then match to consumer to the cheapest fare for the requested ride, forcing competition on the supply side of those routes among drivers.

Potentially, by giving drivers more influence over their businesses, this may reinforce the idea of the driver being a contracted laborer and not an employee, as they will conduct that business with a greater degree of autonomy.

So, why are the shares trading higher on Tuesday morning? The sale of the business in India is part of it. The idea that Uber may reduce food delivery on a grander scale globally would seem to be a positive. The idea, also that he firm may be finessing its way around California legislation might be part of it.

That news on Tuesday morning, however, that UBER had been named Morgan Stanley's top U.S. internet pick for 2020, and the firm's $55 target price most likely has had the most impact. Morgan's thesis centers on the concept of improving metrics for profitability in the growing field of ride-sharing as an industry.

Tack this on to news last week that Goldman Sachs ( GS) had exited the name during the fourth quarter that was followed by positive commentary made by Justin Post at Merrill Lynch, Justin Patterson at Raymond James, Jake Fuller at Guggenheim, and Scott Devitt at Stifel, Nicolaus and Co. All four of those analysts are rated at four stars or better by TipRanks. All four rate the stock as a "buy" or their firm's equivalent.

Uber is expected to report fourth quarter results on Feb. 6. Consensus Wall Street opinion is for a per share earnings loss of 68 cents on revenue of $4.06 billion. I don't know how much the Street will focus on the EPS number, but a revenue number like that would be good for growth of 36.5%. That would go a long way. 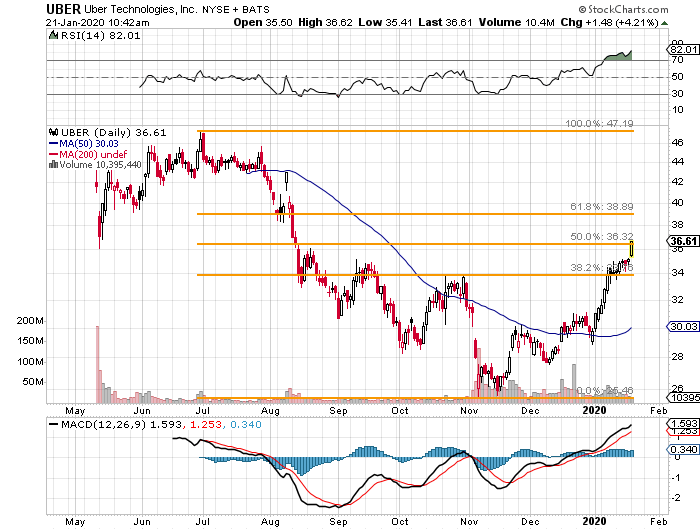 The first thing that I see is that these shares have now retraced 50% of the July through November sell-off. Can the shares get reach out for the next Fibonacci level close to $39? I think so. Given the commentary around the name, maybe a better-looking quarter is on tap. Both the daily MACD, and Relative Strength appear extended. In this market, that hardly makes UBER unique.

Note: Novice level: The investor lays out a net $75 to try to win back $200 in less than three weeks.

Note: A little riskier, with potential for greater reward. The trader lays out a net $285 to try to win back $1,000 at June expiration.