It’s all or nothing in the U.S. stock market.

The S&P 500’s top constituents have shown a greater tendency to move in the same direction over the past month than at any time since the aftermath of the Brexit referendum in 2016. So-called realized correlations have soared, sending stocks up or down en masse under a barrage of trade headlines.

The whipsaw effect has been even more pronounced since Aug. 5, when China’s yuan broke 7 relative to the dollar. During that period, the absolute value of the S&P 500’s advance-decline line has exceeded 350 on 11 instances. Those were the most lopsided readings since 2011’s fourth quarter, when Europe’s sovereign debt crisis weighed on global risk appetite. 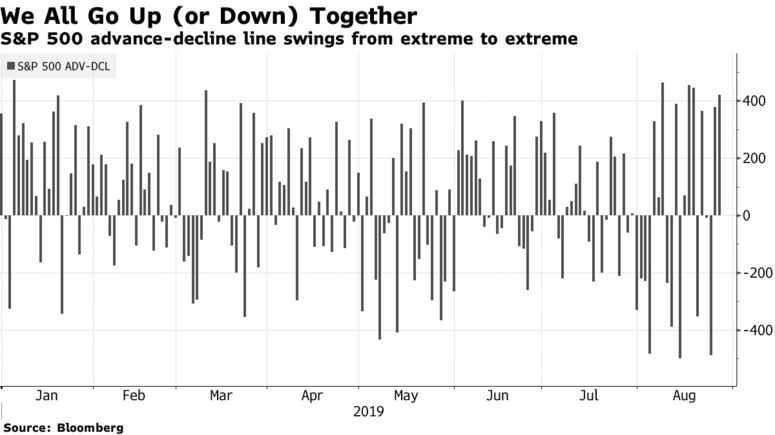 “The macro environment is being influenced so much by swings in sentiment around trade,” said Dennis DeBusschere, head of portfolio strategy at Evercore ISI, in a phone interview. Extreme readings of the S&P 500’s advance-decline line on trade pronouncements are likely to continue “unless people become numb to trade over time, which is probably not going to happen,” he added.

However, traders seem to be thinking that this macro market fever may break. Implied correlations -- a measure of how much traders expect stocks to sing the same tune over the next month -- have ebbed even as realized correlations push ever higher. Typically, implied correlations trade at a premium to their realized counterparts. Two episodes in 2019 when this hasn’t been the case: January, as damage from December’s market rout was still in the rear-view mirror, and early April, when implied volatilities were pricing the onset of earnings season, a period in which stocks tend to dance to the beat of their own drummers.

This gap helps explain why the Cboe Volatility Index -- known as the VIX or Wall Street’s fear gauge -- is trading below what would be expected given the elevated levels of realized correlations. 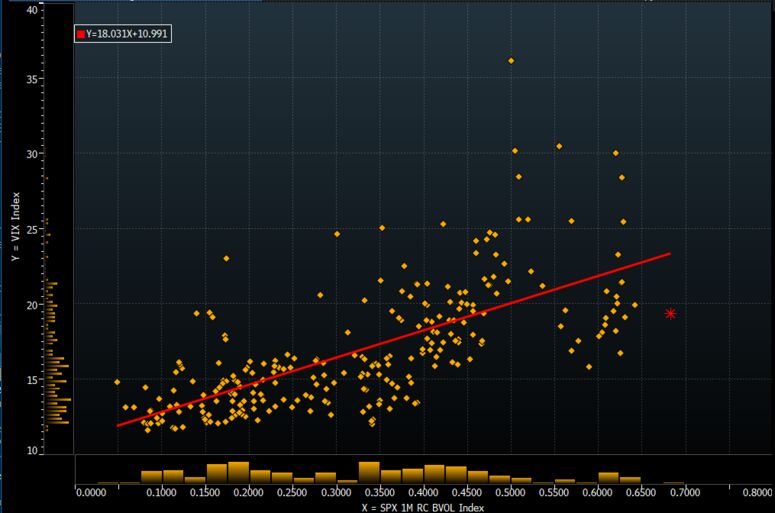 The persistence of implied correlations trading below realized suggests that traders are betting the worst has passed for U.S. stocks, with this choir of a stock market poised to break up into solo acts.

It may be a bit too early for those types of wagers, according to Maxwell Grinacoff, derivatives and quantitative strategist at Macro Risk Advisors.

Typically, it takes realized correlation about a month to subside following a major spike, he writes, and an environment of higher correlations argues for buying index and ETF options to express views rather than single-name exposure. 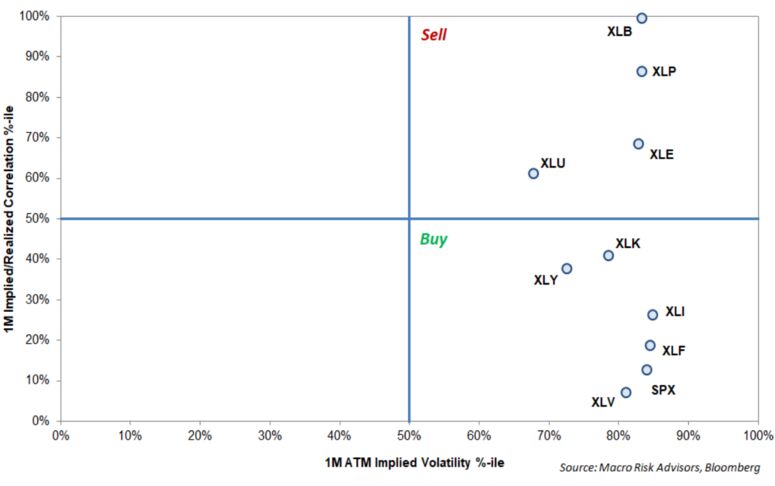 “We would look to own short-term optionality to benefit from an elevated level of realized correlation in the near-term, particularly at cheaper levels of implied volatility,” the strategist said, highlighting consumer discretionary, health care, financials, industrials and technology, along with the S&P 500 at large, as attractive places to own volatility.