Some argue this is a news-driven stock market. While news affects market movements, it’s not as if stock investing is random and unpredictable.

In reality, there are patterns that:

Here is one such pattern:

I’ve been writing about an expanding triangle (or megaphone) ever since I first published the purple projection in the June 2 Profit Radar Report.

The “before and after” picture below shows the original S&P 500 pattern projection (purple lines) and actual performance:

The market action of recent weeks proves that purple trend-line resistance is valid. The next step is finding out whether the pattern, which implies a drop toward 2,300 points, is also valid.

No market goes straight down. There are always bounces along the way, and I argued in last Monday’s (Aug. 5) Profit Radar Report that a bounce is brewing. Why?

A total of 90% of all NYSE-traded stocks declined that Monday. As the blue lines in the chart below show, such heavy selling usually leads to bounces.

In addition, stocks were oversold, and S&P 500 futures bounced from Fibonacci support at 2,793. 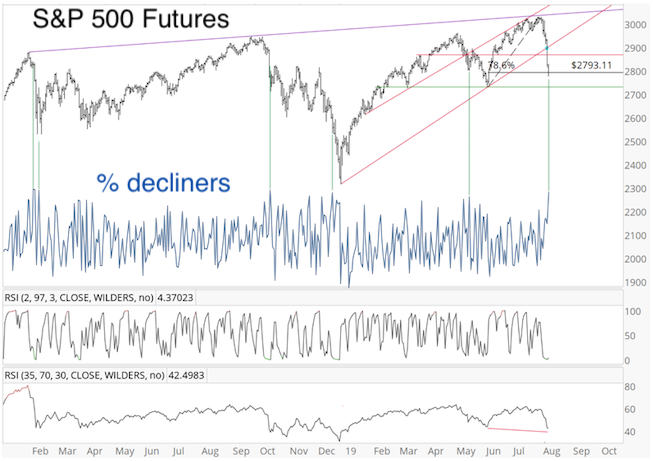 The bounce from last Monday’s low is not unusual, and — as the green lines show — four of the past five bounces after 90% down days eventually relapsed.

Until recently, stocks used to take “the stairs up and the elevator down.” In other words, rallies developed slower than declines. This changed in 2019, when stocks took the elevator up.

Could it be that the S&P 500, Dow Jones Industrial Average and Nasdaq will continue to rise and eclipse their previous highs?

Yes, it’s possible. Acknowledging the possibility (even taking it seriously) shouldn’t be confused with being vague; it’s simply a part of risk management.