Spectators are finally getting their first chance to buy a dip in NIO (NASDAQ:NIO) shares since they exploded. After working on the third bar of its retreat on Wednesday, with bulls putting up a fight, NIO stock was down a whopping 13% in premarket trading as of 5:30 a.m. EDT.

After taking a fresh look at its red-hot chart, today’s article will provide trade ideas on NIO stock for both equity and options traders.

Year of the EV Stock

To be sure, 2020 will go down in history as the year of the electric vehicle stock. Tesla (NASDAQ:TSLA) has rallied as much as 329% so far and is the most popular and widely followed ticker in the industry. But its meteoric gains have been matched and exceeded by lesser-known newcomers.

Shanghai-based Nio was up 309% on the year at last week’s peak. And then there’s the insanity of Nikola (NASDAQ:NKLA), which rose as much as 811% before sellers finally struck. It doesn’t hurt that the stimulus-driven rally in the broader market off the March low has bulls running wild. Still, the magnitude of the ascents in NIO stock and friends has been astounding. 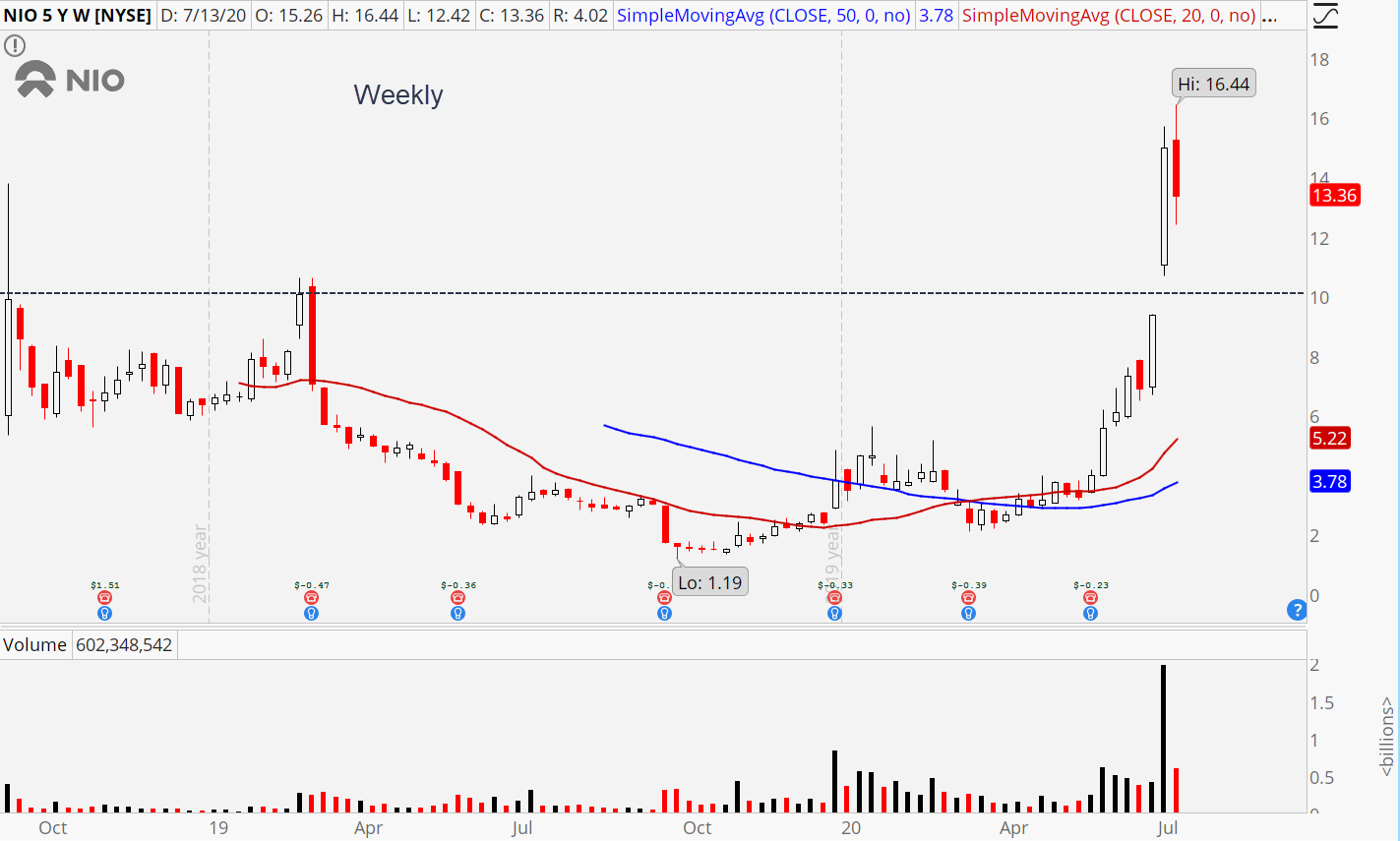 The importance of last week’s breakout can’t be overstated. It allowed NIO to finally clear its post-IPO base and put all resistance levels behind it. From a technical perspective, there’s perhaps nothing more powerful than a stock finally emerging from the trading range carved out in the months following its public debut. For NIO, it took over a year-and-half, but better late than never.

Pushing back into the range would sour my outlook, so $10 is a crucial level to watch moving forward. If the principle of polarity holds, this old resistance zone should become new support. The fact that $10 was a significant ceiling makes it all the more likely that buyers swarm to its defense on subsequent retests.

Patterns in the volume indicator are also bolstering the bullish view. High volume has accompanied the rally virtually every step of the way. The groundswell confirms big buyers are pushing in. Their participation makes the nascent uptrend more robust and sustainable. It also increases the likelihood that dips — like the current one — get bought.

Drilling down to the daily shows just how parabolic this month’s rise has been. Even though we’ve dropped for three bars, the 20-day moving average is still a mile away. A deeper retracement would create a better risk-reward setup, but if bulls remain aggressive, we may not see much more weakness. Either way, as mentioned above, I think you have to view this as a buying opportunity. 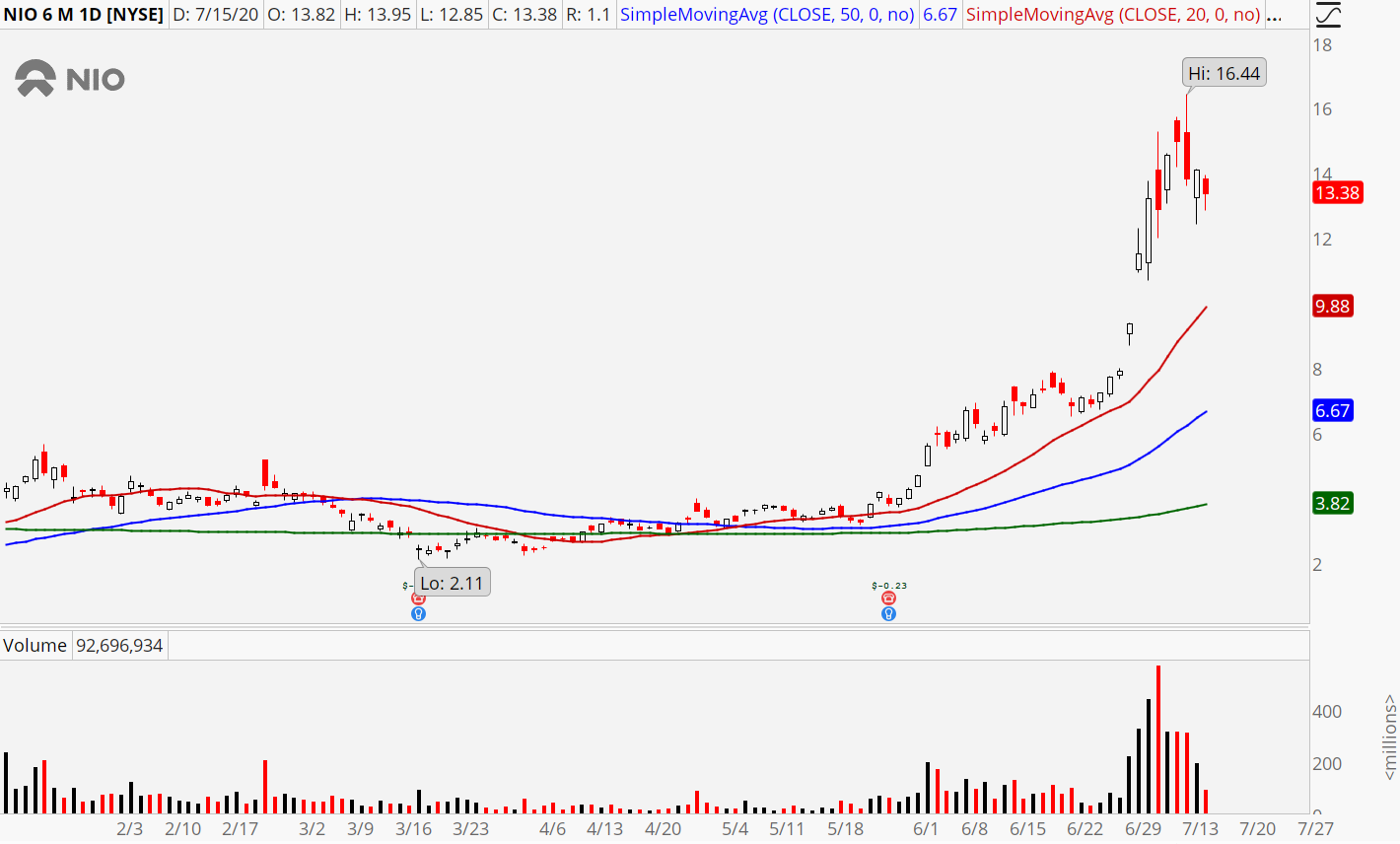 Let’s look at two trade ideas, one for stock and one for options.

Even though Wednesday saw NIO stock printing an inside bar, the candle high is still lower than Tuesday’s. To decrease the odds of buying before the dip is done, I suggest waiting for a break of the previous day’s high before pulling the trigger. That puts the line in the sand at $13.95 for now. If Thursday prints a lower candle, then use its high to trigger in on Friday.

If you want to increase your probability of profit, you could opt for selling puts instead of playing stock. Because of the sky-high implied volatility, premiums are pricey. Instead of buying shares now, you can get paid to acquire them lower by selling puts. Since $10 should provide some support, consider selling the Aug $10 puts for around $1.15.