This Is The Safest 9.7% Dividend You Can Buy

At my Contrarian Income Report service, we hunt down huge dividends on the regular. Right now, our portfolio is knocking out a 6.9% average payout from 16 real estate investment trusts (REITs), stocks and closed-end funds (CEFs).

We’ve grabbed serious price gains, too: since launch in 2015, CIR has delivered a 12.5% annualized return. Not bad for a set of “boring” income plays!

Even though our CIR club is “high yields only,” I get that many folks look to stocks with low (or no) dividends for gains, too: names like Apple (AAPL), whose 1% yield won’t get it within a mile of Contrarian Income Report.

If you’ve profited from this run, or the big gains of any of the FAANG stocks—Facebook (FB), Amazon.com (AMZN), Apple and Google (GOOGL), a.k.a. Alphabet—congrats!

Time to Take Some China Profits …

But after a run like that, it’s smart to take some profits, especially after last week’s warning that the coronavirus will hit Apple’s suppliers—and sales—in China this quarter.

That’s a considerable worry, with China providing about 15% of Apple’s sales last quarter. Other firms with lots of China exposure could be the next to get hit, like Nike (NKE), or restaurant operators McDonald’s (MCD), Starbucks (SBUX) and Yum China Holdings (YUMC), all of which have had to shut Chinese locations due to the outbreak.

… And Reinvest Them in US REITs

I’m not saying now is the time to dump everything China-related. But now is a good time to shift some cash into domestic REITs with dividends that crush Apple’s payout, and deliver fast payout growth, too.

Their US focus helps protect you from viruses and trade wars. Plus, REITs can (and regularly do) move independently of the stock market, helping hedge your downside. You can see REITs’ resilience in action in the late-2018 market crash. Sure, they fell along with stocks, but only about half as far.

And even though they didn’t fall to the same depths, REITs still bounced back hard and were outrunning stocks just a month after the markets bottomed.

Many REITs did much better. Three of the biggest names in the space—mall landlord Realty Income (O), in red below, cell-tower REIT American Tower (AMT), in orange, and senior-care specialist Welltower (WELL), in green—made money in the crash!

Now let’s dive into three other top-notch US REITs with soaring payouts. It’s true that none of them hit our CIR standard of 7% current yields. But that’s no problem, because all three are growing their dividends fast—buy them today and you’ll be yielding that 7% (and more) on your original buy in short order.

And if you can’t wait, don’t worry: I’ll wrap up with a REIT-focused CEF you can buy for 93 cents on the dollar today. It starts handing you its 6.5% dividend—paid monthly—shortly after you buy.

National Retail Properties might not seem like the best shield against international mayhem. After all, it owns retail stores, and don’t retailers need Chinese supply chains to keep the registers ringing? And what about Amazon?

I can knock off both worries with this: 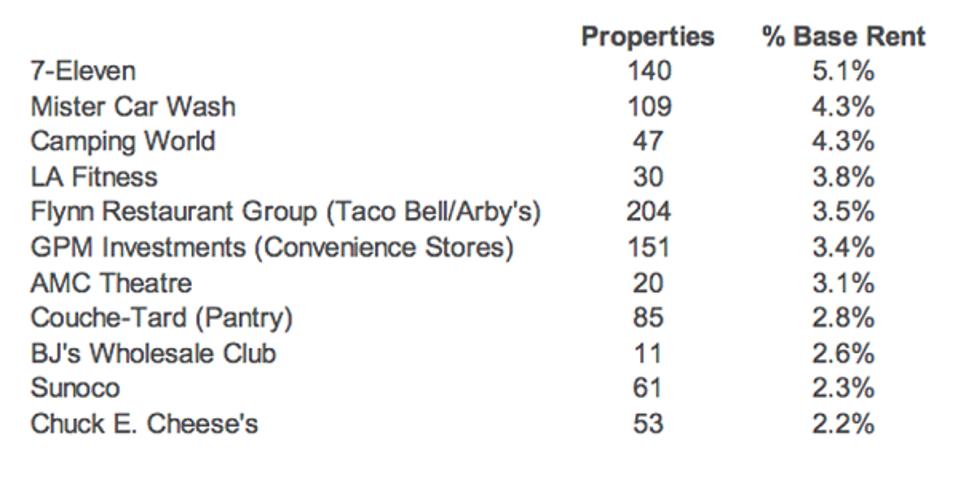 That list is dominated by businesses that are either health- or entertainment-focused (restaurants, gyms and movie theaters) or sell things people need to buy daily, no matter what, such as 7-Eleven and Sunoco.

Three other things that stabilize NNN: long lease terms (from 10 to 20 years, with a weighted average of 11.2 years remaining); nearly full occupancy (99% in the latest quarter); and steady dividend hikes. Check out how NNN’s payout has nicely paced its stock higher in the last decade!

It’s hard to argue with a payout like that! If you’d bought NNN a decade ago, that strong dividend growth would have you yielding 9.7% on your original buy today (because you calculate your yield on cost by dividing the current yearly payout by your purchase price). That’s nearly triple the REIT’s current yield of 3.6%.

Essex is another REIT you want to hold when markets panic. It barely missed a beat in the last crash, inching down just 1.6% (including dividends), from the start of the pullback in September 2018 to its trough on December 24, 2018.

Here’s something few people realize: even though Essex is an apartment REIT, it dials you straight into the tech sector’s US epicenters, because it rents to the brainpower that makes Google, Facebook and Amazon run. Check out where its 245 buildings are located:

Essex: A Stealth Play on US Tech Strength 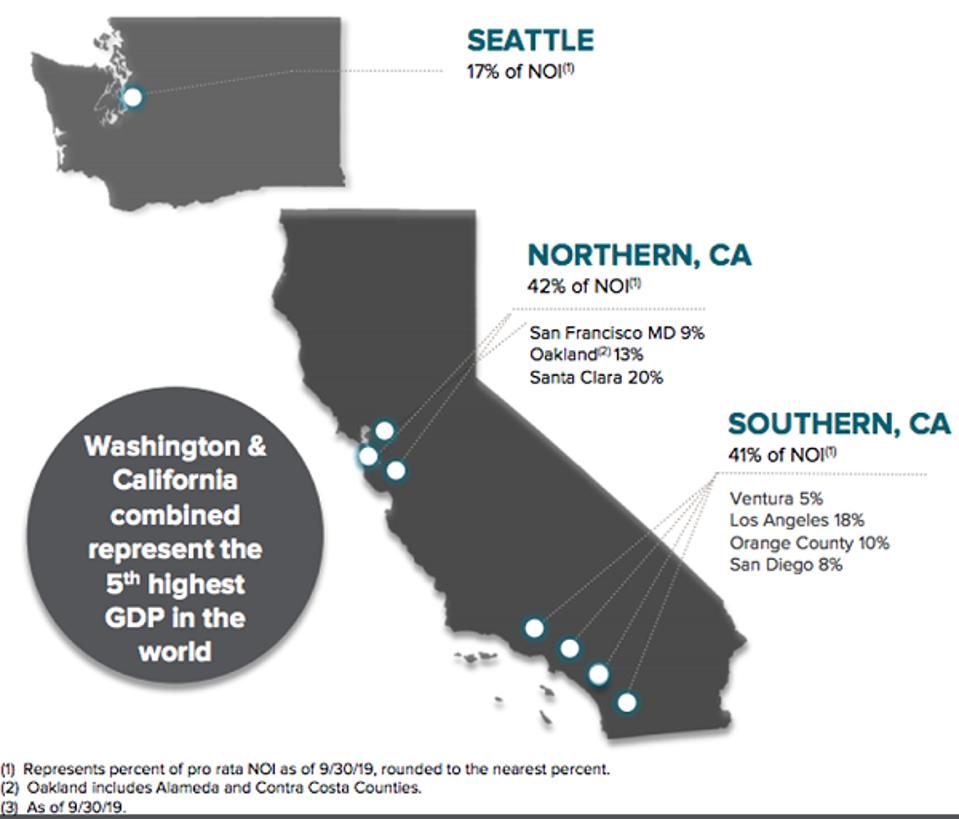 And don’t let Essex’s 2.5% yield deter you. In 2019, it joined the Dividend Aristocrats—a club that’s raised its payouts for at least 25 straight years. These aren’t token hikes, either!

As with NNN, buying in 2010 would have paid off nicely, in the form of a 9.1% yield today. Essex also boasts a safe payout ratio of 57% of core per-share funds from operations (FFO, a better measure of REIT profitability than net income), a 97% occupancy rate and rising per-share FFO (up 8.2% in the fourth quarter).

Thanks to those strengths, I expect today’s Essex buyers to be bagging a yield just as high 10 years from now.

Alexandria is yet another “undercover” tech play. It owns offices and labs in what it calls “innovation clusters,” neighborhoods where companies and government agencies in a particular research area are concentrated.

Once tenants are in these clusters, they tend to stay, as we can see in Alexandria’s sky-high 96.8% occupancy rate.

These clusters also help Alexandria sign tenants to long-term contracts (the REIT has an average weighted remaining lease term of 8.1 years for all tenants, and 11.6 years for its top 20). Alexandria also re-leased and renewed leases at far higher rates in 2019: with average rent hikes of 32% on the year.

Those rising rents come back to investors as a dividend that does something you rarely see: it gets hiked twice a year, and sometimes more than that.

The next payout hike could be upon us as early as June, going by the REIT’s usual pattern—and there’s more to come: Alexandria, like Essex, pays just 57% of FFO as dividends. That’s peanuts for a REIT, especially one that grew FFO 15% last year.

Here’s something else I love about REITs: when you combine them with another of my favorite high-yield options—CEFs—you get instant diversification, plus a massive payout.

Consider the Cohen & Steers Quality Income Realty Fund (RQI). We’ve written about the fund often, due to its 6.5% dividend (paid monthly) and its discount to net assetvalue (NAV, the value of its REIT holdings), which is 6.8% as I write.

RQI spreads its investments across the US, with just over a third on the west coast.

The fund also gives you some of the REITs we’ve covered today, like American Tower, Welltower and Essex Property Trust, as well as some other pullback-resistant trusts, like cell-tower REIT Crown Castle International (CCI) and self-storage owner ExtraSpace Storage (EXR).