The Nasdaq tumbled 2.6% Monday and was down big early Tuesday, before END_OF_DOCUMENT_TOKEN_TO_BE_REPLACED

Tech wrecks are common. Apple (NASDAQ:AAPL) stock is no exception.We had one END_OF_DOCUMENT_TOKEN_TO_BE_REPLACED

The U.S. Justice System Must Focus On Elite Criminality

This corrupt two-tier justice system is something I’ve been focused on from the very beginning of my writings, and I continue to see it as a civilization-level threat for this country if not aggressively addressed and confronted in the very near future.

The two articles in question focus on different aspects of untouchable elite culture in America.

The first relates to the continued fraud pervasive in America’s largest financial institution, while the second covers a thirty year history of predatory sexual behavior by one of Hollywood’s biggest moguls, Harvey Weinstein. In both cases, countless people have known and reported on repeated abuses perpetrated by both the institution and the man, yet the U.S. justice system and the vast majority of “elite” culture happily help shield them from justice. Predators are predators, and elite predators are far more dangerous to society that your average street crook, so why does our justice situation deal with it in the exact opposite way?

Let’s start with the blockbuster article published in The Nation by the always informative David Dayen. The article is titled, How America’s Biggest Bank Paid Its Fine for the 2008 Mortgage Crisis—With Phony Mortgages!

JPMorgan’s share of the settlement was $5.3 billion, but only $1.1 billion had to be paid in cash; the other $4.2 billion was to come in the form of financial relief for homeowners in danger of losing their homes to foreclosure. The settlement called for JPMorgan to reduce the amounts owed, modify the loan terms, and take other steps to help distressed Americans keep their homes. A separate 2013 settlement against the bank for deceiving mortgage investors included another $4 billion in consumer relief.

A Nation investigation can now reveal how JPMorgan met part of its $8.2 billion settlement burden: by using other people’s money.

Here’s how the alleged scam worked. JPMorgan moved to forgive the mortgages of tens of thousands of homeowners; the feds, in turn, credited these canceled loans against the penalties due under the 2012 and 2013 settlements. But here’s the rub: In many instances, JPMorgan was forgiving loans on properties it no longer owned.

The alleged fraud is described in internal JPMorgan documents, public records, testimony from homeowners and investors burned in the scam, and other evidence presented in a blockbuster lawsuit against JPMorgan, now being heard in US District Court in New York City.

Sounds hard to believe, but it’s true. Not only that, but as we’ve come to expect from the “rule of law” in America, it somehow never applies to that group of people with the greatest ability to financially destroy people and their lives. Bankers. For example, here’s some more from the same piece:

Federal appointees have been complicit in this as well. E-mails show that the Office of Mortgage Settlement Oversight, charged by the government with ensuring the banks’ compliance with the two federal settlements, gave JPMorgan the green light to mass-forgive its loans. This served two purposes for the bank: It could take settlement credit for forgiving the loans, and it could also hide these loans—which JPMorgan had allegedly been handling improperly—from the settlements’ testing regimes.

“No one in Washington seems to understand why Americans think that different rules apply to Wall Street, and why they’re so mad about that,” said former congressman Miller. “This is why.”

Most of the loans that JPMorgan released—and received settlement credit for—were all but worthless. Homeowners had abandoned the homes years earlier, expecting JPMorgan to foreclose, only to have the bank forgive the loan after the fact. That forgiveness transferred responsibility for paying back taxes and making repairs back to the homeowner. It was like a recurring horror story in which “zombie foreclosures” were resurrected from the dead to wreak havoc on people’s financial lives.

Federal officials knew about the problems and did nothing. In July 2014, the City of Milwaukee wrote to Joseph Smith, the federal oversight monitor, alerting him that “thousands of homeowners” were engulfed in legal nightmares because of the confusion that banks had sown about who really owned their mortgages. In a deposition for the lawsuit against JPMorgan Chase, Smith admitted that he did not recall responding to the City of Milwaukee’s letter.

Few would expect Jeff Sessions’s Justice Department to pursue such a case, but what this sorry episode most highlights is the pathetic disciplining of Wall Street during the Obama administration.

JPMorgan’s litany of acknowledged criminal abuses over the past decade reads like a rap sheet, extending well beyond mortgage fraud to encompass practically every part of the bank’s business. But instead of holding JPMorgan’s executives responsible for what looks like a criminal racket, Obama’s Justice Department negotiated weak settlement after weak settlement. Adding insult to injury, JPMorgan then wriggled out of paying its full penalties by using other people’s money.

The larger lessons here command special attention in the Trump era. Negotiating weak settlements that don’t force mega-banks to even pay their fines, much less put executives in prison, turns the concept of accountability into a mirthless farce. Telegraphing to executives that they will emerge unscathed after committing crimes not only invites further crimes; it makes another financial crisis more likely. The widespread belief that the United States has a two-tiered system of justice—that the game is rigged for the rich and the powerful—also enabled the rise of Trump. We cannot expect Americans to trust a system that lets Wall Street fraudsters roam free while millions of hard-working taxpayers get the shaft.

Of course, this is just the latest when it comes to JP Morgan. I highlighted the firm’s rap sheet in last month’s post, Which is Fraudulent – Bitcoin or JP Morgan? 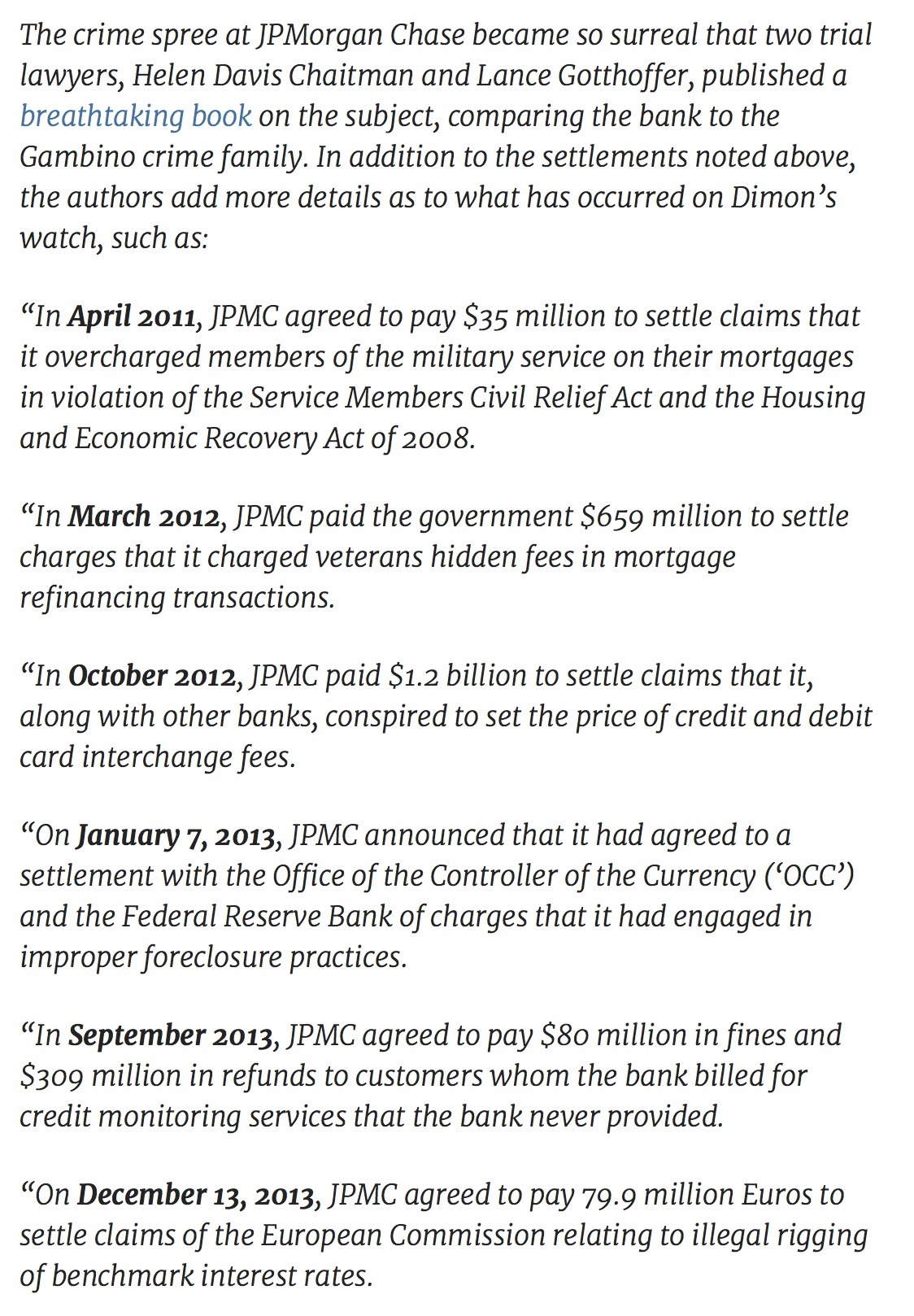 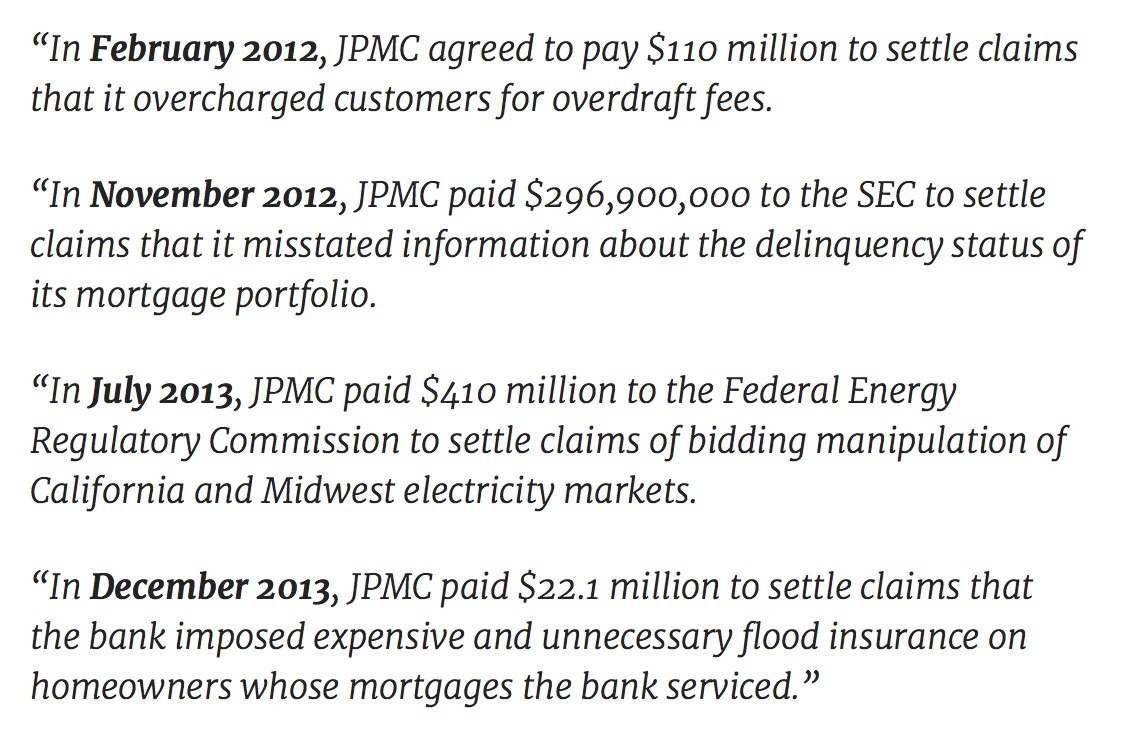 How many JP Morgan executives have gone to jail?

Now onto Harvey Weinstein, a guy whose cretinous behavior has been the biggest non-secret in Hollywood for decades. Just like with banker crooks, he mere settles cases and continues to walk around, freely hunting the next defenseless victim.

The New York Times article published yesterday exposing some of this grotesque man’s history was extraordinary and I suggest everyone read it. Here’s just a little from the piece, Harvey Weinstein Paid Off Sexual Harassment Cases for Years:

Two decades ago, the Hollywood producer Harvey Weinstein invited Ashley Judd to the Peninsula Beverly Hills hotel for what the young actress expected to be a business breakfast meeting. Instead, he had her sent up to his room, where he appeared in a bathrobe and asked if he could give her a massage or she could watch him shower, she recalled in an interview.

“How do I get out of the room as fast as possible without alienating Harvey Weinstein?” Ms. Judd said she remembers thinking.

In 2014, Mr. Weinstein invited Emily Nestor, who had worked just one day as a temporary employee, to the same hotel and made another offer: If she accepted his sexual advances, he would boost her career, according to accounts she provided to colleagues who sent them to Weinstein Company executives. The following year, once again at the Peninsula, a female assistant said Mr. Weinstein badgered her into giving him a massage while he was naked, leaving her “crying and very distraught,” wrote a colleague, Lauren O’Connor, in a searing memo asserting sexual harassment and other misconduct by their boss.

“There is a toxic environment for women at this company,” Ms. O’Connor said in the letter, addressed to several executives at the company run by Mr. Weinstein.

Dozens of Mr. Weinstein’s former and current employees, from assistants to top executives, said they knew of inappropriate conduct while they worked for him. Only a handful said they ever confronted him.

Mr. Weinstein enforced a code of silence; employees of the Weinstein Company have contracts saying they will not criticize it or its leaders in a way that could harm its “business reputation” or “any employee’s personal reputation,” a recent document shows. And most of the women accepting payouts agreed to confidentiality clauses prohibiting them from speaking about the deals or the events that led to them.

In interviews, some of the former employees who said they had troubling experiences with Mr. Weinstein asked a common question: How could allegations repeating the same pattern — young women, a powerful male producer, even some of the same hotels — have accumulated for almost three decades?

“It wasn’t a secret to the inner circle,” said Kathy DeClesis, Bob Weinstein’s assistant in the early 1990s. She supervised a young woman who left the company abruptly after an encounter with Harvey Weinstein and who later received a settlement, according to several former employees.

In March 2015, Mr. Weinstein had invited Ambra Battilana, an Italian model and aspiring actress, to his TriBeCa office on a Friday evening to discuss her career. Within hours, she called the police. Ms. Battilana told them that Mr. Weinstein had grabbed her breasts after asking if they were real and put his hands up her skirt, the police report says.

The claims were taken up by the New York Police Department’s Special Victims Squad and splashed across the pages of tabloids, along with reports that the woman had worked with investigators to secretly record a confession from Mr. Weinstein. The Manhattan district attorney’s office later declined to bring charges.

As disturbing as all that is, it might be the tip of the iceberg. Here’s some additional info from an article published today by The Daily Beast, Hollywood’s Loud Silence on Harvey Weinstein:

The Times piece later identified the 1997 actress as Rose McGowan, who starred in the 1996 film Scream, which was distributed by Weinstein-owned Dimension Films. In October 2016, McGowan tweeted, “Because my ex sold our movie to my rapist for distribution #WhyWomenDontReport.” It’s not known whom McGowan was referring to, though she dated filmmaker Robert Rodriguez from 2006 to 2009, and their film Planet Terror was distributed by Weinstein in 2007.

In the wake of the blockbuster Times exposé, The Daily Beast reached out to dozens of prominent actors, actresses, and filmmakers—who both have andhave not worked with Weinstein—only to receive many replies of “no comment” and plenty of radio silence.

Elite criminals are the most dangerous criminals on earth, but our justice system treats them like well-meaning philosopher kings who deserve endless breaks in the face of rampant unethical and often evil behavior. It should be completely obvious to everyone that the only reason elite crooks get treated with kid gloves is because they’re rich and powerful. The end result of this dereliction of justice is those entrusted with protecting the public have willingly created an entrenched, untouchable, distributed, criminal class which spans across and leads all major industries in America.

As I tweeted earlier today:

The entire force of the U.S. justice system should be focused on elitist crimes, but instead the exact opposite happens.

If we don’t get a grip on this now and begin to marshal our resources against the most dangerous criminals in America — those from the highest echelons of U.S. society — the country will continue to unravel and in an increasingly dangerous and chaotic fashion.

If you liked this article and enjoy my work, consider becoming a monthly Patron, or visit our Support Page to show your appreciation for independent content creators.