The ‘No Sell Portfolio’ Approach To Playing Defense Late Cycle

With the market up 350%+ from the March 2009 lows, investors may be a little queasy about their equity-heavy portfolios. This is only natural and the notion that this is the "most hated bull market in history" echos that queasiness. So far in 2019, with the S&P 500 up 27%+, we have seen investors pull money from stock funds. This is a fairly rare phenomenon in such "good times."

I think it is fair to say that with bond yields near all-time lows and stock prices near all-time highs, investors feel somewhat wedged between a rock and a hard place. They need return and yield to make their plans work but they don't want to see hard-earned capital get washed away by a significant market decline.

Sequence of returns risk plays into this hesitation and queasiness. This is the least considered type of risk, but the most significant one that an older investor faces today. Yes, the most significant. More so than interest rate risk, inflation risk, reinvestment risk, and credit risk.

To illustrate, we use Calvin and Hobbes, two identical investors who retire at slightly different times. They both are aged 65. Both have $1M in investable assets. And both are withdrawing 4% adjusted for inflation. And, coincidentally, they both are able to generate a 6% average return on their investments over the next three decades. 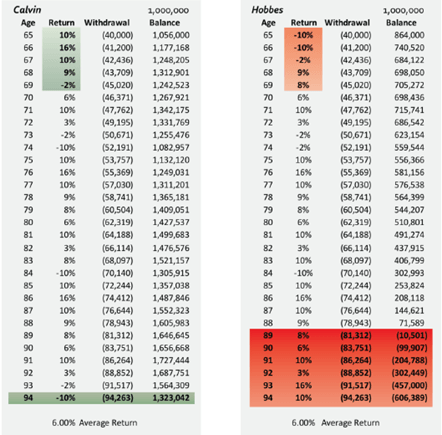 The differences are quite astounding. Calvin ended up with $1.3+M in assets upon their death on their 95th birthday. Hobbes ran out of assets at age 88.

So, it isn't really the average return the person generates but the sequence those returns are generated in when in distribution mode. Hobbes outlives his assets simply because he is selling down. Meaning he is selling assets when it isn't financially prudent to do so. When meeting with your financial advisor, you should be asking if they have a solution to sequence of returns risk so they are not selling down and exposing you to that risk.

Our solution is simple if it can be achieved. Create a No Sell Portfolio! A No Sell Portfolio ("NSP") is one were Hobbes isn't selling shares of anything in a down market to meet his withdrawal request. This substantially reduces the risk of him running out of money during his retirement years.

How Does One Achieve That NSP?

Our Core Income Portfolio produces a yield of ~8% per year taking far less risk than the S&P 500 (though admittedly its more than traditional bond mutual funds). That 8% yield produces regular, recurring income that is very "paycheck like" and could be used for lifestyle spending in retirement.

We generate that 8% yield in a 1.5% yield world using closed-end bond funds ("CEFs"). While there may be a modest amount of NAV decay over time, we are essentially matching our income production from the portfolio to our spending need. If there is excess income from the portfolio, we can then reinvest it to grow that income stream.

The other advantage is that it means the equity piece of your portfolio is there for the ride. It is long-term capital geared towards capital appreciation and purchasing power growth.

If your withdrawal rate (the percentage of your investable assets you need to sustain your lifestyle) is below 6%, then the Core should easily take care of your spending needs.

Why We Use CEFs?

CEFs are one of the last bastions of inefficiency in the markets. They are exchange-traded which gives you daily liquidity but without the "cash flow problem" inherent in open-end mutual funds ("OEFs") or exchange-traded funds ("ETFs"). A CEF will not allow you to double your money overnight. Instead, our goal is to significantly improve upon fixed income returns without adding too much in the way of risk.

CEFs are Geared Towards Income.

Most of the bond funds pay monthly cash distributions which are perfect for paycheck replacement. The additional benefit over the majority of OEFs and ETFs is that CEFs pay consistent cash flows. That allows for the planning of a certain amount of income production on a monthly basis.

Since CEFs trade away from NAV and are less liquid than most ETFs and individual stocks, they can make irrational moves. The discounts sometimes produced look like risk but are in reality an opportunity (more on this below).

CEFs are not an asset class but a "wrapper" that houses an asset class or multiple asset classes. Most investors, even the more sophisticated, don't have the extensive knowledge to build an individual bond portfolio to complement their dividend stock positions. The CEF wrapper allows the do-it-yourself investor to buy 'pools' of bonds while trading and creating capital gains through the purchase at wide discounts.

The largest reason we use CEFs is the CASH FLOW PROBLEM.

The problem stems from the ability of investors to purchase or redeem shares of an OEF at any point before 4:00 PM EST. The portfolio manager of that mutual fund needs to contend with DAILY cash flows into and out of their fund. A former portfolio manager friend of mine who ran a larger high yield bond mutual fund used to say that investors would pull money every day the market was down and add money on up days, without fail. All those inflows and outflows create a performance drag on the fund.

This problem does not exist in a CEF. By definition, the fund is closed meaning no new cash is accepted. This is especially beneficial today as interest rates have plummeted.

New investors into large open-end bond mutual funds (NYSEARCA:OEF) get the ability to piggyback older investors producing some additional yield above current rates. Think about this example: I launch a mutual fund in 2007 with $1M in assets. The assets yield 6.5%, which is about where BBB- rated investment grade debt traded at the time. Three years later, interest rates plummet to near zero and money flows into fixed income. Tons of new capital flows into my fund ballooning the assets to $4M. The new rate of interest is 3.5% - still higher than the current rates at the time but far less than what it was trading before.

The older investors those that made up the original $1M got diluted away and the new money (the additional $3M) was invested at the then, current and much lower rates. The old assets weren't sold or matured, but they became a very small portion of the portfolio.

Again, in a CEF, there is no "cash flow problem", inherent in both ETFs and OEFs. The ability to buy and sell daily in these open structures makes for an extremely inefficient wrapper, especially on the bond side. The ability for the portfolio manager to avoid forced-selling in down markets (due to redemption requests) means that they could take advantage of the higher yields in illiquid bonds and hold them to maturity.

Here's a great example of the difference that the cash flow problem can cause. The turnover ratio for a traditional total bond fund solution is typically in the hundreds of percent. As an example, PIMCO Income Fund (PONAX) has a turnover ratio of 472%. Fidelity Total Bond (FEPIX) has turnover of 170%. That means that Fidelity Total Bond bought and sold 170% of the current assets of the fund over the course of the year.

We can compare that to another bond fund like BlackRock Credit Allocation (BTZ) which has just 30% turnover. Or better yet, PIMCO Dynamic Income (PDI) which reports just 12% turnover. That turnover can be a significant drag on performance. The cash flow problem is one few investors know about.