The Melt-Up In Stocks To Come

All truth passes through three stages. First, it is ridiculed. Second, it is violently opposed. Third, it is accepted as being self-evident. - Arthur Schopenhauer

As I alluded to a couple of weeks ago, I don’t believe this is a correction. By all means, intermarket behavior unequivocally suggests we are in a crash (SPY). The behavior of Treasuries in particular is reminiscent of prior major crashes in the stock market given the ferociousness of the drop in yields (TLT).

I’ve become known over the years as the “tactical” guy given the strategies I run, and the four white papers I co-authored that specifically document leading indicators to risk, volatility, corrections, and crashes. Every week in the Lead-Lag Report, I outline what those very signals are saying to help investors position offensively or defensively before it’s too late. On Jan. 27, short-term indicators turned risk-off, allowing those who followed those leading indicators to completely sidestep this decline.

My interest now though isn’t in the current collapse. My interest is in the melt-up that likely follows afterwards. First and foremost, from a subjective perspective, I find this to be one of the most absurd environments in history. While scary, the Coronavirus seems to be far less dangerous than the reaction to it. The way people are changing their behaviors in an irrational way is the pandemic. At some point, that will change, and all-time historic yields will cause a reflationary move in a major way.

I suspect any potential risk-on signals might flip toward the end of March, even though headlines on the spread may be much worse then. Why do I say that? One of the indicators I track is the relative behavior of utilities. As shown in a 2014 paper I co-authored and track in the Lead-Lag Report, utilities tend to outperform the stock market on a short-term basis before a major volatility spike is likely to happen. The opposite also is true. When utilities begin to underperform (especially in the midst of a broader stock market decline), a bottom is likely close and volatility is likely to drop. I believe the spike we are seeing in utilities outperformance may be a near-term top. 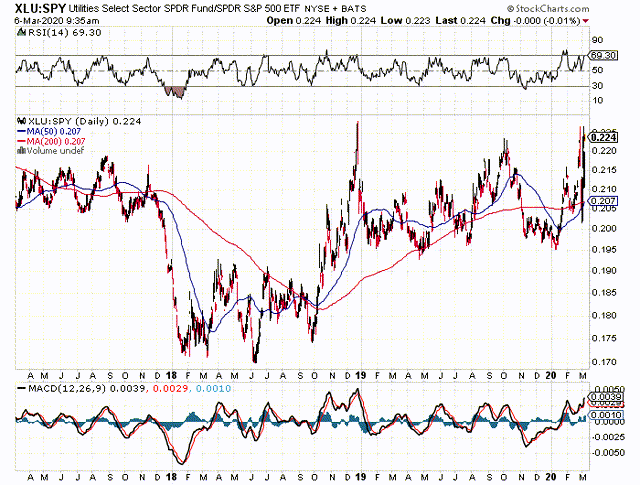 To be clear – the signals are still risk-off across the board here, and maybe we do see the 10-year Treasury yield push to 0%. But when I look at signals objectively (which again, completely sidestepped this collapse), it makes sense to me that we could see a significant melt-up given the speed of the reaction. One of the other encouraging signs to me here is the surprising strength in emerging markets (EEM), and particularly (surprise surprise), China (FXI). Both are outperforming the US on a relative basis despite this having originated overseas. 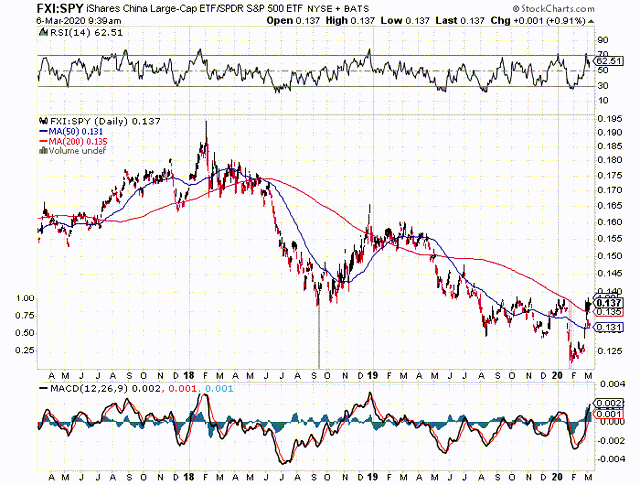 By all means, that chart looks like a real bottom whereby China and emerging markets broadly could be on the verge (finally) or a huge relative move against US markets where all the action has been for nearly a decade.

Strength in emerging markets is bullish on a relative basis, and the extreme movement in defensive signals could be a set up for a contrarian melt-up trade. Finally, given the historic percent of stocks below their respective 50 day moving averages, if you’re not going to consider being more bullish after the decline, if not now, when? 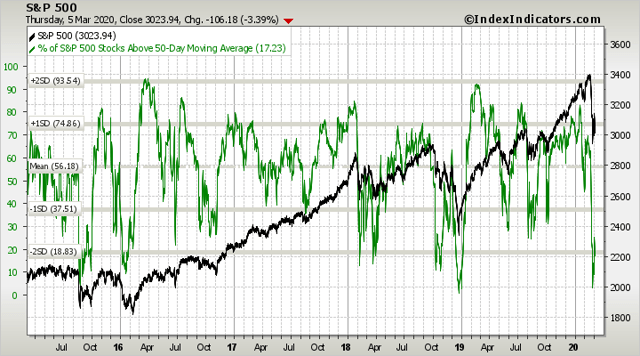