The Hottest Dow Stock This Month May Be Ready To Take A Tumble, Traders Warn

McDonald’s may be setting up for a McBust.

That’s according to Mark Newton, founder and president of Newton Advisors, who says the fast-food giant’s impressive run this year may be coming to an end.

“The stock is showing a relative strength index of right near 80,” Newton told CNBC’s “Trading Nation ” on Tuesday. “Historically, this has happened five times in the last 25 years, and on four of those five occasions, the stock has been sideways to down.” 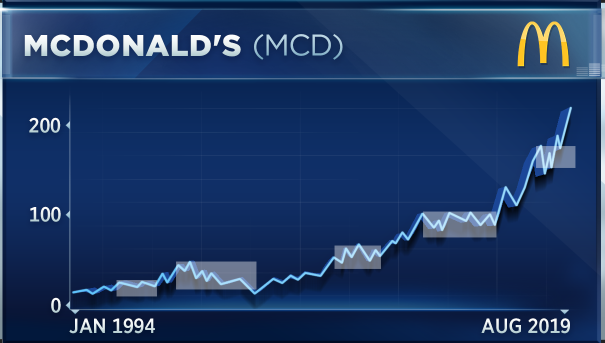 A stock’s relative strength index, or RSI, measures its overbought or oversold conditions. A reading above 70 indicates shares have risen too far, too fast relative to their historical trading patterns. McDonald’s currently trades with a weekly RSI of 79.9.

McDonald’s is the best Dow performer this month, rising 4%. The stock has also climbed 23% this year, outperforming the Dow which is up 11%. MKM Partners jumped on board the stock Tuesday with a buy rating, joining 24 other analysts on the Street with a bullish call. The firm cited a belief that strong domestic and international sales growth is sustainable for the burger chain.

Newton said after that surge the stock is stretched and in need of consolidation.

“It’s had a stellar run, it’s doubled over the last four years, but the past in this case certainly does not equate to a bright future in the next couple years, so I would not put new money to work at current levels.”

Quint Tatro, founder and president of Joule Financial, agrees that it may not be the best time to take a bite out of this burger right now either.

“You now have a company trading eight times sales, negative book value ... traditionally, this is a stock where it does not pay to chase at these levels fundamentally. The dividend is 2%, it’s not all that great, you’re going to get better yielding in some other areas,” he said in the same “Trading Nation” segment.

Tatro said McDonald’s is in a good position, but at risk of a downturn if rates make a reversal.

“It’s not that we don’t like the company, the brand, even in better environments, the fundamentals ... but they’re getting the benefit of a low interest rate environment and if that turns, this stock is going to come down very quickly, I would not be a buyer here.”