Amazon.com Inc. (AMZN) is a leading online retailer and one of the END_OF_DOCUMENT_TOKEN_TO_BE_REPLACED

For most high-growth tech investors, inflation is usually the last thing on END_OF_DOCUMENT_TOKEN_TO_BE_REPLACED

The Economist ran a couple of articles promoting migration as good for the global economy.

Professor Bryan Caplan argued that labour is the world’s most valuable commodity and its value depends on location. If borders were open, a world of free movement would be $78 trillion richer. Mexican labourers can expect to earn 150% more in the West. Unskilled Nigerians make even 1,000% more in Germany than in Africa. The value of an unskilled worker is so much higher in Europe that a Nigerian can make 1000 times as much in Germany, adding 1000 times more to global GDP. Because Western societies are more structured and organised than the Mexican or Nigerian, the unskilled worker can be more productive in a factory in Germany or a farm in the USA than in Africa. A taxi ride in Berlin is much more expensive and thus valued much higher than a taxi ride in Lagos, while the amount of work, driving a car for a while, is the same.

If The Economist expounds Professor Bryan Caplan’s view correctly, then the argument is plain idiotic. The Economist confuses countries with companies that are profit-oriented, and where people are disposable resources. Yet, countries are communities, and citizens do not usually expect their governments to merely maximize GDP. History teaches us that migration causes social unrest, disrupts social cohesion and ultimately the stability of the recipient nation. And even if we set aside these social or national considerations, the Economist’s reasoning is still false.

The whole argument breaks down on social security and the massive world oversupply of unskilled labour. Social security determines the minimum price of labour .

If there is abundance of unskilled workers, governments step in and buy or take out of the market the oversupply of labourers for a minimum price called social welfare. Thus, social security does not differ from setting a minimum price for milk. The consequence of a minimum milk price is that farmers will produce more milk than can be consumed. The surplus is then bought by the authorities and ultimately destroyed, or a milk production quota is imposed.

Moroccans and Turks in the Netherlands are labour migrants.

The Netherlands has no historical relation with either Turkey or Morocco. There is no colonial relationship whatsoever between these two countries and the Netherlands or another shared history.

In the most productive group aged 30-35 more than 30% of the Moroccans and 22% of the Turks receive social security benefit, but only 11% native Dutch. 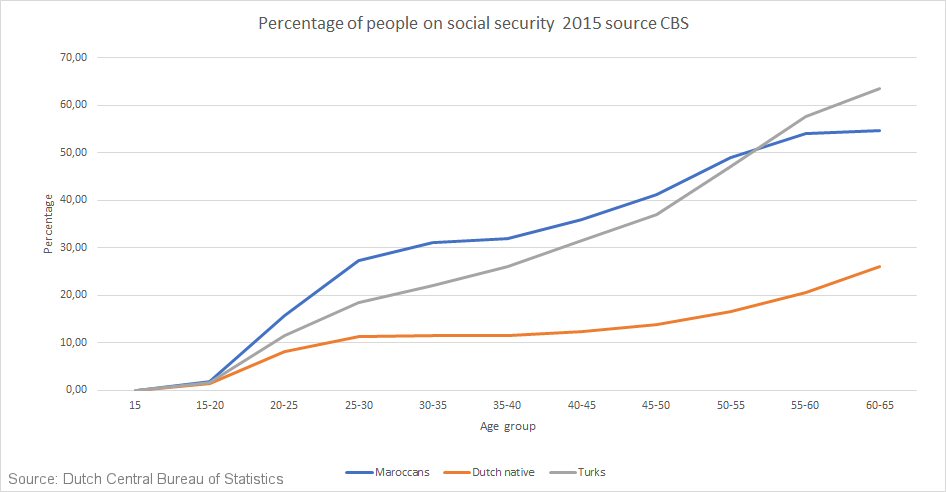 The labour participation for Moroccan men aged 25-35 is a shocking 60%, whereas for the native Dutch it is about 90%. In the age group 50-55, nearly 50% of Moroccans and Turks receive social security while only 16% Dutch.

Labour migrants are a drain on the indigenous population rather than a relief.

It is clear that the Dutch labour market has a massive oversupply of unskilled third-world workers. Apart from social security, there are also intangible costs such as an increase in crime, and especially terrorism, both related to North African migrants.

Africa has 1.2 billion people that will double in the next 25 years, of which huge numbers are about to join European labour force in the coming decades. At the same time the highly educated and skilled western populations will decline, reducing the demand for unskilled labour even further. There is no chance that Europe can afford to keep its social welfare without enforcing a quota on migrants. And even if social security is dropped altogether, the European labour market will reach a situation where there are so many labourers that they become as worthless as they are in Nigeria. For the unskilled European working class it is tantamount to suicide to vote open borders advocates into office.

Does the Economist really suggest that white Europeans are the only ones who can solve Africa’s problems?