For the first time in a long time, concerns about inflation are END_OF_DOCUMENT_TOKEN_TO_BE_REPLACED

From the late 1700’s through the 1800’s the first industrial revolution brought immense benefits to the average Jack. Mass production of textiles, transportation, food, and beer meant that it was no longer just Lords and Ladies that could afford to get hammered.

Indeed, Jack and Jill too could fall down the hill after getting plastered without breaking the bank.

Those with capital owned the means of production. Stuff like mines, railroads, steel factories, and so forth as well as workers were paid to work the machines. 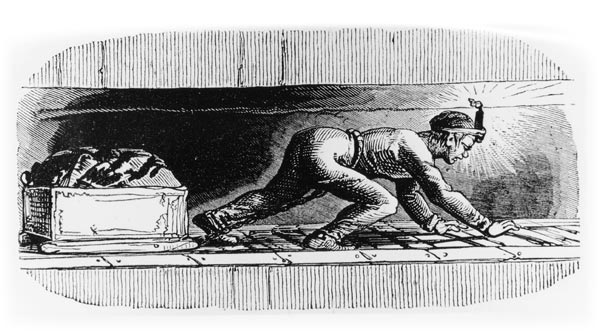 It was the machines which were valuable. And since they were immensely costly the power largely lay with the Lords and Ladies who had the capital available to purchase the machines.

Jack and Jill’s contribution, relative to the cost of the infrastructure such as mines, etc. was relatively small. The value assigned to the contributing parts looked something like this: 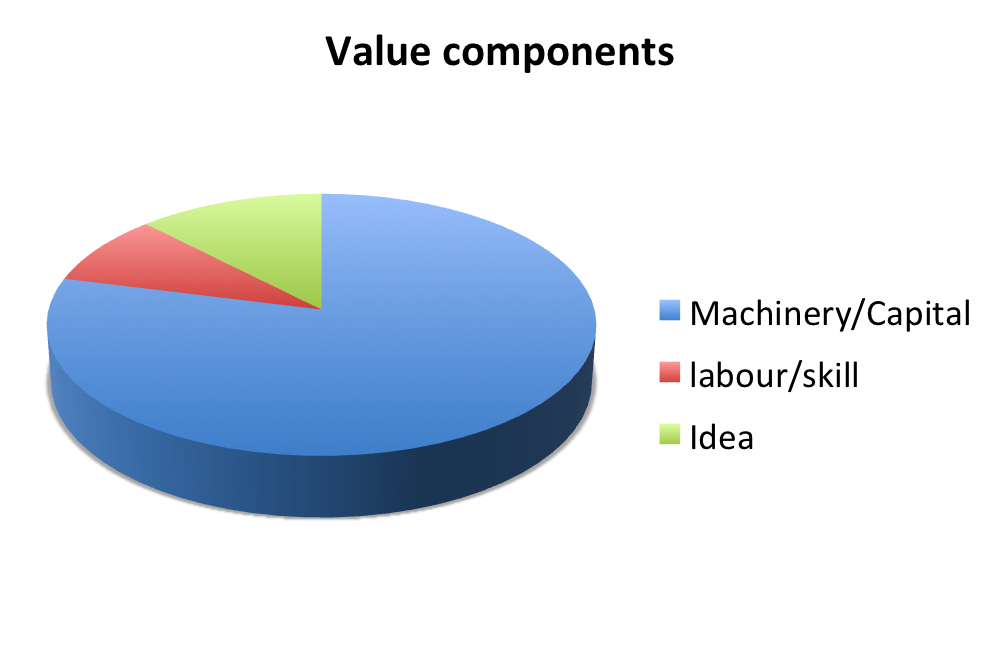 Very rough non-statistical representation for illustrative purposes. Dear quants, don’t get your knickers in a knot if not exact.

In a nutshell, life for Jack and Jill (labour/skill component), while better than pre industrial revolution, kinda sucked. Labour was expendable. Literally. Don’t believe me? Pick up a history book on the era. Nasty!

The second industrial revolution (also known as the technological revolution), which took place between the end of the 19th and beginning of the 20th century meant the Jack and Jill now had, amongst other things, electricity. This also meant they had lighting and telephones, and so now Jill could not only see Jack getting plastered at night but no longer had to wait 3 weeks to tell her mother all about it in a hand delivered letter but could pick up the phone and complain immediately about the drunken debauchery, too.

Wonderful stuff and certainly revolutionary. But like the first industrial revolution, it was still predicated on fairly expensive machinery. As such, those who had capital enjoyed the majority of the wealth. The Lords, Barrons, and so forth still had the upper hand.

The value pie looked a bit more like this: 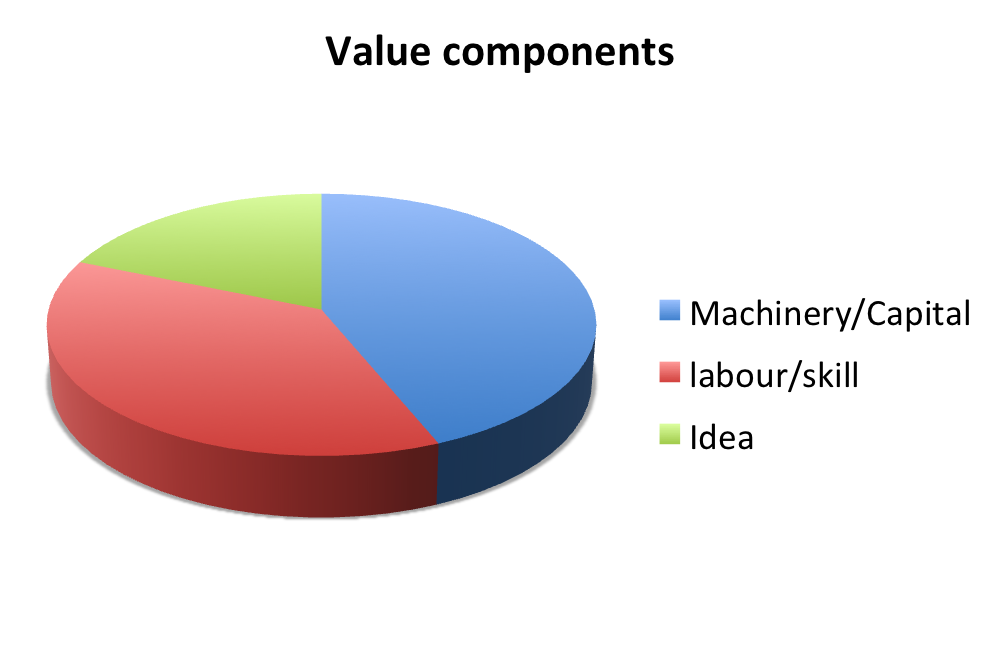 And again… very rough non-statistical representation for illustrative purposes. Dear quants, don’t get your knickers in a knot if not exact.

The digital revolution, which started somewhere around the 1950’s, ushered in digital record keeping, computers, and finally provided the ability for Jack and Jill to watch drunk Russians falling over on Youtube, tell their friends on Facebook they’re just going to the loo, and upload pictures of their kids that nobody will ever look at… ever.

Importantly, the greatest component of value no longer lay in some unattainable (for Jack and Jill) expensive machinery. The cost of these “new” machines have fallen every day since, allowing more and more Jacks and Jills to attain a greater share of the pie.

The functions which could be performed with the new technology allowed for entire industries to be built, and with much less capital than in the first two industrial revolutions.

Labour and skills have become more valuable relative to the other components ever since.

Take a look at the most valuable companies in the world, and you’ll notice that within the ranks are companies which were started with close to zero capital. The idea and the skills to implement the idea were clearly far more valuable than any of the machinery or “hard assets” which form part of the business. Alphabet, Apple, Facebook, Alibaba – you get the picture.

The value pie looks a lot more like this: 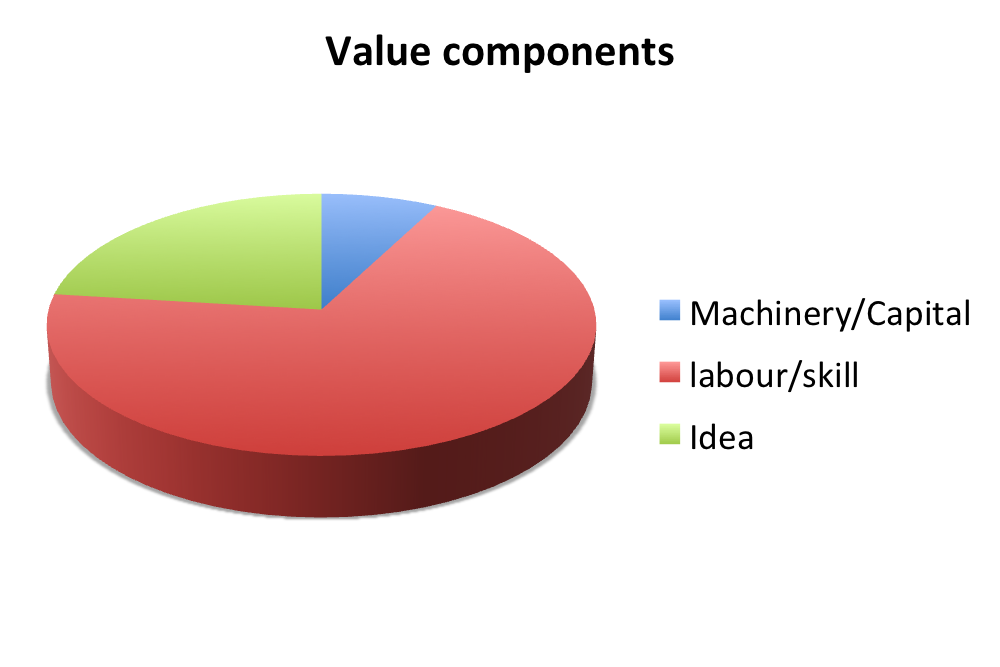 The entire capitalist system has been undergoing these changes over time.

As the cost of labour has risen, so, too, have the parasites which leech off this component. In the early industrial revolution it was easy: tax the factories. Fixed assets could be seized for unpaid taxes and the authorities could tax accordingly.

We’ve slowly been moving towards this rewards function for some time.

Things such as option pools for employees, vesting of equity based on hurdles being met, bonus pools, and so on but it wasn’t until blockchain technology arrived that we have had an entire architecture allowing for an entire contribution based economy to be built.

And if you think this is a bunch of mumbo jumbo bollocks then call me in 10 years time when your employment contract is being coded in a smart contract and you’re being paid in a digital currency that is directly tied to the outcomes of your work and the business you’re working for. A world where you’re rewarded for the products you buy (with a stake of ownership claim) and where you have a vested (literally) interest in the social media platforms you use.

The anonymous messaging service KIK is doing just that. They’re converting all of their VC funding which includes funding of $50m from Chinese internet giant Tencent into a cryptocurrency called Kin. Not only is this cryptocurrency clearly equity or quasi equity, the currency is being used to reward not only owners but developers and consumers.

In their own words:

“Kik is introducing an open source cryptographic token, named Kin, which is envisioned as a general purpose cryptocurrency for use in everyday digital services such as chat, social media, and payments.

Kin will be the unit of account for all economic transactions within the Kin Ecosystem, and it will serve as the basis of interoperability with other digital services. In character, Kin is a pure cryptocurrency of fixed supply. It is fractionally divisible and long-term noninflationary.

However, as described below, only a small portion of the Kin supply will become liquid in the near future, as most of the Kin supply is reserved for the Kin Rewards Engine. Like other cryptocurrencies, units of Kin are fungible and transferable, and they will be expected to trade on cryptocurrency exchanges.”

Here’s Kin’s website and for those of us who experience brain orgasms from revolutionary disruptive problem solving concepts go read the Kin whitepaper.

The internet, which is as good a metaphor as any other, is as much a collection of technologies as it is a collection of communities. The bones of it were built with DARPA and it was in 1980 that TCP/IP was adopted as the standard. in other words, it took a long time to get to what we have today.

But hell, here we are nearly 40 years later, and though I still can’t figure out how my toaster makes such crunchy lovely toast, what’s really changed my life is the internet. And I bet you this: not one person, even those who were building the pieces, could have envisaged what it would look like.

Today, blockchain technology is still considered by many to be solely for people who think it’s safe to let their children play with electricity (i.e. mad people).

Now, I’ve even tried to explain how revolutionary this is to my wife but she hit me over the head with a rolled up newspaper, and so instead I’m going to try my luck on you my readers.

Mark my words, this is going to have a similar impact to that of the internet and its implications threaten to be much broader and potentially more disruptive than even our wildest imaginations might be after a bottle of Kalashnikov vodka on an empty stomach. And yes, because the pie is going to change, taxation, too, is going to change.

“If you want to succeed you should strike out on new paths, rather than travel the worn paths of accepted success.”  — JD Rockefeller