END_OF_DOCUMENT_TOKEN_TO_BE_REPLACED

AMC Entertainment (NYSE:AMC) shares are up about 5% so far in the new END_OF_DOCUMENT_TOKEN_TO_BE_REPLACED

The 5 S&P 500 Stocks Down Since The March Bottom

Since the local market bottom on March 23rd, 2020, the S&P 500 (SPY) has rallied a remarkable 65%. While Tech led in the recovery, the gains have not all come from the megacaps. A version of the S&P 500 that equal-weights the constituents (RSP) has done even better, rallying nearly 75% since the March bottom. 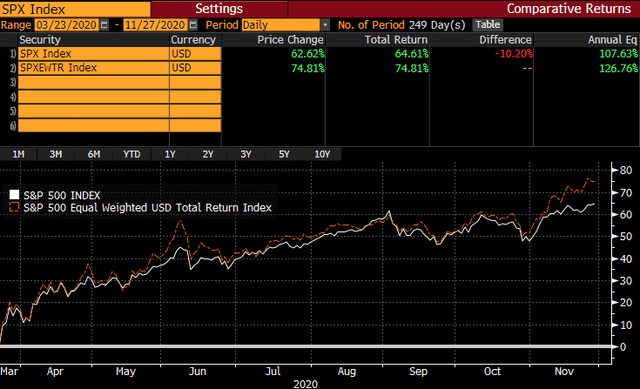 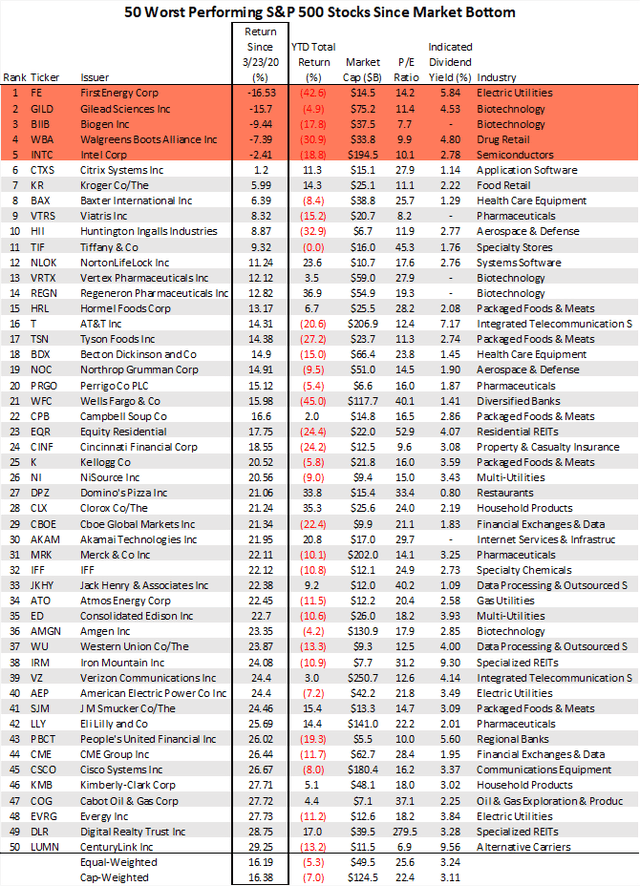 FirstEnergy is the absolute laggard over this time period for an idiosyncratic governance reason. Management has been ousted for their alleged involvement in a plan to influence Ohio politicians with regulatory oversight over current and former company subsidiaries. Potential fines and a worsened climate for its regulated business has pressured the share price.

Gilead Sciences was an early winner given the potential success of its investigational therapeutic remdesivir in treating COVID-19. Through the March lows, it was the second best performing S&P 500 stock behind only Regeneron (REGN). Since that date, the stock is the second worst performer. The World Health Organization has recently questioned the efficacy of the drug. The rapid advancement of vaccine alternatives to prevent COVID-19 may also limit future utilization of this therapy.

Biogen, the third worst performer on this list, has fallen given disappointing results for its potential blockbuster Alzheimer's treatment announced in early November.

Walgreen's Boots Alliance, a surprising laggard with competitor CVS Health (CVS) up more than 30% over this horizon, has faced a series of internal and external pressures. The company's CEO search and limited financial flexibility versus its largest competitors likely made it less nimble to address the challenges from COVID-19 related shutdowns. Longer-term pressure from lower cost e-commerce providers has also likely weighed on shares.

Tech has been the big winner in 2020, but an old tech superstar has been a laggard as Intel has faced competitive pressure on multiple fronts for its chip business and a timing delay of a key product.

Stocks were down 30% through March 23rd, so this list of laggards since that date actually outperformed through the March lows. They have since lagged in the recovery and are now trailing on a year-to-date basis as we head into the last month of the year. With such a dramatic move in stocks off the March bottom, I wanted to look at lagging market participants. I hope other readers find interesting takeaways to evaluate further from this work.