The Nasdaq tumbled 2.6% Monday and was down big early Tuesday, before END_OF_DOCUMENT_TOKEN_TO_BE_REPLACED

Tech wrecks are common. Apple (NASDAQ:AAPL) stock is no exception.We had one END_OF_DOCUMENT_TOKEN_TO_BE_REPLACED

After the market closed on April 26, electric vehicle company Tesla Inc. (NASDAQ:TSLA) reported earnings results for the first quarter of 2021.

Following its announcement earlier this month that first-quarter vehicle deliveries had set a new company record, Tesla reported earnings that beat Wall Street's estimates, though revenue fell short of expectations. Shares had gained more than 1% to $738.20 throughout the day's trading in anticipation of the news, but dipped slightly after hours. 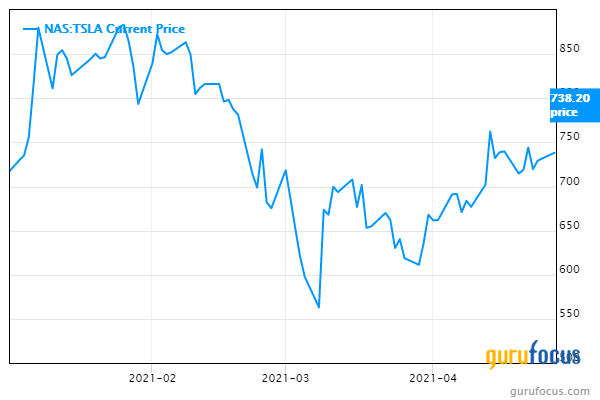 Earlier this month, Tesla reported that first-quarter vehicle deliveries had set a new company record at 184,800, with the majority of the growth in demand coming for the cheaper Models 3 and Y. The record number of deliveries came even as Tesla and the rest of the auto industry dealt with a global semiconductor shortage.

Automotive revenue came in at $9.00 billion compared to $5.13 billion in the first quarter of 2020. The sale of regulatory credits accounted for $518 million of automotive revenue, up from $354 million a year ago. The automotive gross margin increased more than 1% to 26.5%.

Despite the average selling price of vehicles decreasing, the company managed to improve its gross margin sequentially to 21.3% due to cost-cutting efforts and lower average cost per vehicle. The operating margin for the quarter was 5.7%, up from 5.4% in the previous quarter and 4.7% in the prior-year quarter.

Cash and cash equivalents were down $2.2 billion year over year to $17.1 billion. Of this, $1.2 billion was due to the company's bitcoin purchase (Tesla now accepts bitcoin transactions), while another $1.2 billion went toward debt payments. Free cash flow was $293 million.

Tesla plans to begin production of the new Models S and X in the second quarter, so the average cost per vehicle will likely increase in response. The company also said that its two in-progress Gigafactories in Berlin and Texas are on track to begin production some time in 2021, with Tesla Semi deliveries also expected to begin this year.

In its letter to shareholders on Monday, Tesla maintains that it still plans to achieve 50% average annual growth in vehicle deliveries over a multiyear horizon. "In some years we may grow faster, which we expect to be the case in 2021. The rate of growth will depend on our equipment capacity, operational efficiency and capacity and stability of the supply chain," the company noted, indicating that despite semiconductor shortages, it still expects to be able to procure enough materials to significantly increase vehicle deliveries in full-year 2020.

In terms of its valuation, Tesla remains an expensive name at a price-earnings ratio of 1,179.25. Not even the 74% revenue growth or 304% adjusted earnings per share growth can keep up with the stock's 361% run-up over the same one-year time frame. 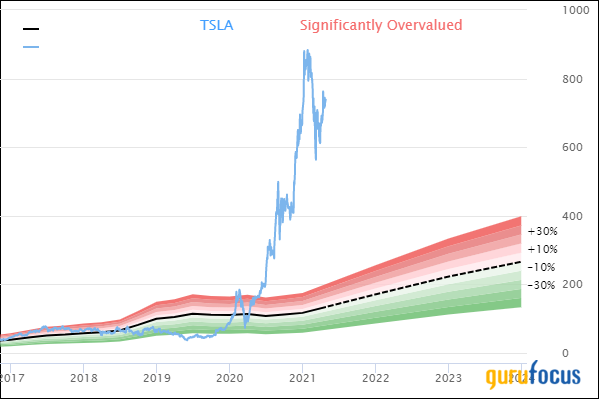 Thus, Tesla remains a name that will almost certainly see high volatility in its stock price in the years ahead. If it can meet its lofty growth targets, it is possible that the stock price could continue to soar, though as the company noted, the consistency of this growth might suffer from supply chain issues and will also depend on the expansion of production capacity and the sale of regulatory credits.

Disclosure: Author owns no shares in any of the stocks mentioned. The mention of stocks in this article does not at any point constitute an investment recommendation. Portfolio updates reflect only common stock positions as per the regulatory filings for the quarter in question and may not include changes made after the quarter ended.