Last year was probably the toughest in recent history on airline stocks. END_OF_DOCUMENT_TOKEN_TO_BE_REPLACED

GameStop (NYSE:GME) is up 85% over the past month through June 8. END_OF_DOCUMENT_TOKEN_TO_BE_REPLACED

They say history may not exactly repeat, but it does often rhyme.

That’s the basic framework for a new theory from Eddie Yoon, founder of think tank EddieWouldGrow, who says that Tesla’s stock in 2019 looks very similar to Netflix’s stock performance in 2011.

Back then, shares of Netflix — under pressure after the company upped prices for its newly separated DVD-mailing and streaming services — dropped 80% over the course of several months, a vicious decline that now seems part of the distant past.

Yoon, who is the author of “Superconsumers: A Simple, Speedy and Sustainable Path to Superior Growth,” says the recent action in Tesla, which has lost about 35% year to date and nearly 43% since it made a 52-week high last August, reminds him of that dark moment for Netflix. 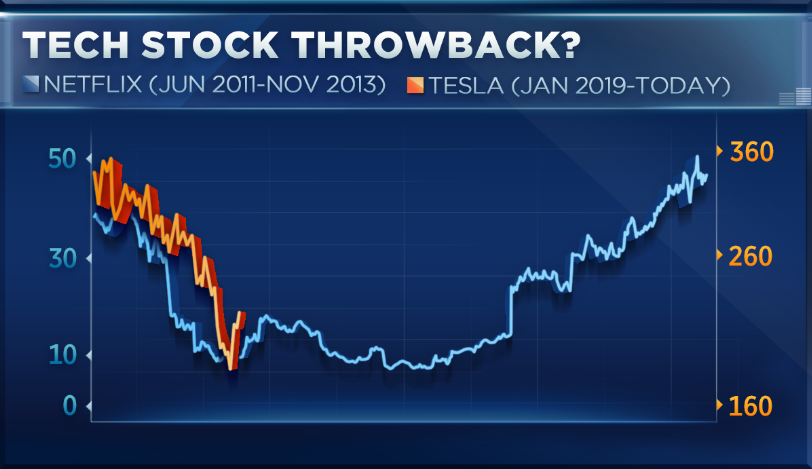 In the wake of its strategy flub, Netflix’s subscriber pool dropped to 800,000 customers, Yoon wrote in a Barron’s article. But, now, its shares are up nearly 2,900% since that trough and the company boasts nearly 150 million subscribers worldwide, proving how resilient the demand for its product is, the consumer expert said.

“Gloom and doom seemed to occur about the demand that had run out for streaming,” back in 2011, Yoon said Tuesday on CNBC’s “Trading Nation.” “When I looked at it then, I had written several articles about how, ‘You know what? Streaming demand has a ton of growth.’”

Now, Yoon’s “seeing a very similar situation with Tesla,” he said. “You might say media and cars [are] completely different industries, but they’re going direct-to-market to some degree. They’re kind of cutting out the middleman.”

These industry-changing qualities — and some notable shifts in the U.S. auto market — make Yoon especially confident that Tesla can make it out of its monthslong bear market.

Tesla shares were volatile in early Wednesday trading after CEO Elon Musk told shareholders that “there is not a demand problem” at Tesla and that the company had a “decent shot at a record quarter on every level.”

“Stocks and companies like Tesla, one of the things that’s notable about them is when they compete against compromise,” Yoon said. Typically, in the auto industry, “you have people who buy fun cars and people who buy functional cars. Tesla has broken the compromise so that you can actually get both in the same car.”

That has led people who typically opt for function with Toyota Priuses, Toyota Camrys or Honda Accords to buy Teslas “at significant price premiums” to those other models, a trend that makes any bear case based on shrinking demand for Tesla’s vehicles downright “silly,” Yoon told CNBC. 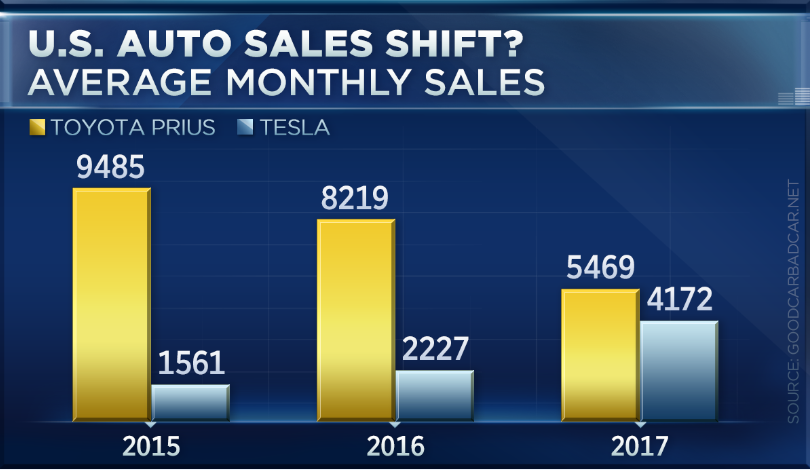 “If you look at the cumulative losses that Prius sales have had [since 2015], it’s about the same amount that Tesla has grown by in that same four-year time period,” he said. “I think you’re seeing a massive amount of consumers trade up out of ... mass-market pricing into something because they no longer have to choose between fun and function.”

Citing his own proprietary research, Yoon said he also found that 50% of Honda Accord and Toyota Camry owners both wanted and could afford to pay up for a Tesla, putting half of those sales — 700,000 per year in the U.S. — at risk of disruption.

“That’s a significant amount of near-term demand, and then that can, I think, tie them over until they kind of catch the wave of the next [electric vehicle] growth that’s coming up,” Yoon said.