The meme stock rally has taken off in recent weeks. Shares of END_OF_DOCUMENT_TOKEN_TO_BE_REPLACED

Tesla Can Create Its Own Catalyst. Split The Stock Again.

Tesla stock needs something to push it out of its recent slump. The company might be able to create a catalyst, but not one related to new models, features, or financial performance. The latest idea being floated: Tesla could split its stock again.

The idea comes from Gary Black. He isn’t new to investing or to Tesla (ticker: TSLA). Black has a long history on Wall Street as an analyst and professional money manager, including stints at Goldman Sachs Asset Management and Janus.

These days, Black shares investment thoughts mainly on Twitter (TWTR) to nearly 78,000 followers who can read his thoughts and even download his financial projections.

Black tweeted out Tuesday that “it’s worth debating” when Tesla will split its shares again. Tesla announced a five-for-one split in mid-August 2020. Black reminded investors that from the time Tesla announced the split to when it actually happened at the end of the month, shares rose 81%.

Then, from the actual split to year-end, Tesla stock added another 42%.

Another split might not drive shares up 81% in a matter of weeks again, but it might help break the stock out of its recent funk. Tesla stock is down about 12% year to date, trailing behind comparable gains of the S&P 500 and Dow Jones Industrial Average as well as other automotive stocks.

Stock split bulls, on the other hand, say that a split might make shares more accessible for some retail traders, particularly those who can’t always afford to build a position in a stock with a relatively high absolute share price.

More important, bulls believe a stock split signals to investors that more good news is on the way. It’s an implicit vote of confidence from management who see the stock gaining from news coming down the road.

In that way, a stock split really isn’t its own catalyst. It’s pulling forward stock gains from future catalysts.

In 2020, the good news that came after the split was hitting full-year 2020 delivery guidance amid the pandemic, as well as the stock’s inclusion into the S&P 500. Some of the August stock split gains could be attributed to those two factors.

In 2021, positive developments on the way might include production starting at new plants in Austin, Texas, and Germany, along with updates about Tesla’s driver assistance software known as Full Self-Driving, or FSD. Tesla is testing new versions of FSD on roads today. The company didn’t immediately respond to a request for comment.

Of course, for Black, calling a stock split might sound like “talking your book,” which is Wall Street parlance for speaking positively about positions one already holds. Black does own Tesla stock, but he also called for a stock split back in July 2020, about a month before Tesla said it would split its stock five for one. 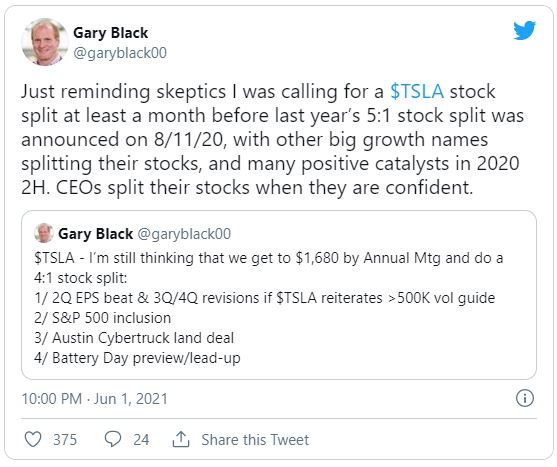 His 2020 tweet represents an impressive call—another reason investors should pay attention in 2021. Still, investors have to evaluate if the number and importance of any catalysts this year will match those of 2020.

For now at least, investors don’t appear to think another split is coming or that the setup for the rest of 2021 can match 2020. Tesla stock closed 0.2% lower to end Tuesday at $623.90, despite Black’s suggestion. The S&P 500 closed nearly flat.