We witnessed the tale of two markets in 2020.The market experienced a END_OF_DOCUMENT_TOKEN_TO_BE_REPLACED

END_OF_DOCUMENT_TOKEN_TO_BE_REPLACED

Every year in January and early February, the NFL playoffs run their END_OF_DOCUMENT_TOKEN_TO_BE_REPLACED

Tech Stocks Haven’t Done This Since 2005, And It Could Mean Trouble, Traders Warn

Could tech be nearing a top?

But tech is also the most expensive it’s been in years. On a forward-earnings basis, the XLK is the priciest it’s been since January 2005, a sign experts say could mean the sector is at risk of peaking.

“I do think technology is close to peaking out in the short run,” Mark Newton, a technical expert and the founder and president of Newton Advisors, told CNBC’s “Trading Nation” on Tuesday.

Noting that the sector’s run this year is “getting a little bit stretched” despite some bullish drivers within the space, Newton said four key factors were keeping him wary of tech’s trek higher.

First, “the price is right up against the upper edge of this triangle pattern that’s really been ongoing since last September,” he said. “That’s a little bit of a concern. It’s different than a regular type of breakout. Prices are actually very close to what I would call technical resistance.” 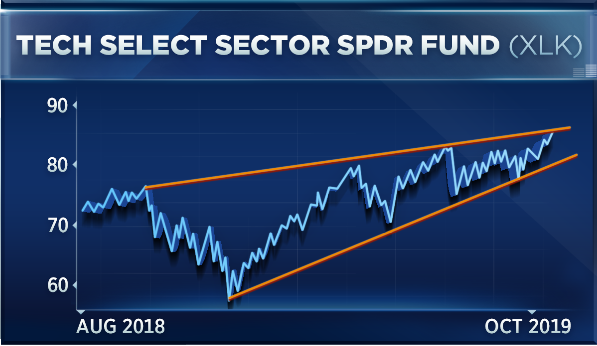 Second on Newton’s list of concerns was the trend behind tech’s nearly 40% tear. While the climb itself has been impressive, momentum has not kept pace, still below its levels from January 2018, when the XLK rallied more than 7% in a month. 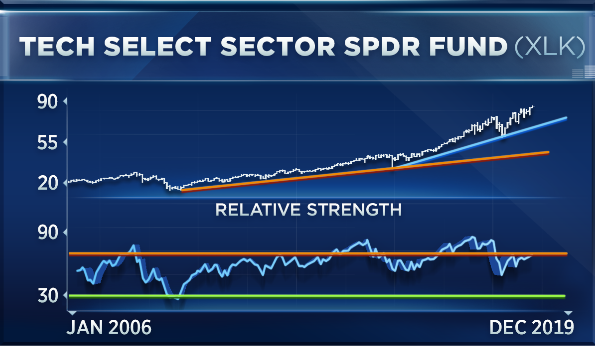 “This is what we call a negative momentum divergence. It’s not necessarily an immediate sell, but it’s definitely cause for concern and a little bit of a warning,” he said.

Third, Newton worried that an “exodus” out of growth stocks and into value plays could weigh heavily on the tech space. He noted that software stocks, tracked in part by the iShares Expanded Tech-Software Sector ETF (IGV), are already feeling the pain. The IGV has been stuck in a trading range in recent months, falling nearly 5% since late July.

“The fourth is that you’re entering a time towards the end of the year where we definitely usually tend to see a real mean reversion out of the winners and into the laggards,” Newton said.

And, with tech so drastically outperforming the market’s other sectors — beating the next-best performer, the industrial sector, by more than 10% — it’s in a risky position heading into year-end, the technician said.

“I think there should be some profit-taking into the latter part of November or December, and tech might not be the place to go between now and early next year,” Newton said. “So, yes, trends are bullish. That doesn’t always mean that you just have to simply buy. Of course, you do want to see the bigger evidence of trend break before getting too defensive, but I don’t think it’s a good risk-reward at current levels.”

“The value rotation is definitely something that tech is going to have to work against, but I think there’s even a bigger macro trend, which is the macro economy,” Sanchez said. “It’s likely going to trough out sometime in 2020, meaning that we’re going to be seeing weaker and weaker numbers. ... So, what does that mean to the tech sector? Well, if you’re a company and you are currently buying or subscribing to software, you have hardware, you’re going to put those purchases off.”

While Sanchez noted that software might be safer in the near term because it boosts productivity, she still harbored concerns that sales would “start to stagnate” and “big growth expectations could be disappointed in 2020.”

And although multinational juggernauts like Cisco and Apple aren’t overvalued just yet, according to Sanchez, software and one other group could be the key catalysts that take tech lower, she said.

“Software is the high flyer in the sector, and if you look at what’s really driving that, it’s the likes of things like Salesforce that is trading at 200 times trailing earnings ... and 92% of analysts still rate it a buy, which is to say that there is some room for disappointment there,” the CEO said.

“The other space that I think is ripe to sort of bring the entire tech sector down along with software is the fintech space: the Visas, the Mastercards, the Global Payments,” Sanchez said.

“If you look at ... whether or not money continues to flow into that space to fund innovation so that the likes of Visa and Mastercard continue to buy new companies that make their businesses more valuable, that may also start to falter in 2020. So, I think software and fintech are really the spaces that could bring down the whole tech play in the midst of the value rotation and in the midst of slowing economy.”

The XLK and the IGV were down modestly in early Wednesday trading. The Global X FinTech ETF (FINX), which tracks the fintech space, fell nearly 1%.