If something looks too good to be true, then it probably is. And right now Nvidia (NASDAQ:NVDA) stock is not the good-looking, but always imperfect investment it once was.

Let’s see what’s going on in NVDA stock, off and on the price chart, then offer a risk-adjusted determination for today’s and tomorrow’s investors.

Shares of Nvidia were up big-time Monday to begin the new calendar month. Not that the semiconductor GPU giant was alone. It wasn’t. The tech-heavy, large capitalization Nasdaq composite gained 1.47%.

Nice, right? Yet Nvidia’s daily gain of 3.7%, similarly fresh all-time-high, burly market-leading return of 114% in 2020 and recent capitalization crowning (and crowing), should also have investors cautious going forward in the near term.

One consequence of Nvidia’s outsized stock performance, along with a recent chip manufacturing warning from Intel (NASDAQ:INTC), 2020 has allowed Nvidia to be convincingly priced more dearly on a valuation basis over its competitor for the first time.

Nvidia now sports a market capitalization of more than $261 billion compared to Intel’s valuation of $203 billion. Only Taiwan Semiconductor (NYSE:TSM) at $384 billion is larger by this measure.

Intel is still the world’s largest semiconductor by other metrics though. The chip giant still dwarfs Nvidia in overall revenues by more than six-fold. Nvidia’s trailing 12-month sales come in around $12 billion versus the former’s near $76 billion.

Despite a strong-looking long game for investors, that outlook doesn’t mean NVDA stock is above scrutiny. And given what it’s taken to get shares where they are today, Nvidia’s other imperfections are looking perhaps a bit too well-priced to be sustainable.

Call me a doubting Thomas. But financial laundry such as the stock’s steep 53x forward price-earnings ratio made even pricier at 4x earnings growth is a worry. Nvidia’s staggering price-sales multiple of 22x also should raise more than eyebrows.

Versus competitor Advanced Micro Devices’ (NASDAQ:AMD) lofty 11x figure or Intel’s much lower, but likely to climb 2.63x multiple, Nvidia’s pricing should be a point of concern, rather than a wall of worry to climb. That’s already happened. 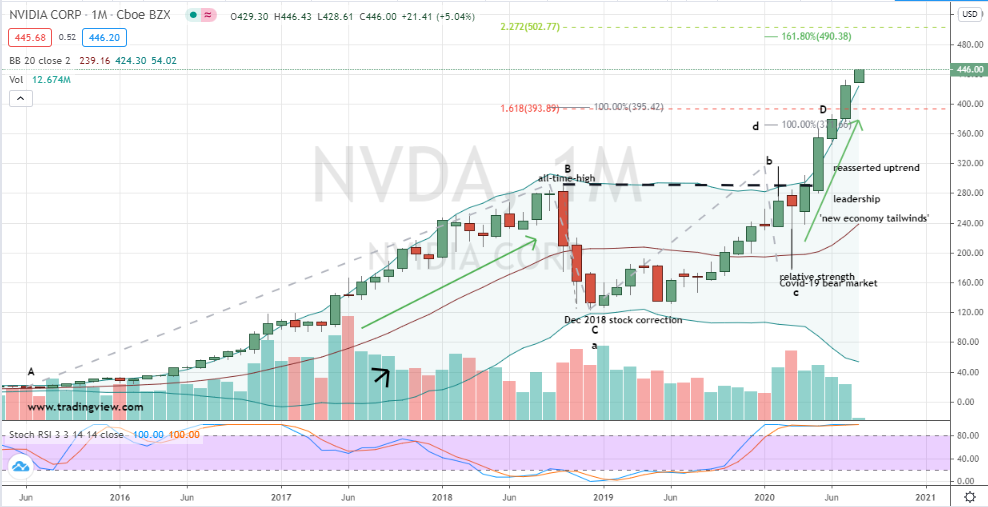 Once again, don’t get me wrong. I like Nvidia and have been bullish on shares as recently as June. And one day I’ll likely be upbeat on the company’s multi-faceted paths to growing its 800-pound gorilla stature further. Now though, the price chart also agrees with the idea NVDA isn’t too big to fail in the near term.

Stocks correct all the time, even in the healthiest of markets. Irrespective of whether investors view today’s environment as risky or not, corrections for a stock of Nvidia’s caliber can be as steep as 30% while still be considered typical. And on the monthly price chart, Nvidia’s strength this year is hinting today’s gains shouldn’t be taken for granted.

Technically, August’s start to the month has allowed shares to gap and trade entirely outside Nvidia’s upper Bollinger Band. It’s a first. But given the circumstances, today’s share pricing shouldn’t be cause for momentum-style celebrating. Also a fear, Nvidia has furthered its move into a wide resistance zone comprised of Fibonacci extension levels based on a couple long-term, two-step (AB = CD) pattern completions.

Lastly, I’d offer a nearly worthless, but not to be entirely ignored longtime, overbought stochastics indicator as evidence this party is not just getting started.

Bottom line, I’d recommend NVDA investors already enjoying profits on paper, look to reduce open risk by cutting down position size and / or structuring a collar to further guard against that exposure.

And for today’s would be investors? Tomorrow or a bunch of them strung together with no signs of the fear of missing out, would be a more promising start to step up to the plate with Nvidia.