Stocks Buoyed By Trade Hopes, Bond Yields Up With ECB On Deck

A gauge of global equity markets climbed on Wednesday on signs of gradual progress in the trade war between the United States and China, while bond yields rose as investors remained unconvinced what stimulus measures the European Central Bank will provide at its meeting on Thursday.

Stocks on Wall Street rose, with the S&P closing above the 3,000 mark for the first time since July 30, buoyed by optimism on the trade front after China announced its first batch of tariff exemptions for 16 types of U.S. products days ahead of a planned meeting between trade negotiators.

“Maybe a little bit of an olive branch. The market has been sensitive to any developments on the China-U.S. trade war front and this would be consistent with that,” said David Joy, chief market strategist at Ameriprise Financial in Boston.

The trade hopes also aided in pushing European shares to close at a six-week high, with shares of the London Stock Exchange ending the session up 5.9% after Hong Kong Exchanges and Clearing made a surprise $39 billion takeover approach.

The pan-European STOXX 600 index rose 0.85% and MSCI’s gauge of stocks across the globe gained 0.72%, on pace for its sixth straight day of gains, its longest winning streak in three months.

U.S. Treasury yields rose for a third day, tracking those in the euro zone bond market, as investors were unsure about the stimulus measures the ECB will employ, with a report late on Tuesday that the central bank may delay quantitative easing adding to the uncertainty.

“There was an expectation that the ECB would be aggressive with easing,” said Tom Simons, economist at Jefferies in New York. “If they’re not, that kind of changes the calculus a little bit. There’s nervousness on that front, so there’s a lot of paring back of positions.” 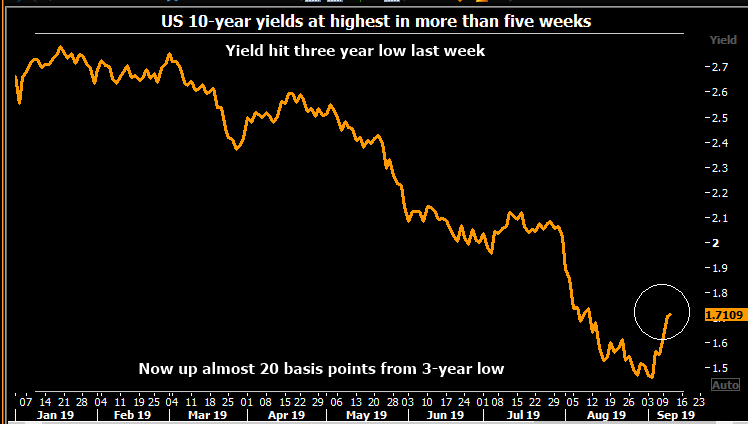 The European Central Bank’s meeting comes ahead of next week’s policy meeting by the U.S. Federal Reserve, which is still widely expected to cut interest rates even as economic data showed producer prices unexpectedly rose in August.

U.S. President Donald Trump pushed the Fed to cut interest rates to zero or into negative territory in a pair of Twitter posts on Wednesday.

In currencies, the euro weakened to a one-week low against the dollar ahead of the ECB meeting, while the dollar was on track for its best day in nearly two weeks against a basket of major currencies.

Oil prices slumped more than 2% after a report that Trump weighed easing sanctions on Iran, which could boost global crude supply.