The meme stock rally has taken off in recent weeks. Shares of END_OF_DOCUMENT_TOKEN_TO_BE_REPLACED

Stocks And Bonds Unlikely To Keep Rising Together

Suddenly, 2018 is looking like a bad dream. Financial markets have been magically transported back to the halcyon days of early 2017, when stocks, bonds and just about everything else rose in peaceful unison (see Chart 1). 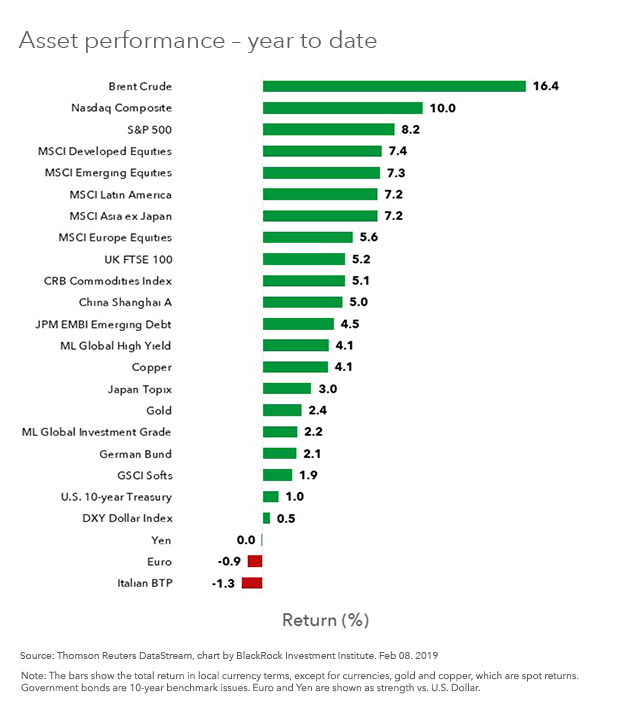 That stocks have had a spectacular start to the year is well-known. What is less remarked on is how well defensive assets have performed: Gold is up approximately 2.5%, and a broad index of U.S. bonds is up about 1%.

The respectable performance of U.S. bonds, particularly when viewed in the light of a surging stock market, is a bit odd. U.S Treasury 10-year yields bottomed on January 3rd at 2.55%. While interest rates have backed up since then, the increase has been negligible. Other bond markets have behaved in a similar fashion. German Bund yields have fallen to 0.10%, the lowest since the fall of 2016. Stubbornly low yields are starting to look out of place against an increasingly "risk-on" market. Consider the following:

1. Economic data has been decent.

While the global economy is slowing, U.S. economic data has been stable, bordering on respectable. The economy produced over 300,000 new jobs in January. At the same time, manufacturing gauges rebounded, although they remain well below the level of a year ago.

To the extent investors rely on bonds as a hedge against equity and economic risk, there has been less need to hedge. The S&P 500 has gained 8%, the Nasdaq around 10% and crude oil around 16%.

Stubbornly low rates and a strong stock market coexisted for much of 2017. That said, today's market looks somewhat different: cyclicals are leading. With the exception of real estate, the best-performing sectors are energy and industrials. At the same time, more defensive sectors, notably healthcare and utilities, are lagging. This pattern seems at odds with stubbornly low bond yields.

To reconcile this contradiction, look no further than the Federal Reserve (Fed). A large part of what drove fourth-quarter volatility was the impression of a hawkish Fed on "auto-pilot." Recent comments suggest a less aggressive, more patient stance. Whether rightly or prematurely, investors have come to believe that the hiking cycle is done. In the process, investors are assuming a lower terminal Fed Funds rate, justifying lower bond yields.

There are several problems with this scenario. The first is that the Fed's own forecasts still suggest hikes in 2019. Conversely, if the market is right and the Fed is done, it is not obvious that economic growth will be strong enough to support the late-year earnings rebound the market is expecting. Finally, all of the above ignores the still-unresolved trade dispute with China. In other words, for bonds and stocks to continue to rise together, everything has to go right in a very particular fashion.