How does this 30% plummet in four weeks compare to past panic selloffs? It matches them, and that is good news. There is a limit to free falls because there are always buyers on the sidelines waiting for signs of a panic bottom.

Moreover, the news flow has been a persistent source of negativity. When no one foresees a turnaround and forecasts of worse to come are prevalent (we just got our first, ominous Dow 15,000 warning), it is an excellent time to consider taking a contrarian stance.

To get out of this bearish funk, we need a sense of improvement. One way to start is to compare our plight with the past. Seeing is believing, so let's examine the graphs of three familiar and dramatic stock market selloffs: 1929, 1987 and 2008.

(In each graph the current market decline is in red. It is lined up with the past drops and subsequent moves, shown in green.)

The Roaring 20's stock market bubble ended with a panic selloff similar in size and speed to today's plummet. (A common misconception is that the crash was one steady fall through 1932. As shown, there was a partial recovery period into 1930 before the extent of the economic slowdown and financial problems became apparent.) 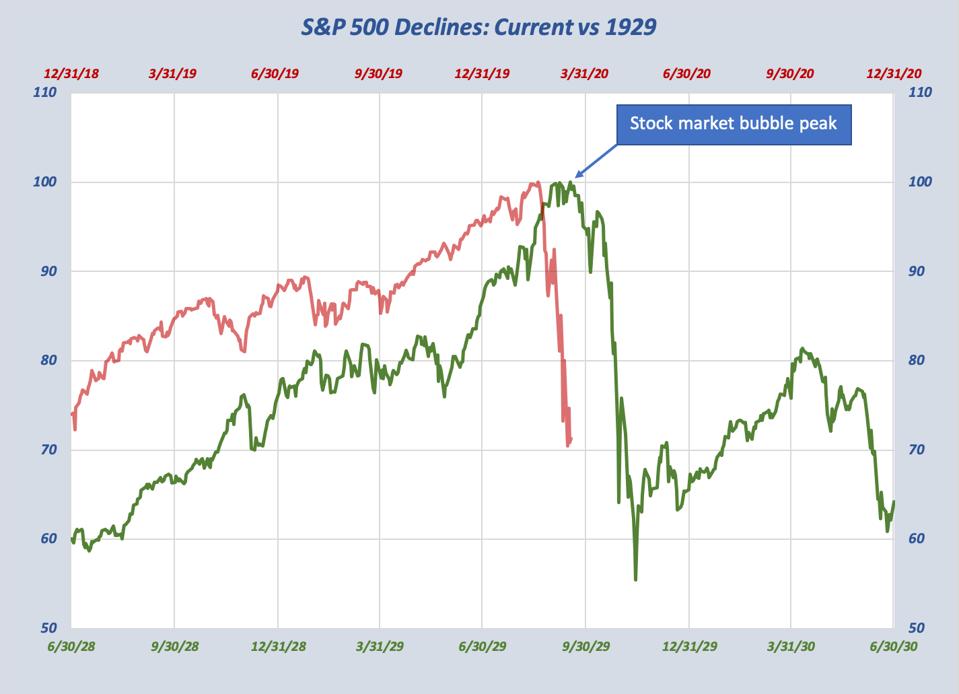 The 1987 growth stock run-up was enlarged by a flawed system adopted by pension funds: buy stocks when they rise, and sell them when they decline. When the market weakened, this approach created a flood of sell orders that hit the declining market and created the sharp fall. It, too, was similar in size and speed to today's plummet. 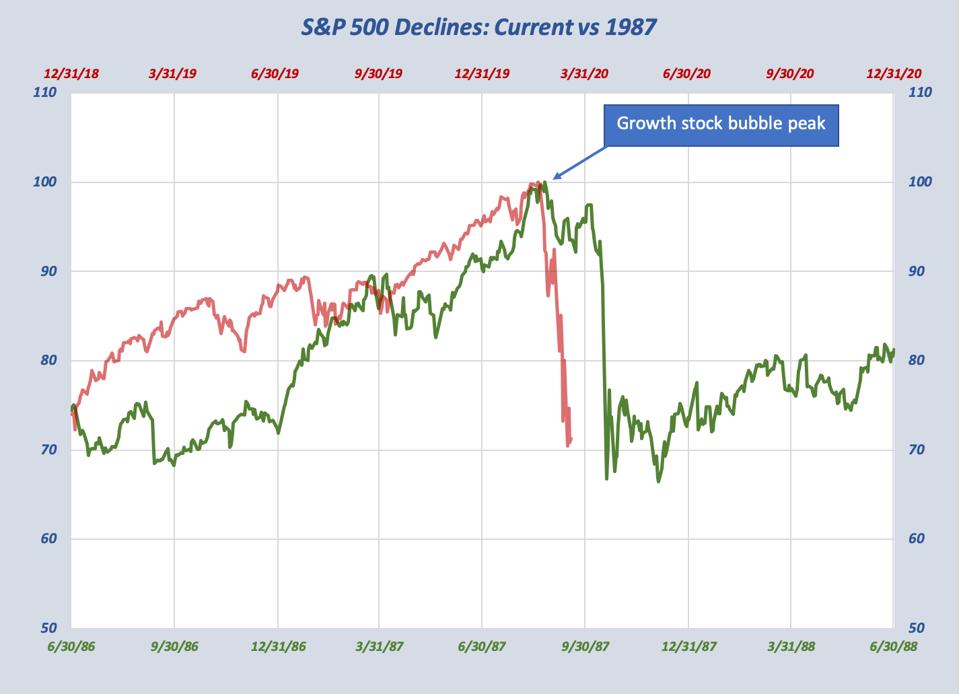 The stock market had been declining due to weakening fundamentals and growing concerns. Then, the financial system crash started when Lehman Brothers filed for bankruptcy, creating panic stock market selling. This drop also was similar in size and speed to today's plummet. 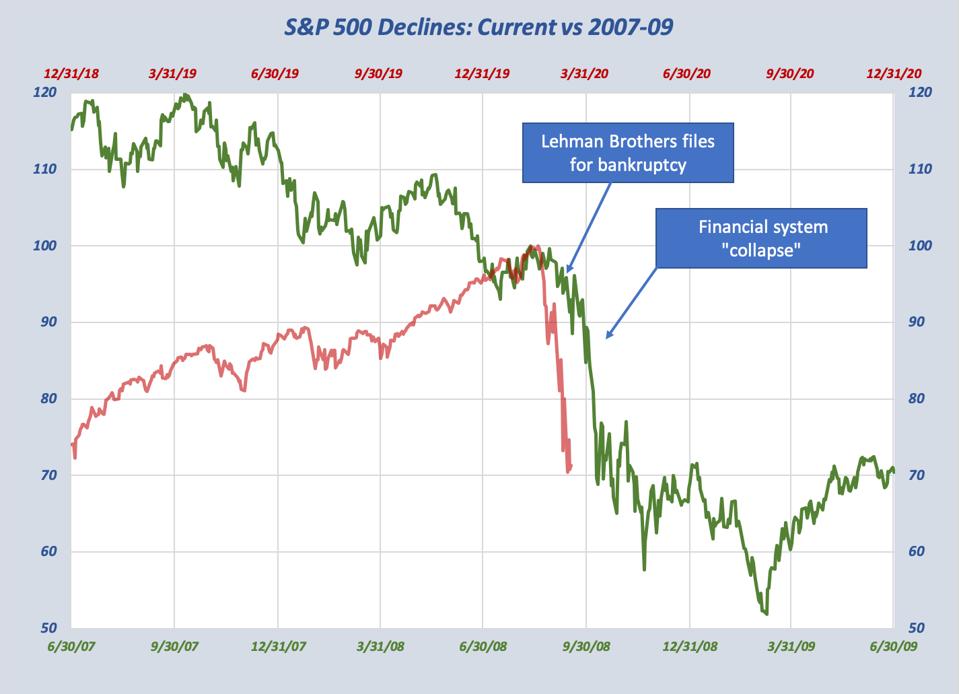 This period started with the peaking of the two-year, "Nifty-Fifty" growth stock fad/bubble. It had taken the stocks of companies expected to produce steady growth for years ahead to high valuations of 40x earnings and more. (These were not companies like Amazon and Google. They were steadily growing blue chip companies like Sears, GE, 3M, Bristol-Myers, Xerox, IBM and Schlumberger).

When it came, the valuation adjustment was understandable and not a source of panic selling. However, it coincided with other serious, negative issues hitting the economy, industries and the financial system (including inflation). Worse, those issues increased in negativity as the months rolled on, producing seven quarters of negative stock market returns.

By that end of the bear market, it was down almost 50%, and the news was so bad that depression was a common fear. 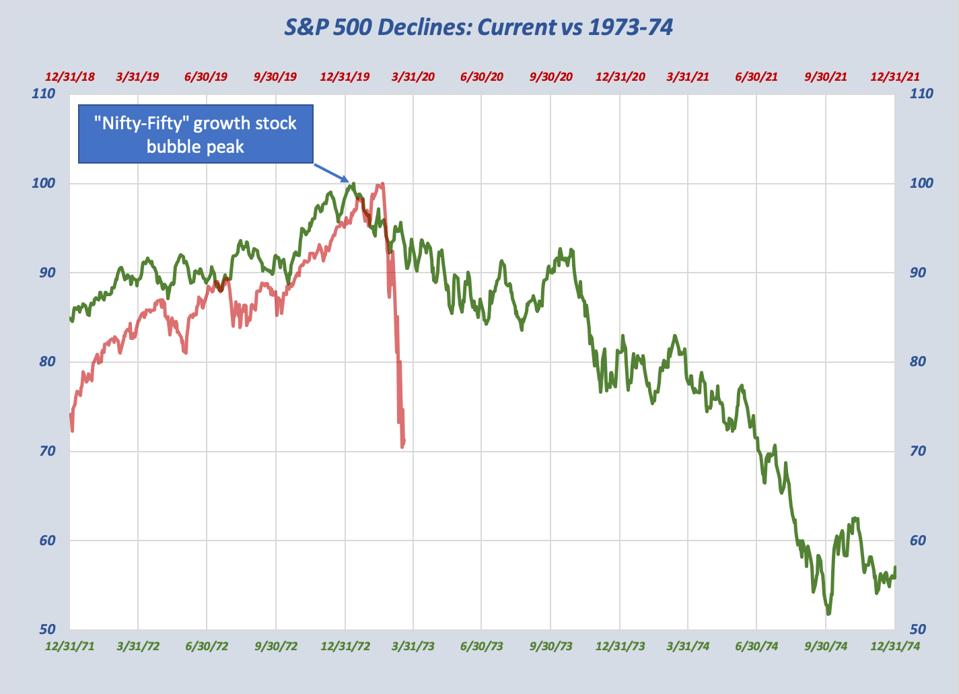 The current panic selloff matches the previous three drops that are familiar to most investors. So, are we at or near a bottom? Perhaps, but not by relying on those comparisons alone. As happened with those selloffs, they ran out of steam because positive (or, at least, less negative) issues appeared.

We are in that same place now, with three items to note:

Are these three items game changers? Not by themselves, but they do begin the chipping away process that will alleviate fears and, in turn, produce a return of gain-seeking stock investors.