Square: Still Expensive After The Drop

While the Mobile Payments ETF (IPAY) has enjoyed a massive year and has outperformed the S&P 500 (SPY), Square (SQ) has been one of the clear laggards in the group. The stock has seen a mere 13% return year to date, paling in comparison to the Mobile Payment ETF's 40% return. Despite lagging the index and consolidating all year, the company remains expensive compared to its peers. This is not helped by the fact that the growth story has some uncertainty after Square noted it is abandoning its adjusted revenue metric after SEC Letter comments. Worse, funds are less eager to buy the dip than they've been in the past, with the first material drop in fund ownership in the past three years. I continue to see Square as an Avoid in the group given its relative overvaluation. 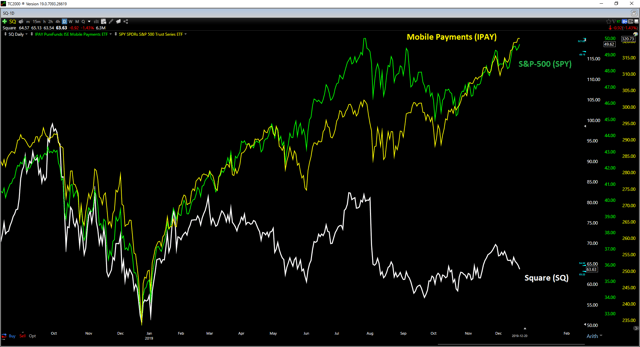 While several IPAY constituents have had impressive runs this year, like StoneCo (STNE) and PayPal (PYPL), Square continues to remain the ugly duckling with a mere double-digit return. While this is still a respectable performance given the stock's 60% return the prior year, I am less inclined to believe we'll be seeing another annual return like this anytime soon. Despite the stock correcting more than 30% from its 2018 highs, Square is still trading at nearly double the forward P/E ratio of its industry group. While a premium would be justified if the stock was a growth powerhouse compared to its peers, this is not the case. Let's take a closer look at the company's earnings growth below.

As we can see from the below chart, Square's annual earnings per share have been in a steady uptrend since FY-2016, after finally flipping to profitable that year. In the past three years, the company has managed to grow annual EPS from $0.04 in FY-2016 to estimates for $0.78 in FY-2019, an incredible growth rate. For FY-2019 alone, the company's annual EPS is expected to grow by 66%. While this is extremely impressive, the market is no longer interested in FY-2019 growth as we close out the year in just a week. Instead, it is focused on FY-2020 and FY-2021 growth, and this is where we're beginning to see some deceleration. 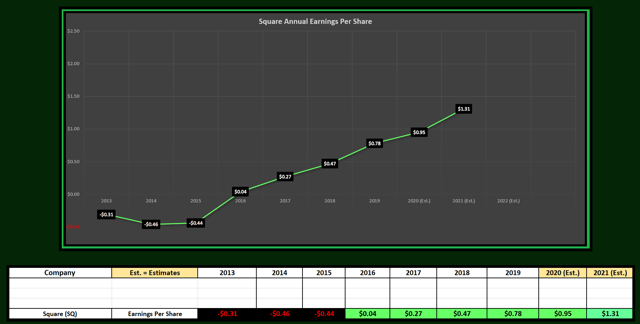 Current estimates for FY-2020 annual EPS are sitting at $0.95, with annual EPS estimates for FY-2021 at $1.31. While these figures represent 22% and 38% growth, respectively, these figures are substantially less robust than the growth the company enjoyed in FY-2018 (74%) and FY-2019 estimates (66%). This earnings slowdown is not ideal, as we don't have any real acceleration in revenue growth to kickstart the prior high-growth phase for Square. Instead, we have revenue growth rate averaging 44% over the past few quarters, down 500 basis points from the 49% quarterly revenue growth rate in FY-2018. Based on relatively flat revenue growth, I believe it will be more difficult for the company to trounce earnings estimates with ease as it did in the past. Therefore, I see the current earnings estimates as realistic and not overly conservative.

As we can see in the above chart I've built, Square's growth rate is the 2nd highest among its peer group, with StoneCo being the growth leader. These FY-2020 annual EPS growth rates are based on current estimates as of Friday's close, and I've generally found estimates to be quite accurate on $10 billion-plus market capitalization companies. The median annual EPS growth rate for the group is 19%, and Square is projected to grow annual EPS 22% next year. Therefore, Square is only a smidgen above the average growth rate for the peer group. Based on this, one could argue that Square deserves a slight premium versus Mastercard (MA), Visa (V), and PayPal (PYPL) with marginally lower growth rates. However, Square's valuation sits at double their earnings multiples. Either Square's annual EPS estimates are far too conservative at $0.95, and it's going to smash these estimates, or this premium valuation is not justified at all.

As the above chart of forward P/E ratios for the group shows, the group median forward earnings multiple is 37.21x, while the group average is 47.99x. Square is currently trading at 81.67x, which is double the median and 70% above the group average. In addition, StoneCo, which expects to grow annual EPS at nearly double Square's growth rate for FY-2020 (43% vs. 22%), is trading at only 53.6x. This is quite a large discrepancy, and I believe that this valuation disconnect is what has weighed on Square. This chart suggests that despite Square's 30% drop from its highs, it remains overvalued. While funds may be seeing something different to dictate their positioning, they certainly have not warmed up to the stock on this dip. In fact, we saw the first material quarterly drop in fund ownership in Q3.

If we take a look at the chart below, we can see that fund ownership in Square has been trending higher for over two years, but we saw the first drop last quarter. Fund ownership dropped from its highs of 1160 funds down to 1100, or roughly a 4% drop, but this was during a quarter when the share price pulled back significantly. This is a significant change of character from what we saw in Q4 2017 and Q4 2018, when Square underwent sharp correction in its share price. During these two periods, fund ownership jumped by 13% and 8% sequentially, which showed that funds were buying into weakness. The fact that this recent correction was met with selling suggests that either funds didn't care to add the stock into weakness or that they were taking advantage of strength to ring the register. The Q4 filings will be important to watch, as they will help to clarify if the Q3 2019 drop was an anomaly. Regardless, we've seen a minor change of character with funds no longer buying the dip as they did previously. 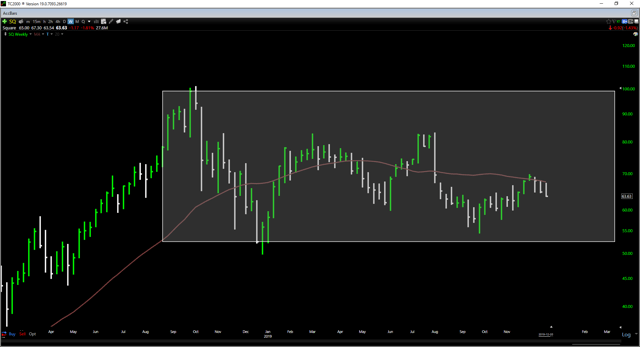 As the above weekly chart shows, Square is stuck in a broad range but continues to make lower highs. This is not impressive in the slightest, given the fact that the Mobile Payments group has been making higher highs all year. In addition, the stock is having a tougher time holding on to its 40-week moving average (brown line), which used to be supported from 2016 through 2018.

From a relative strength standpoint, it's also made little sense to hold the stock or to expect this trend to change overnight. If we look at the below chart of Square compared to the Mobile Payments group, we can see that this ratio continues to trend lower, suggesting that Square is significantly underperforming. Therefore, if one wants exposure to the sector, it would make sense to hold the payment juggernauts Visa and Mastercard or the Mobile Payments ETF itself.

Based on the fact that Square is expensive compared to its peers and funds are no longer as eager to support the stock, I see the stock as a Sell into further strength. While a rally back to the $75.00-80.00 level is possible next year, I would view this as a profit-taking opportunity. The only way I see Square reverting to leading its industry group is if it can put up annual EPS of $1.05 or higher for FY-2020. Given the flat-to-down revenue growth rate over the past year, beating estimates will be more difficult without sales surprises in the company's back pocket. For those looking for exposure to the Mobile Payments group, the group itself continues to seem like the better option versus Square.