Cheap stocks continue to be the land of opportunity for aggressive investors.We END_OF_DOCUMENT_TOKEN_TO_BE_REPLACED

With the majority of corporations having reported, Standard & Poor's is estimating profits will be $155.56 per share for the full year. Some believe that when the earnings season is complete, profits will be at about $160 per share. At any rate, the $155 represents a 20% increase from 2017, reflecting strong economic growth and the impact of the 2018 tax cut. It is estimated that the tax cut boosted the bottom line by seven to ten percentage points in 2018.

It should be noted that the direct impact of the tax cut on profits is not the only impact. Some corporations have been using the additional cash received from the tax cut to buy back shares, which reduces the number of shares outstanding, thereby increasing the company's earnings per share. S&P 500 (SPY) net after-tax operating earnings exclude the effect of such items as mergers & acquisitions, financing, layoffs, and unusual items. So, theoretically at least, operating earnings would be more closely related to macroeconomic variables than would reported earnings. Tax law changes and reductions in the number of shares outstanding are not considered extraordinary or unusual items.

Since our last profits update dated September 20, 2017, we have re-estimated our models with additional data. You will recall that we estimate the market multiple and earnings separately and then derive an estimate of the S&P index. For the market multiple, we deploy the rate on the Treasury ten-year and a forward-looking ratio of federal spending to GDP. Both are inversely correlated to the multiple, and the historical fit is shown on Chart I ahead in this article. Chart II shows the historical fit for operating profits which are explained by nominal and real GDP and unit labor cost. The first two variables are directly related to profits, while the latter is inversely related.

Key input variables are shown on Table I. We show two sets of forecasts, the first being Congressional Budget Office (CBO) estimates for 2019 and 2020, and the second set reflects our own biases about the economy and interest rates. CBO projects that federal outlays were 20.6% of GDP in 2017 with further increases in the out years. It shows the ten-year yield rising substantially in 2019 and again in 2020, with growth running at 2.3% and then slower in 2020. Unit labor cost is assumed to remain tame over the forecast period. Running these assumptions through our models shows a rising multiple this year and declining slightly next - about a 6% rise in profits this year and then flat earnings in 2020. These would place the S&P index at 3044 this year and then a further rise in 2020.

We do not take issue with CBO estimates for labor cost or the spending GDP ratio. However, we think growth will be slower than assumed by CBO this year and then faster in 2020. We think growth will be sluggish in this year's first half and then speed up in the second half and continue in 2020. Our assumption is that interest rates will be much tamer in both 2019 and 2020 than assumed by CBO. We expect the Federal Reserve to hold rates steady, if not lower them, this year, and then perhaps make a mild upward adjustment next year as inflation remains tame. Using our assumptions, profits are somewhat weaker this year and the multiple is higher than forecast with CBO assumptions. Putting our estimates together, we estimate slightly higher than 3000 for the S&P index this year. Next year, we show the index rising to 3140 as growth and profits pick up while the multiple falls somewhat.

Some caveats are in order. First, CBO must assume that future federal spending will be constrained by provisions of current law. This is probably unrealistic, especially since sequester rules will significantly constrain discretionary spending programs after 2019. A more reasonable assumption might be that these will rise with inflation, and this may be overly optimistic. Nevertheless, this issue will be contentious in the period ahead, as the Trump administration is set to offer a budget blueprint in the month ahead that will propose substantial cuts to discretionary spending programs.

A second caveat pertains to the tax cut. Tax rates will remain as is in both 2019 and 2020, thus continuing as a support for profits. However, macroeconomic models based on GDP and labor cost cannot capture the full effect of tax cuts except as they affect economic growth. So, upon reestimating our profits model, we found that it underestimated earnings per share in 2018. Indeed, the model's prediction of S&P earnings for 2018 was 11.35% lower than the actual preliminary value of $155.56. This is within the range of analyst estimates of the effect of the tax cut on earnings.

The tax cut and likely additional share buybacks reducing the number of shares outstanding will impact earnings per share in 2019 and 2020. Thus, in Table I, we adjusted our earnings estimates by the value of the 2018 error. With respect to the market multiple, the sharp December 2018 decline in the equity market contributed to a lower market multiple than estimated by our model by reducing the numerator in the P/E ratio, as possibly the sharp upswing in the S&P earnings per share did as well by increasing the denominator in the P/E ratio.

A third caveat relates to the degree that tariffs might affect profits. For 2018, the impact was insignificant because tariffs on Chinese imports and imported steel and aluminum became effective late in the year and were applied selectively. For 2019 and 2020, the impact is very fluid. On a positive note, the administration is said to be working toward eliminating steel and aluminum tariffs, and the administration is postponing additional tariffs on Chinese imports pending the outcome of ongoing trade negotiations. If these ring true, model estimates for 2019 and 2020 would stand.

But the negative alternative is that trade negotiations break down and tariffs are not only increased but expended to a broader range of products. Added to this is the new wrinkle of possible tariffs on imported motor vehicles and automotive products that the administration is considering. These could theoretically become effective by mid-year. It is impossible to assess the likelihood of such actions, although we would place the odds at less than 50%. Though, there is at least some probability of a negative outcome, and we think this would be reflected in a lower market multiple than predicted by any model.

If in the worst case the administration actually went ahead and raised tariffs and broadened its coverage, while simultaneously enacting auto-related import tariffs, the macro effect would be higher inflation and weaker economic growth. We suspect such an outcome would eliminate the prospect of any rise in profits in 2019 and 2020, while simultaneously reducing the multiple. Uncertainty could ensue as firms impacted by additional tariffs and their lobbyists scurry to use political influence to garner individual tariff exemptions. Let's hope sanity prevails in this increasingly insane world. 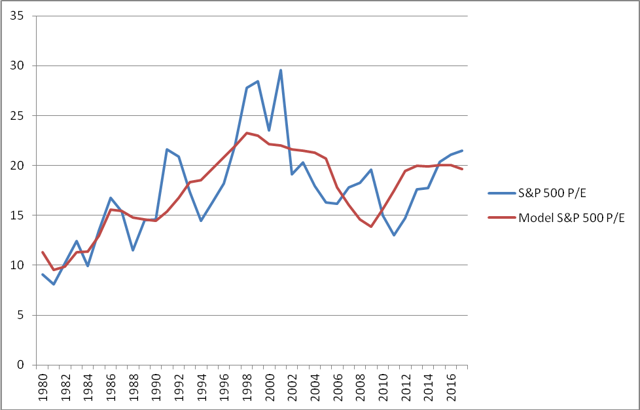 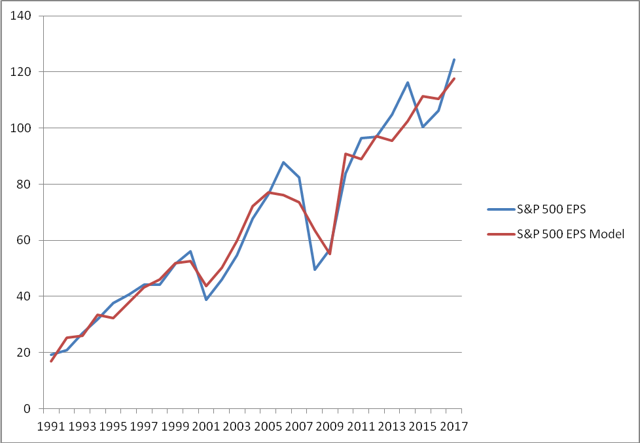