The Nasdaq tumbled 2.6% Monday and was down big early Tuesday, before END_OF_DOCUMENT_TOKEN_TO_BE_REPLACED

Tech wrecks are common. Apple (NASDAQ:AAPL) stock is no exception.We had one END_OF_DOCUMENT_TOKEN_TO_BE_REPLACED

Should You Worry About The Biden Administration’s Proposed Tax Increase?

This earnings season has been stunning so far, with many companies beating analysts’ earnings expectations.

Even better, liquidity in the sorts of fundamentally superior stocks I recommend has exploded to the upside.

However, the party fizzled Thursday a bit when the Biden administration proposed to nearly double taxes on long-term capital gains to 39.6% from the 20% current rate.

Now, I want you to know that these tax increases are proposed, nothing more. They won’t go through, and here’s why…

For starters, Senator Joe Manchin of West Virginia. He is the most powerful man in Congress right now and stands in the middle of many contention issues wielding a tie-breaking vote. Senator Manchin has already shot down proposals to increase the corporate tax rate to 28% from 21%, asking for a 25% rate instead. I think Manchin will also knock down this plan to raise capital gains taxes.

See, many on the left are already upset with the Biden administration for not raising the state and local tax (SALT) deduction, which allows taxpayers in high tax states to deduct local tax payments on their federal tax returns.

In other words, there’s already tremendous political infighting in Congress regarding taxes.

Also, it is imperative that dividend and long-term capital gains tax rates remain the same. Currently, the reason dividend income taxes are capped at 20% is because they are also already taxed at the corporate level. What this proposal represents is a second wave of taxation. The increase would bring taxation on capital gains to over 60%, before adding in state taxes.

And if long-term capital gains taxes went to 39.6%, while dividend taxes remained capped at 20%, what would happen is Corporate America would stop selling their stocks and just pay bigger dividends.

The bottom line: this tax proposal isn’t going through, folks.

Money on the Sidelines

In fact, I think the market will rebound quickly for several reasons. One is the stunning earnings announcement season underway.

According to FactSet, as of last Friday 9% of S&P 500 companies have released results from the latest quarter so far and of these companies, 81% have topped analysts’ earnings estimates. The average earnings surprise so far is a whopping 30.3%.

There’s also a lot of great economic news out there. I wrote about some of the highlights on Thursday.

And even though the rollout of COVID-19 vaccines is the strongest economic stimulus you could hope for, another factor that has me incredibly bullish is the sheer amount of money sitting on the sidelines right now.

I think most people are failing to realize just how much money and economic stimulus is just sitting there idling, waiting to be spent.

Specifically, there’s nearly $5 trillion sitting on the sidelines. To put that into perspective, $5 trillion is roughly 25% of the entire annual GDP of the United States.

We’ve never seen anything like this in our lives.

And according to the FDIC, which is responsible for insuring our checking and savings accounts, more than $2 trillion has been stockpiled into individual accounts at U.S. banks.

This stockpile grew in part from people selling stocks last year when the market crashed. But it also came from trillions of dollars in stimulus money getting pumped into the economy.

Another thing worth pointing out is that all this stimulus has sent the money supply to historic levels. Check out this chart showing the current level of money supply in the US. 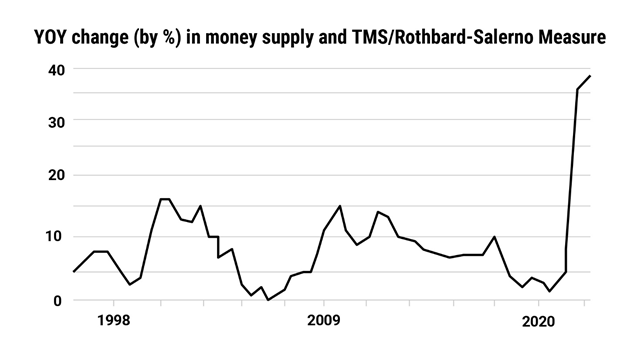 The money supply is a broad metric used to determine how much money is available at any given point. Checking accounts, savings accounts and the net worth of individuals are at all-time highs.

Personal income surged 10% in January, and this is obviously before President Biden passed an additional round of stimulus checks. In other words, it shows the purchasing power of American businesses and consumers.

Stock prices tend to move higher when the money supply is high, and it’s never been this high before. As you can see in this chart above, there’s a lot of pent-up stimulus and economic activity just waiting to be unleashed.

And without being able to go out and spend all this newfound money at restaurants and on vacations, people have turned to the markets.

Charles Schwab announced in February that the number of new brokerage accounts being opened was three times more than the previous year.

And a recent online survey from Deutsche Bank showed that nearly 50% of respondents said they plan on spending at least half of their stimulus money on stocks.