Alphabet shares just last week made new highs, at near $1,323. But they've been under pressure since, even as the Nasdaq touched records on Tuesday.

While Alphabet stock might simply be losing some steam after a big run, reports, particularly investigations of its health-care-data partnership Project Nightingale, shouldn't help matters.

With the latest news, Alphabet again finds itself surrounded by data-privacy issues. This oftentimes leads regulators -- particularly those in Europe -- to fine the Mountain View, Calif., tech giant, and it could be another black eye as U.S. regulators do their own antitrust inquiries into Google's actions.

Among the FAANG stocks under the antitrust microscope are Amazon, Facebook, and Apple. Given the developments, Alphabet was picked as Real Money's Stock of the Day.

Do the latest reports make Alphabet stock a sell? Let's look at the charts. 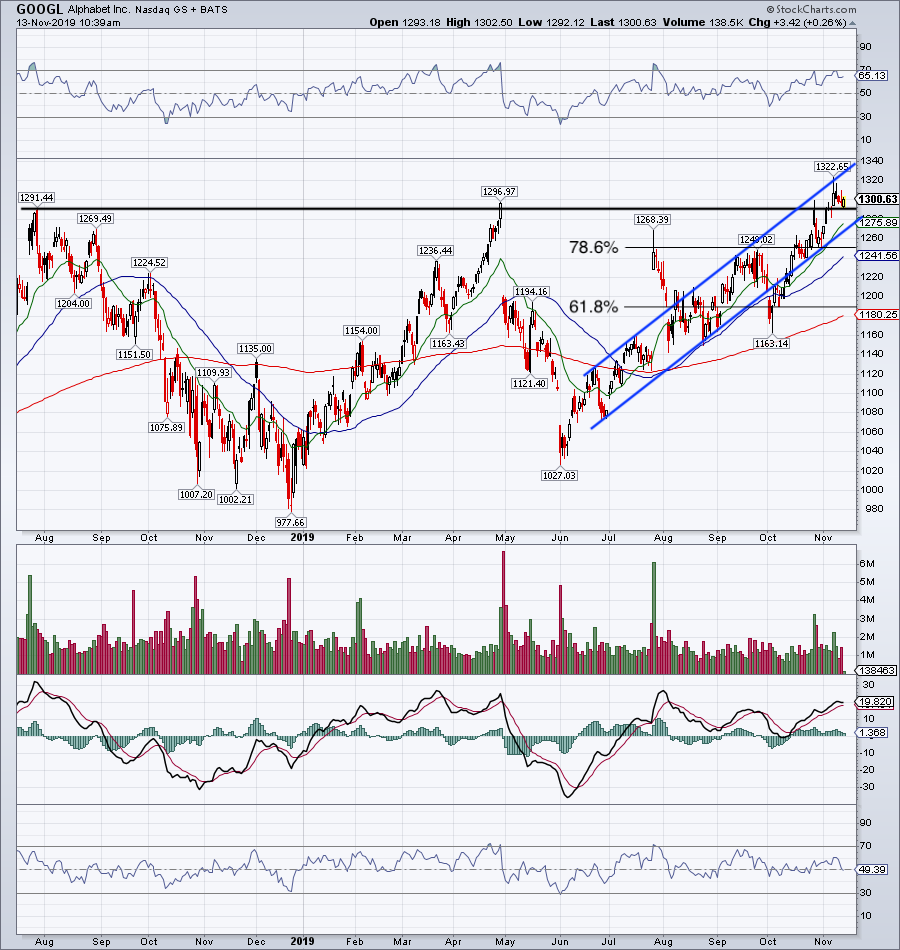 The zoomed-out daily chart above highlights the previous 16 months of action in Google stock. Investors will quickly see what a notable role the $1,290 to $1,296 area has played in that time.

In July 2018 and April 2019, this area twice rejected GOOGL shares, sending the stock below $1,030. That marked corrections of at least 20%, a notable decline for what many consider a blue-chip technology stock with a rock-solid balance sheet.

In any regard, Alphabet stock holding the $1,290 to $1,300 area as support would be the ideal scenario for bulls at this point.

The shares continue to trade in a channel that's been in play since the summer (blue lines). Should $1,290 give way, GOOGL stock could decline to the 20-day moving average and channel support near $1,275. Below that and the 78.6% retracement and rising 50-day moving average are the next downside targets.

Remember: Google stock has proved that it can embark on deep declines. That said, if former resistance holds as support, the shares can rally. If Alphabet takes out its prior highs near $1,322, then a push to channel resistance could be in the cards.

So is Google stock a sell on this news? No, at least not yet. It's not good news and the report could lead to bearish developments later. But so far the price action sides with the bulls. Below $1,290, though, that tone shifts more cautious.