There’s a great debate over the fundamental thesis on Roku (NASDAQ:ROKU). I’ve had dozens of in-depth conversations with dedicated fans and it is clear that their resolve is strong. This is the good news for the bulls because it makes for a good stock to catch on corrections — and it just had one. Long-term investors have no reason to doubt its failure now. The streaming content thesis has life for years to come, so it’s too early in the process to squash the ROKU stock trade now.

The reaction to the earnings report was negative and it resulted in an 11% dip, which is an official correction by Wall Street standards. This sounds big, but keep in mind that Roku is a momentum stock, so it’s not that unusual nor is it a big deal.

Besides, it has fallen into short-term support, therefore this does not change the fact that the buyers are still in control. The important thing for holders is to know if they are investors or traders of Roku stock. This will make the difference between deciding if this is a good time to buy or sell.

Buying a 10% dip for long-term investors makes a lot of sense. But for the short-term trader it might be a different story.

Falling into Support Makes for a Better Buy Than Sell Idea 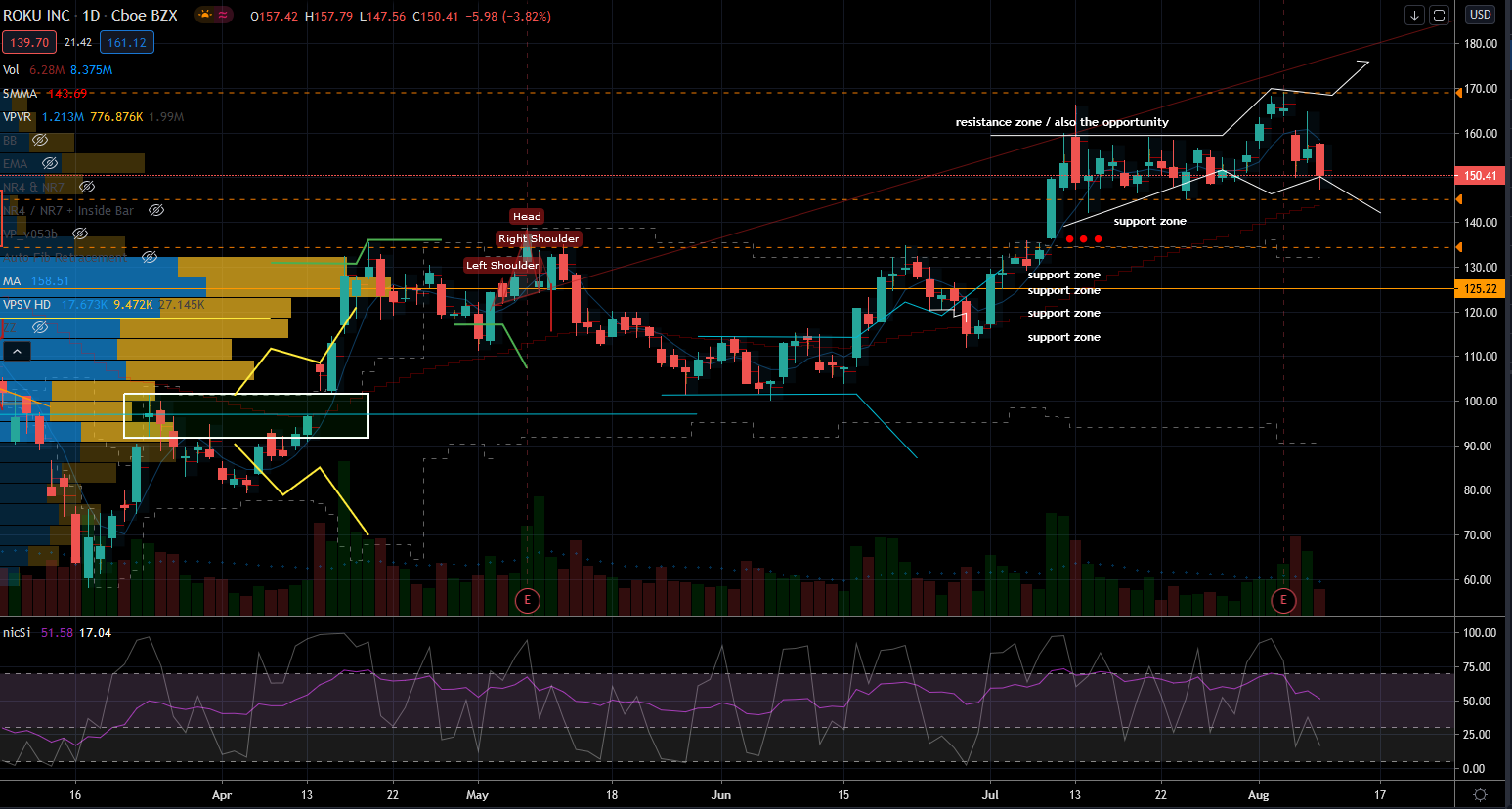 The current chart shows that there is reason to expect the $145 per share zone will hold. Else it is entirely possible to revisit $136. But before you have a fit over it, know that it would make for an excellent entry point there too.

Roku stock broke out in force from $136 in July and the rally was 25%. When this happens, it is okay for a stock to give back half of its gains in order to build a better base. Otherwise the chart becomes too vulnerable to serious crashes without warning.

In other words, pullbacks in a powerful move like the one that Roku had are healthy. They serve the purpose of shaking out the weaker hands so that the stock ownership transfers into more convicted buyers, and another leg higher can start.

For the same reasons, shorting Roku down here is risky because it is falling into prior pivot zones. On the way down those more often than not provide support. In this case there are several lines of support so the whole zone below current levels favors the bulls.

There’s More to the Story Than Fundamentals

There are outside factors, mainly from the politicians that are playing hot potato with Americans’ financial well-being. They are squabbling over the size of the next unemployment stimulus, so stocks are hostage to this set of headlines until further notice.

If they fail to reach a deal, then there is added risk to Roku stock. In which case then it could fall back into the clutches of $110 per share. Although this is not my forecast, this would be a place I would go long with conviction.

Then there is the Covid-19 issue, which is a catalyst for equity prices until we get an official vaccine. Just this morning, Russia announced it had approved the first vaccine and that President Putin’s own daughter had taken it. U.S. experts are leery of the headline because it sounds more in line with our trial phases, so it’s a matter of standards, not new success. Nevertheless, the stock market likes it for now.

Check Emotions at the Door

Stocks like this are emotional and people tend to get hurt by their own actions. It is very important to set emotions aside when trading ROKU. I am interested in knowing where the short-term risk lies for the next three months, so this makes me a trader more so than an investor.

Three months ago I wrote about management needing to tell a positive story from the quarantine benefits, but they didn’t. Consequently the stock fell 25% after the earnings report back then. That dip was an indeed an opportunity to buy because what followed was an even bigger 60% rally.

This is proof positive that investors should not fear dips. Letting the stock come into better base zones is a viable and relatively safe way to trade a momentum stock like Roku.

I do have a general concern over its fundamentals, but I also realize that it’s debatable, so I’m not emphatic about it. Streaming stocks are doing very well but it’s not so obvious with this one. Eventually management will have to clearly show us why it too deserves a 16 price-to-sales valuation.

For absolute comparisons this is almost 40% more expensive than Netflix (NASDAQ:NFLX), and at least three times more than Amazon (NASDAQ:AMZN) and Disney (NYSE:DIS). I know that none of these stocks are perfect comparables but they are growth stocks like Roku.

There are problems but also opportunities, so it is up to management from here. I am not looking for profitability, but I do want to see growth aside from just user metrics. It would be nice to see an explosion in cash-flow-from-operations as Tesla (NASDAQ:TSLA) did in under a year. Meanwhile, there is definitely no reason to panic now and there could be better days ahead.