Big banks will start releasing their quarterly numbers this week. The outlook END_OF_DOCUMENT_TOKEN_TO_BE_REPLACED

"Men, it has been well said, think in herds; it will be END_OF_DOCUMENT_TOKEN_TO_BE_REPLACED

After consultation with my Generals and military experts, please be advised that the United States Government will not accept or allow……

….Transgender individuals to serve in any capacity in the U.S. Military. Our military must be focused on decisive and overwhelming…..

….victory and cannot be burdened with the tremendous medical costs and disruption that transgender in the military would entail. Thank you

The AP reports that The Pentagon will allow transgender individuals to enlist in the military as of Jan. 1.

What rough estimates there are suggest that transgender people are overrepresented in the military. Perhaps dramatically so.

The most prominent of these estimates comes from the Williams Institute, an LGBT-focused think tank based out of UCLA. In a report from 2014, authors Gary Gates and Jody Herman estimate that approximately 15,500 transgender men and women are serving and that an additional 134,300 trans Americans are veterans. Given a national population of 700,000 (another rough estimate), this suggests that over 1-in-5 (or 21.4%) of all openly transgender Americans are in the military or have served at one point.

As we noted previously, Transgender Americans, in other words, are estimated to be twice as likely to join the military. 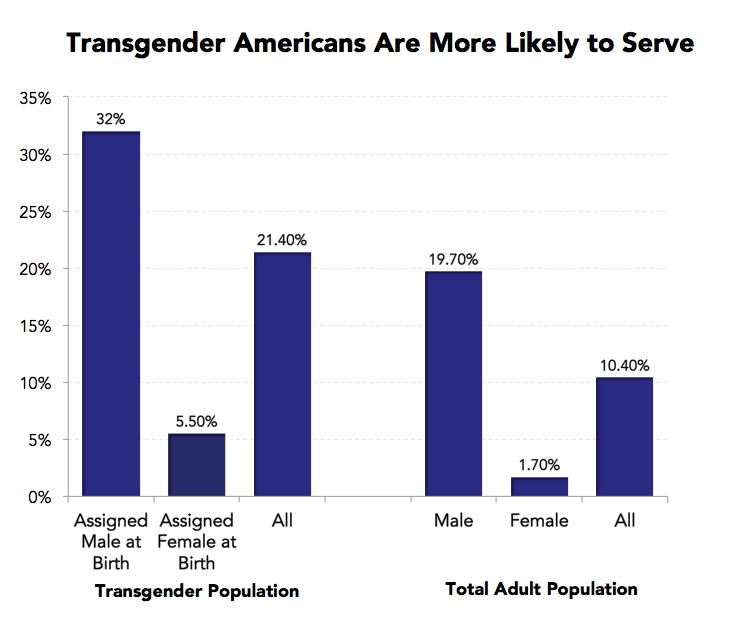 And it appears it will continue to be as AP reports, the Pentagon official tells The Associated Press that transgender people can enlist in the military beginning Jan. 1, despite President Donald Trump’s opposition.

The new policy reflects growing legal pressure on the issue and the difficult hurdles the federal government would have to cross to enforce Trump’s demand to ban transgender individuals from the military. Two federal courts already have ruled against the ban.

Potential transgender recruits will have to overcome a lengthy and strict set of physical, medical and mental conditions that make it possible, though difficult, for them to join the armed services.

Maj. David Eastburn says the enlistment of transgender recruits will start Jan. 1 and go on amid the legal battles. The Department of Defense also is studying the issue.

As a reminder, the US military is the largest employer of transgender people.