Pause, Before You Hit That Sell Button

Many stocks have run hard over these last couple of months. Memories tend to be short and it's hard to believe the magnitude of the run since the low points in mid-March. While the S&P (SPY) is up almost 36% in this time, in the high quality, secular growth area of the market that I'm invested in, certain stocks have run much harder and are up well in excess of that. I'm fortunate to have a few names amongst my own holdings that have appreciated extremely strongly over the last few months including MercadoLibre (MELI), The Trade Desk (TTD), Coupa Software (COUP), Alteryx (AYX), Twilio (TWLO) and Zscaler (ZS), all of which are up more than 50% year to date, compared to the S&P 500 which is still down 6% in this time period. 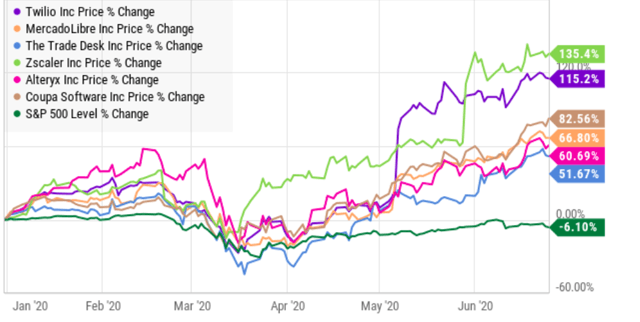 Most of these names are significant beneficiaries of an acceleration in their business due to the coronavirus and some have nearly doubled from the market lows in mid-March. Up until this point, I've mostly refrained from cashing in any of the chips on the various holdings that I own. That said, there are a number of common fears that are held about some of the large winners and hypothesized reasons to why one should now cash in.

As quarantines come to an end and as cities emerge from lockdown, there is a noticeable upswing of cases in places like California and Florida. In fact, the WHO is warning against general complacency, with strong expectations of a second wave of cases likely to hit North America later in the fall. No doubt, a wave of further cases will set off alarm bells in stock markets and create fears of a more severe recession and the likelihood that we may once again revisit the March lows or plunge even further below.

I think this fear is dramatically overstated. We are unlikely to have an extended shutdown, with neither the political appetite globally to do this, nor it seems, the patience of the general global community to tolerate this. Additionally, if there's one thing that the Federal Reserve has been consistent with its messaging, it is that it has scope to continue with flexible monetary policy. This will include all the necessary bond-buying to ensure constant liquidity in the markets, which the Fed has been doing, to the tune of $40B per day. 'Don't fight the Fed' is a mantra that has been consistent since the Global Financial Crisis in 2008, putting a floor under markets and I see no reason for that to change anytime soon. 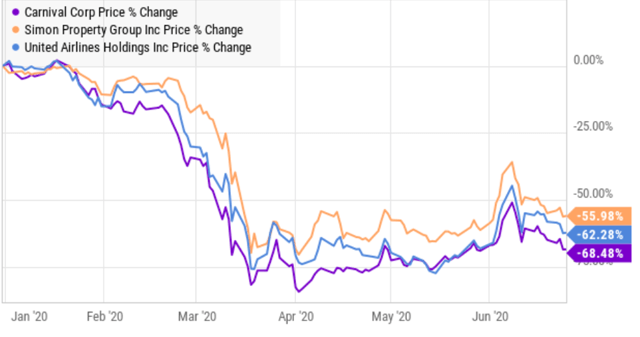 While some of these are good businesses, it's still far too early to judge exactly how deep changes in consumer and enterprise behavior will be and to what extent demand will snap back to pre-crisis levels. There will be enduring memories in consumers' minds about cruise ships stranded in the middle of the ocean and unable to dock, and nervousness about having to get temperature checks in public places. This may ultimately impact the level of long-term demand for many businesses and services. 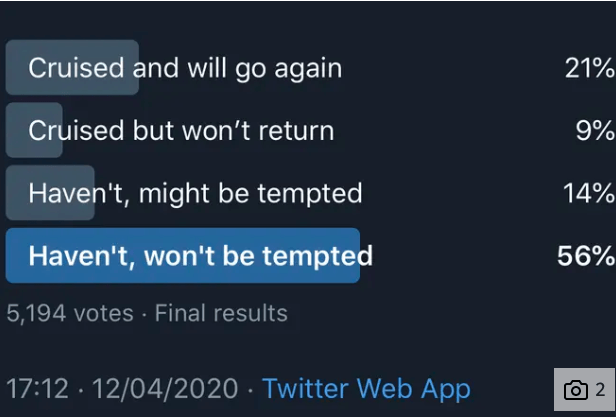 Thus even if demand picks up, which surely it will for many of these so-called 'deep value' businesses, there's a question as to whether demand will necessarily return to pre-crisis levels. Investors have a potential reinvestment problem of selling businesses that may appear to be trading expensively but now have improved, permanent economic advantage and deploying capital into businesses which may see long-term diminished business prospects.

Investors also run the risk of selling out companies with strongly growing revenue, improving margins and returns on invested capital for those that may be more cheaply valued but that are experiencing unfavorable economics. It is important to remember that not all businesses are created equally.

Compare a business such as Paycom (PAYC), which is experiencing rising margins and returns on invested capital, to one such as Macy's (M) which is experiencing falling margins and declines on invested capital. While Macy's valuation may be considered an undervalued bargain, there's no question that Paycom has far better business quality and higher long-term durability and stability as a business. 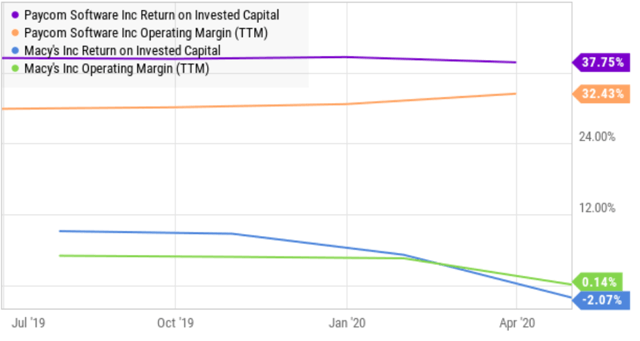 It is entirely possible, and in fact quite likely, that valuation ratios for high growth businesses will decline. In fact, one should expect valuation multiples to decline as growth rates diminish and the law of large number kicks in. However, if a business is able to continue rapidly growing revenue, revenue growth will invariably overcome valuation compression to still produce a really good result.

That's why it's vitally important to pick the right business with secular growth tailwinds that can continue to propel growth for an extended period of time. Competitive advantage in the form of high switching costs that benefit the likes of Twilio and Zscaler or network effects that exist for MercadoLibre or The Trade Desk help preserve that long window of revenue growth.

Consider the case of Facebook (FB), whose price to sales multiple decreased by 50%, yet whose share price more than quadrupled between 2014 and today. The secret to strong returns? Revenue growth of 800% in that time period. If businesses can grow revenue at strong rates for a long enough period, they will outperform, no matter what their valuation multiples do. 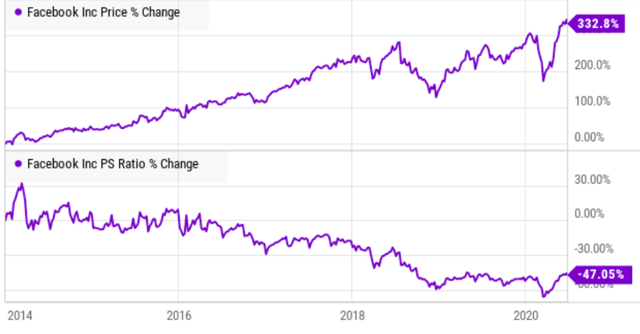 Fear # 4: The stock has hit its limit in terms of its business potential

Traditionally, it was very difficult for industrial or media businesses to expand out of their core market at low cost and limited risk. For industrial businesses selling widgets, this would typically mean a new production line, holding new inventory SKUs and potentially new marketing and distribution relationships. The process was complex, relatively high risk and the potential returns not straightforward to estimate. In the era of the modern cloud-based software platform, 'land and expand' is incrementally easier. Once created, software is relatively simple to distribute, can be easily managed on existing platforms and is often sold to the same buyer within an enterprise. 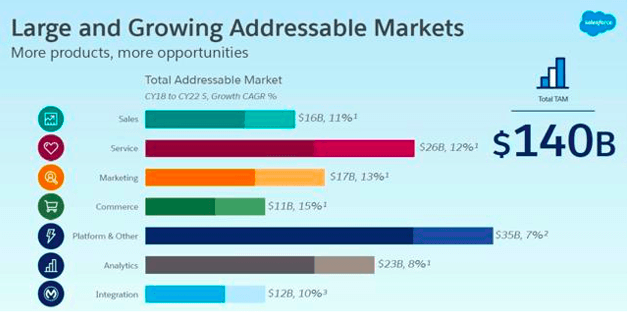 The ease of land and expand for these businesses means that they can easily and effortlessly increase their total addressable market without significant effort and do so at relatively low cost. Thus, the notion of businesses "tapping out" their potential or acquiring too much market share in a segment doesn't really constrain these modern software platforms from continuing to grow and expand.

Fear # 5: This stock has already grown so large, it surely can't continue to grow!

What's been incredibly interesting to see with this rally is that even some of the mega cap software platform businesses have left the S&P 500 in the dust. It's amazing to think that Microsoft (MSFT) and Amazon (AMZN), exclusive members of the $1T club, are up almost 45% year to date, compared to -5% for the S&P 500.

The mental models and frameworks that we typically apply for large market-cap businesses need recalibration in the era of software platforms. We typically associate rates of low single-digit revenue growth with mega-cap businesses with market capitalizations over $250B. Johnson & Johnson (JNJ) and Walmart (WMT), for example, both have market capitalization over $250B, but have revenue growth rates in the low single-digits. 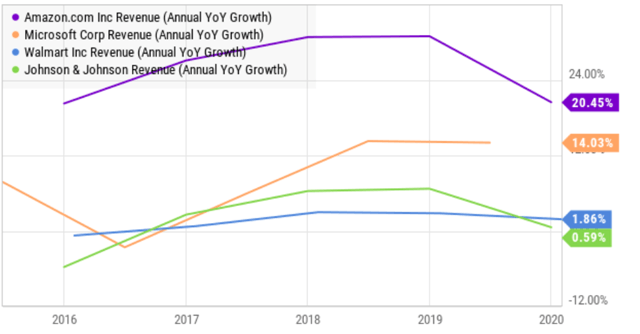 Conversely, Microsoft and Amazon, both businesses over $1T, are still growing revenue in the double-digits. The recalibration that's required with these mental models is that Amazon and Microsoft still only have very small percentages of their overall market segments which are growing quite rapidly. Amazon, while having 45% of US e-commerce market share, is still less than 10% of total US retail spend. Similarly, Microsoft's intelligent cloud business which is powering its growth, is still only $12B in quarterly revenue, a small fraction of the $3.8T in IT services spend, which consists primarily of on-premises deployments. Both benefit from secular forces which are propelling spending and market share to them.

The large-cap platform businesses are all growing at a rate of revenue growth in the double-digits, yet still have massive addressable markets to go after, which can and will mean that their stock prices continue to increase.

Fear No 6: This business has now grown to a large part of my portfolio, I need to diversify!

The rapid appreciation of certain high-quality stocks may mean that investor portfolios have a disproportionately high weighting toward some of these businesses. Modern portfolio theory suggests that one should naturally look to reduce concentration and size of individual exposures and re-deploy the capital in other positions.

An interesting study by Hendrik Bessembinder of ASU suggested that 4% of all of the stocks listed on the stock market accounted for equity markets outperforming bond markets over many years. Further, 58% of stocks failed to beat Treasury bill returns over their lives. By selling higher performing stocks to reallocate capital into other businesses, an investor is consciously making the decision to potential reduced exposure to the businesses in their portfolio that may give them the best chance of outperforming the market. 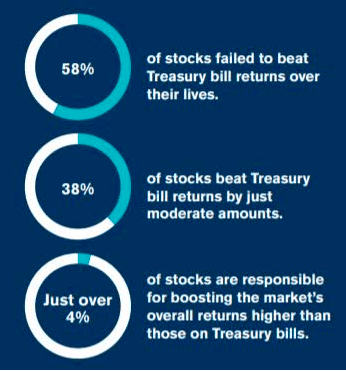 Owners of a high-quality portfolio may be internally conflicted by the rapid share price appreciation of many of the stocks in their portfolios from the lows of just a couple of months ago. It's not easy to turn a blind eye to doubling one's investment capital in a very short space of time. However, taking the time to critically question the possible reasons to sell and refraining from doing so may actually end up generating investors significant returns in the long run.