Last year was probably the toughest in recent history on airline stocks. END_OF_DOCUMENT_TOKEN_TO_BE_REPLACED

GameStop (NYSE:GME) is up 85% over the past month through June 8. END_OF_DOCUMENT_TOKEN_TO_BE_REPLACED

One Trader Is Rethinking European Stocks

It’s tough to get excited about European stocks these days.

Although they had a decent run in 2017, they were still trounced by their American counterparts. 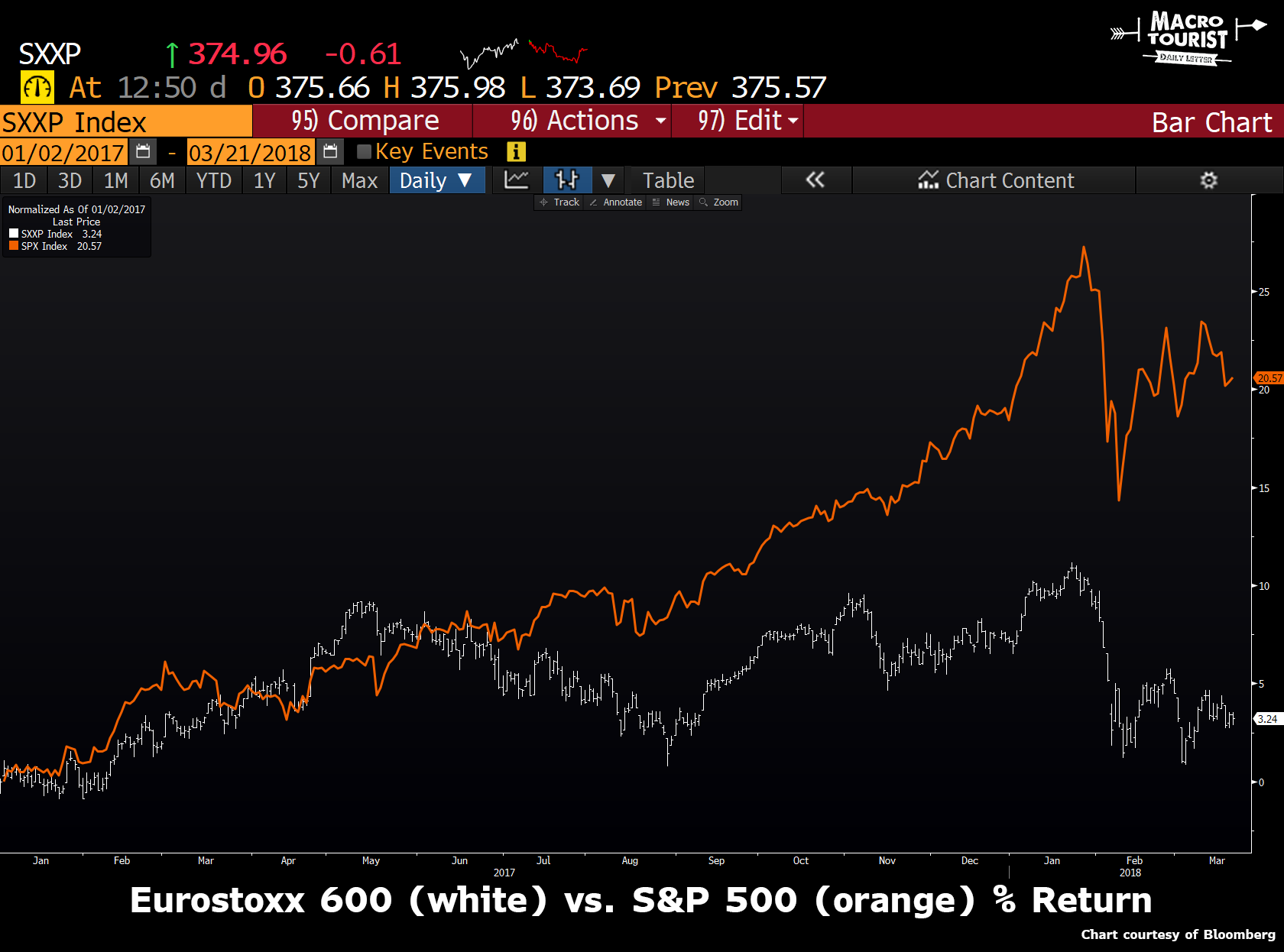 It’s difficult to compete with the Trump tax cut excitement, and let’s face it, a steadily rising Euro is a tough headwind to sail into. 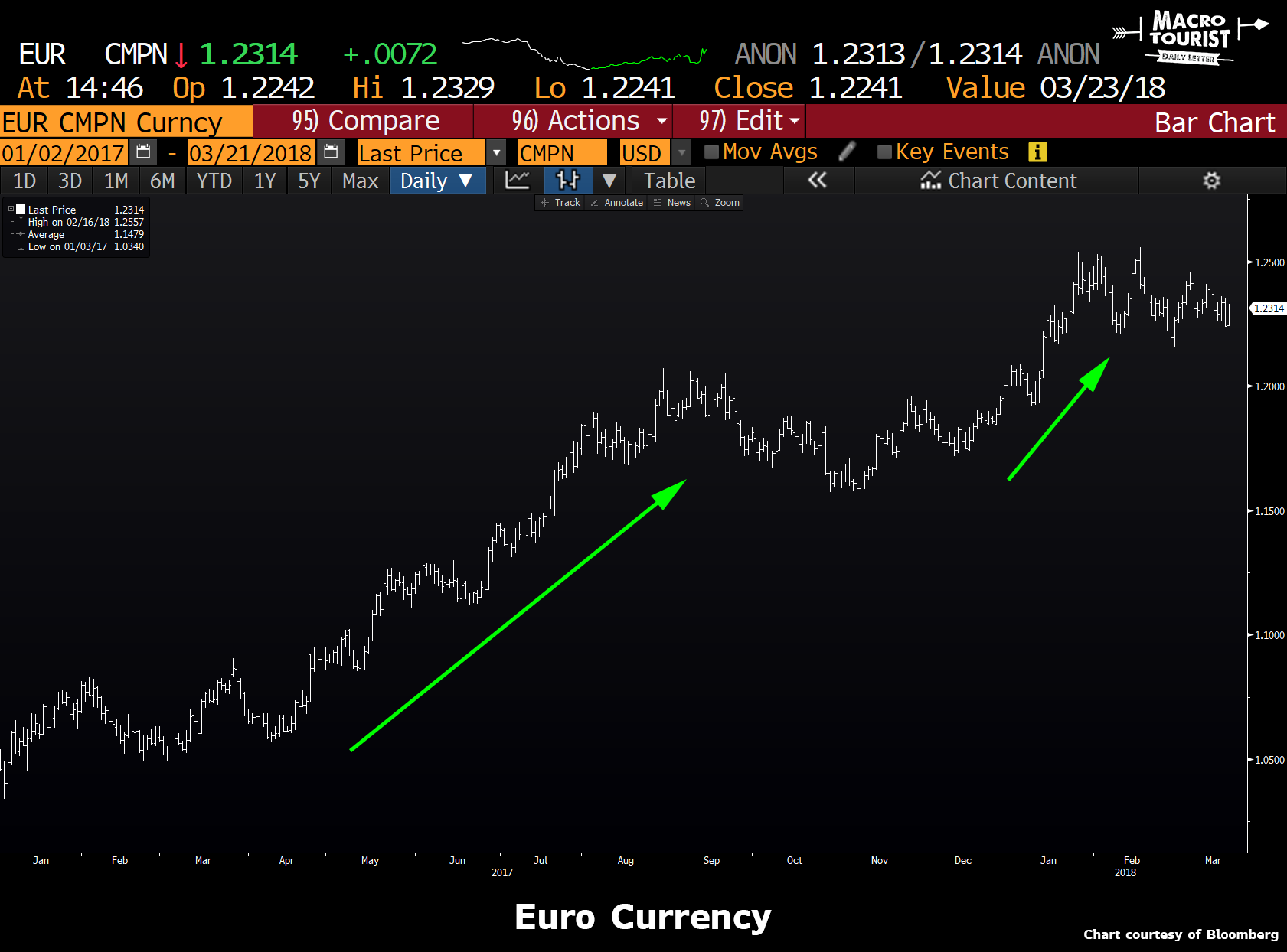 Although there has been all sorts of talk about global synchronized growth, the truth of the matter is that the European economy has been slowly rolling over for the past quarter. Have a look at this chart of the Citibank Eco surprise index of the American economy versus the Eurozone. This indicator measures economic activity versus expectations. As economic numbers are released that beat expectations, the index rises. Conversely, economic numbers that disappoint versus forecasts cause the index to fall. 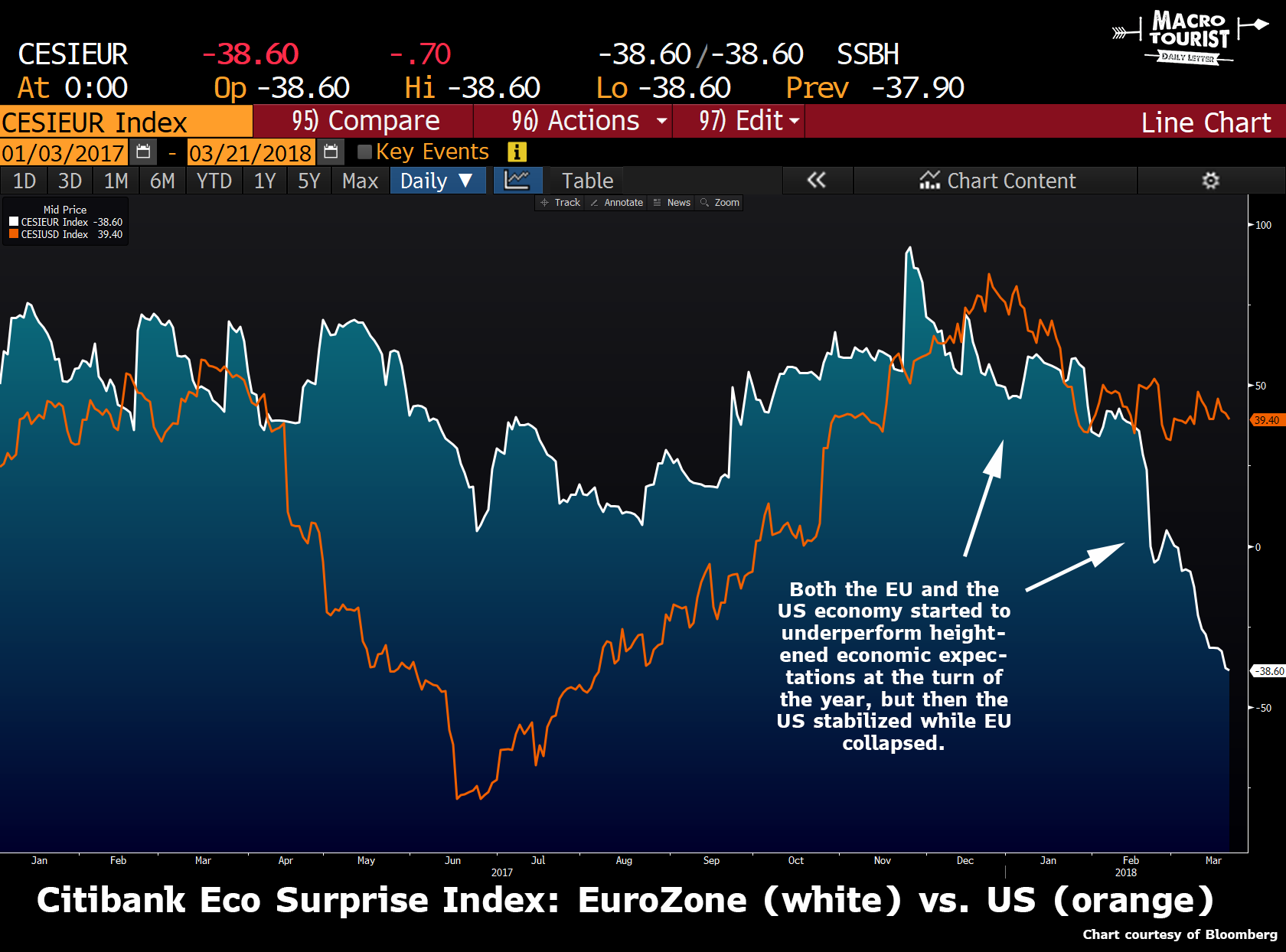 The American economy started to underperform expectations in late December, but has since stabilized. Not so for the European economy. It has deteriorated at an increasing rate.

But is the US stock market outperformance and the Citibank economic indicator truly representative of what is going on in Europe?

I was stunned by a recent chart created by Bloomberg reporter Ksenia Galouchko that showed the EBITDA trend of the S&P 500 versus the EuroStoxx 600 over the past few years. 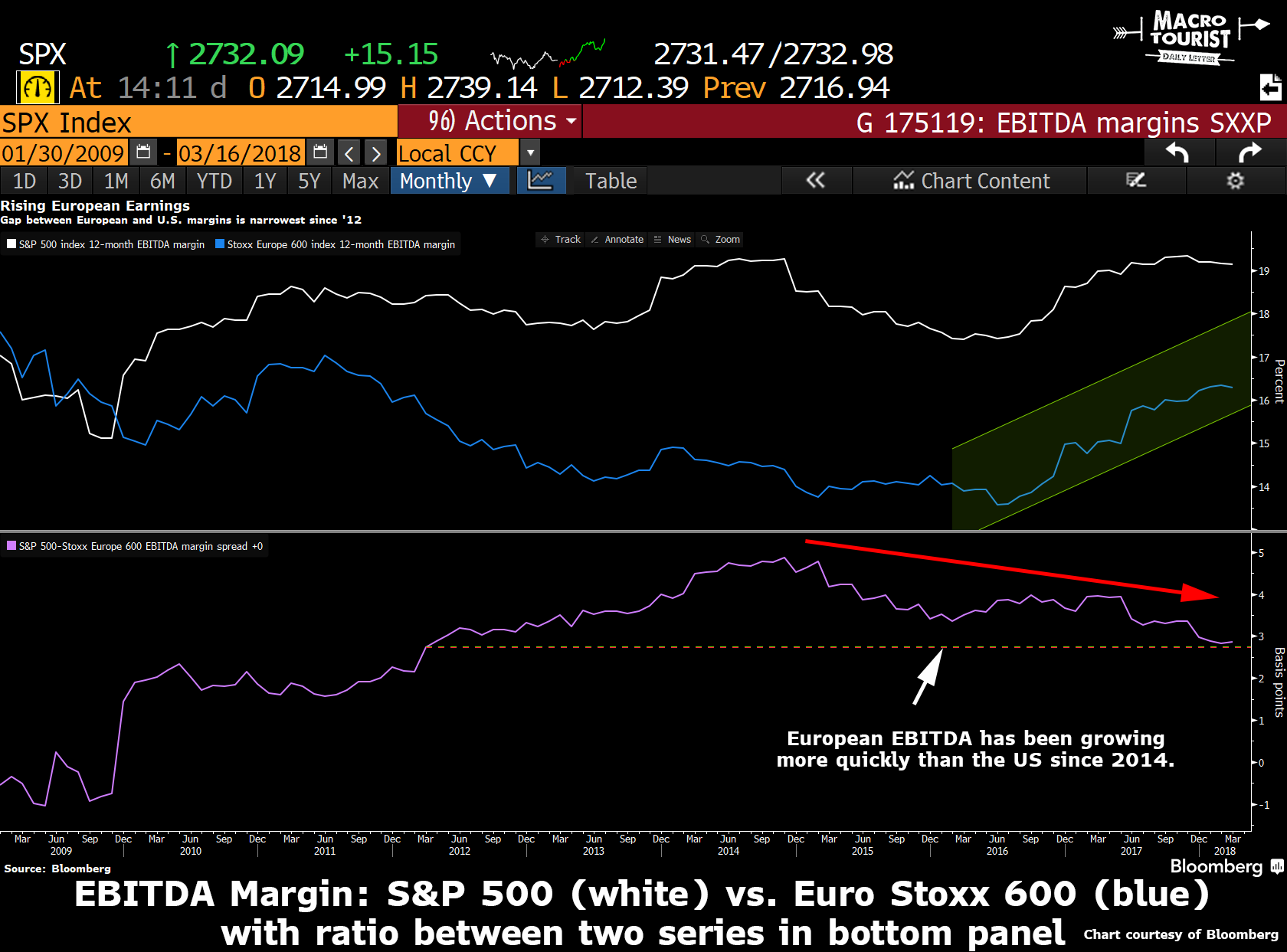 As might be expected, the EBITDA margins for Americans companies have vastly outperformed European ones since the Great Financial Crisis. Both countries’ margins slipped in 2009, but the US quickly rebounded while European companies lagged. I have my theories why this might be, but they are controversial. Europe suffered from an unnecessary economic slump that was the result of excessively tight monetary policies and severely restrictive fiscal programs (don’t forget that Trichet raised rates twice in 2011 only having to quickly retract those hikes as the European economy collapsed and don’t get me started about how tightening fiscal policy works in a balance sheet recession). But arguing about proper policy is useless, the real question is what is happening today and what might that mean for markets.

Have a look at this same chart, except this time I expanded the time line and included the ECB Total Balance sheet series. 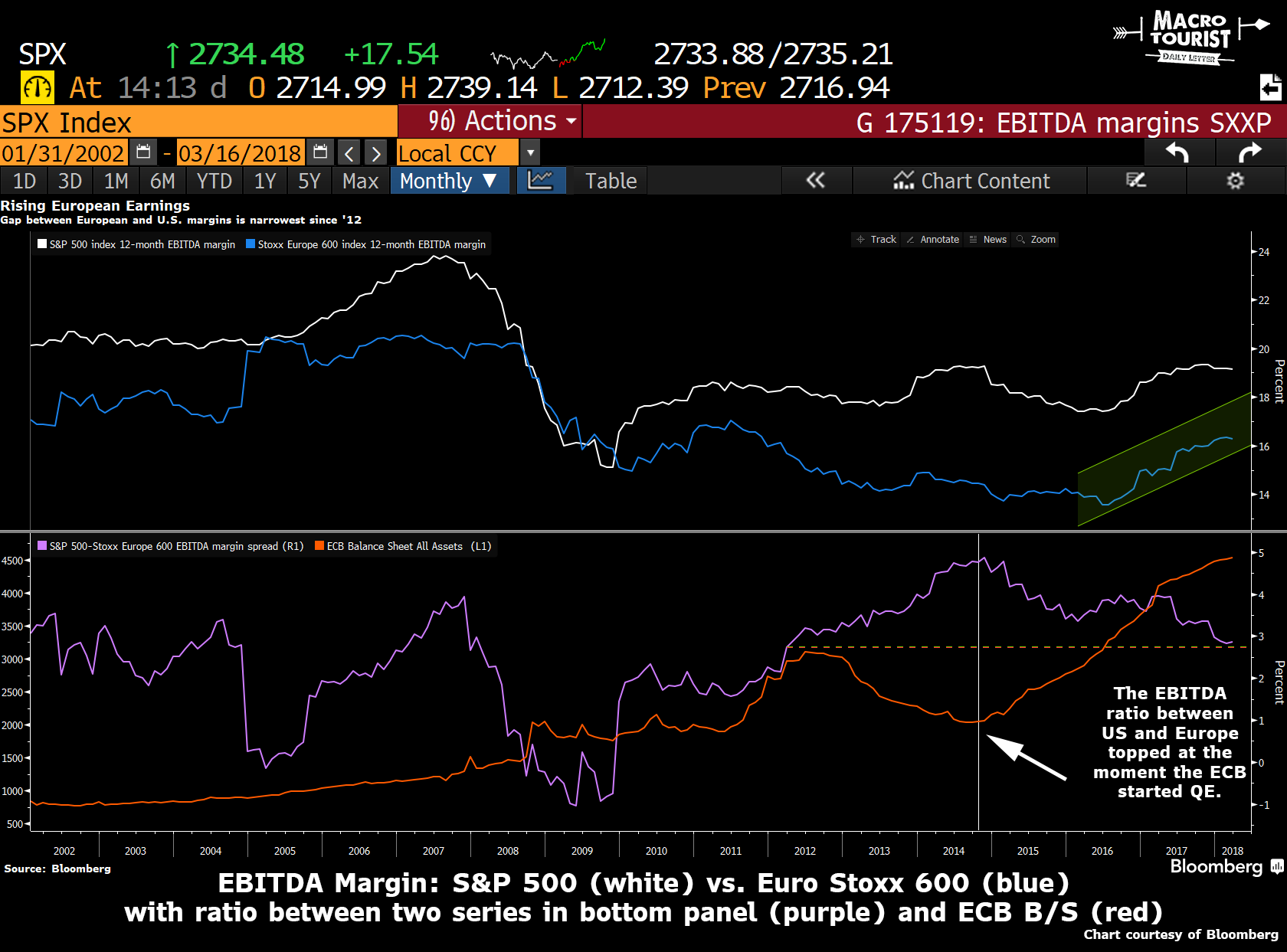 Interestingly, the EBITDA ratio peaked at exactly the moment the ECB started their quantitative easing program. Don’t forget EBITDA is earnings before interest, taxes, deprecation and amortization. Draghi’s monetary subsidy of cheap funding for corporations should not be leaking into this number. Yet it obviously is…

Let’s put it all together. The Euro currency is overbought, over-owned, and overpriced. It has been holding the European stock market down. Even though the Fed is tapering their balance sheet and raising rates while the ECB is still actively engaged in diametrically opposing policies with stunningly large quantitative easing, the market sees only the worst in the US dollar.

It’s obviously not quite this easy, but there can be no denying the Euro rally explains a fair amount of the recent EuroStoxx under performance. 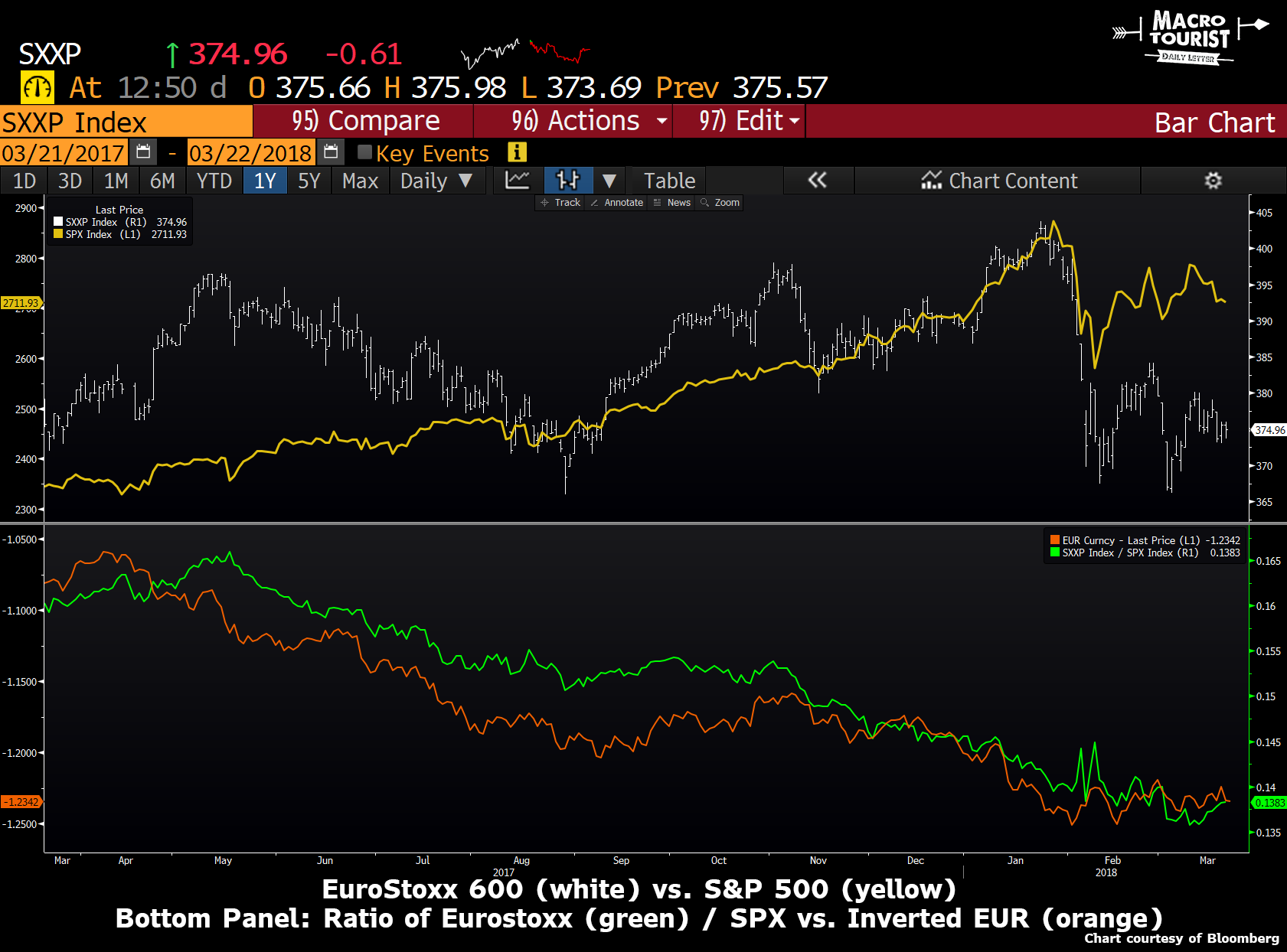 And let’s imagine that someday the US dollar actually rallies. I know – crazy talk! But it can happen. In fact, it was only a year ago that many investors were falling over themselves in US dollar bullishness due to Trump’s stimulative business-friendly policies. Proving once again that prices make opinions (and not the other way round), now that the US dollar price has been declining, these same investors are almost as equally as confident that it will never rise again. Sheesh.

I know owning European equities is not a sexy trade. And I know all the reasons why Europe is a basket case doomed to fail because of the ill-designed union. And don’t bother emailing me with notes about the huge tax burden and stifling socialistic policies. I know all the arguments. But most importantly, so does the market. In fact, the terrible relative performance of European equities has ensured that most of these points are front and centre in investors’ minds.

Yet, look at that EBITDA trend. European company fundamentals have been improving more quickly than the US. And although many investors are worried about Draghi taking his foot off the monetary accelerator, I don’t see it. Even if he does, he will most likely taper sovereign bond buying and leave the corporate quantitative easing in place. Finally, the recent deterioration of the economic news coming out of the EuroZone has decreased the likelihood of a premature tapering.

So, summing up – European corporate EBITDA is growing, monetary quantitative easing will most likely continue, and when the Euro finally takes a breather, European stocks will be ready to resume their march higher. Don’t listen to all the naysayers. Things in Europe are not nearly as bad as they say.