Musk Is Dancing For A Reason

The bear thesis has for years been Tesla's risk of bankruptcy. With $24B worth of liabilities and consistently negative EPS, the bears have been rightfully skeptical about Tesla's ability to service their debt. But to see a negative EPS and proclaim Tesla is careening towards insolvency is downright misguided. We should be analyzing the actual cash flows, i.e. cash from ops, capex, and the resulting free cash flow, to understand whether there is sufficient money with which to service debt and eventually pay shareholders.

But before we dive into the recent cash flow successes for Tesla, let's take a peek into their debt and the various covenants thereof.

This probably explains Musk's recent jubilant attitude, as Tesla's share price sets them free and clear of their "Big Bad Convertible Bonds". I use the phrase because these bonds were never truly threat to Tesla's solvency. For all of 2019, they had 5x the cash needed to pay off the 2021 March bond, which is their nearest obligation. And with four out of the last five quarters producing free cash flow, with which Tesla has been strengthening their balance sheet, there truly wasn't much to be fearful of financially.

With the recent share price explosion, concerns have largely been eliminated. I dug up the prices at which each of their bonds can convert, should the holders decide to convert them, and put them in a chart below. I found these bond terms in the three SEC filings listed below.

You would be dancing too, if you'd just saved your company $4B in debt repayment over the course of the next 4 years. To be sure, Tesla does have near term obligations that mature over the next 4 years, but with $4B of debt to convert to equity, Musk and investors can breathe a sigh of relief. Maybe even do a dance in celebration.

At the present juncture, the risks of bankruptcy are dramatically reduced. But there's still a couple years before two of the three obligations mature, and the Tesla's battle with the bears is far from over.

Should the share price decline below the above conversion rates, Musk will have to access capital markets yet again in order to repay the debt that will mature in the next few years.

Harkening Back To Graham And Dodd

If you've read Security Analysis, then you're very familiar with the ratio known as "Ratio of Earnings to Fixed Charges" or "Times Interest Earned" or "Interest Coverage Ratio". This ratio was essential to any analysis Graham and Dodd did during their years as money managers, and they related as much in the books they wrote. Today, however, is a different story for the once beloved ratio.

The measure has fallen out of favor in recent decades, as it has become unnecessary in part due to the fact that a majority of companies no longer have massive industrial and manufacturing components with enormous fixed charges. However, in the age of Graham and Dodd, many of the best investments were entities such as railroads, whose interest coverage ratio was of great importance.

Interestingly, while Tesla is considered high tech and advanced by their disciples, the company cannot escape the rather basic financial analysis that Graham and Dodd would have applied over 80 years ago.

So here's the formula before we plug Tesla's quarterly numbers into it:

In four out of Tesla's last five quarters, their interest coverage ratio was an average of 4.41, a ratio more than acceptable for investment by the likes of Graham and Dodd. Obviously, the narrative doesn't stop there. Next we will apply a Buffett technique to arrive at whether the current valuation supplies to us a sufficient margin of safety.

At this point, we've thoroughly demonstrated that Tesla can service their debt, and the company has no major debt obligations maturing in the next 4 years, at least while their share price remains in the $400s.

With a company that's no longer facing a cash crunch, what value should we assign to its future cash flows?

And, as I've mentioned, Tesla does have cash flows, despite persistent negative EPS due to low EBITDA relative to depreciation. In four of the last five quarters, Tesla has generated real free cash flow. 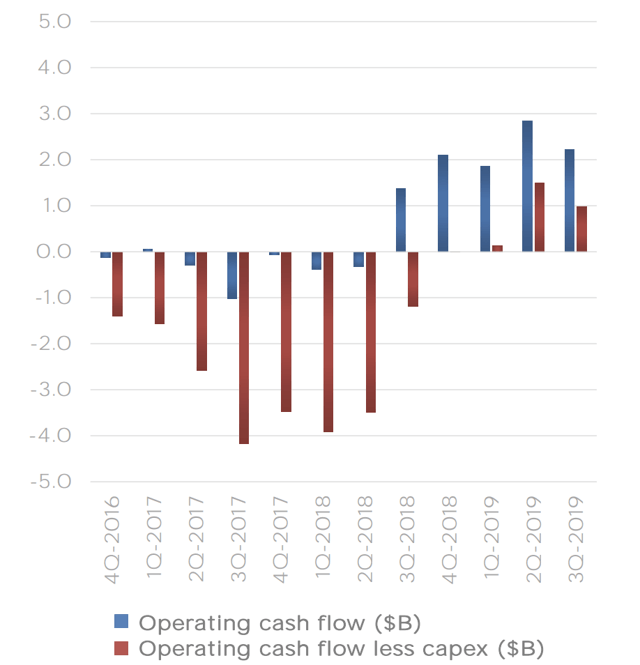 I spelled out these cash flows in greater detail in the chart below.

Stock based compensation, which is a non-cash expense added back during a company's reconciliation of net income to cash from operations, has been effectively eliminating this free cash flow on a value accretion basis. However, because it's not an actual cash outlay, Tesla's free cash flow continues to strengthen their balance sheet, which is visible through their cash on hand growing each quarter. With growth in revenues, and a corresponding growth in free cash flow, this large stock based compensation expense will become dwarfed. We will explore this idea a little bit later in the valuation portion of this article.

To this end, net income continues to disappoint investors. While this is important for the total value picture of Tesla, it doesn't communicate the underlying financial strength of Tesla. 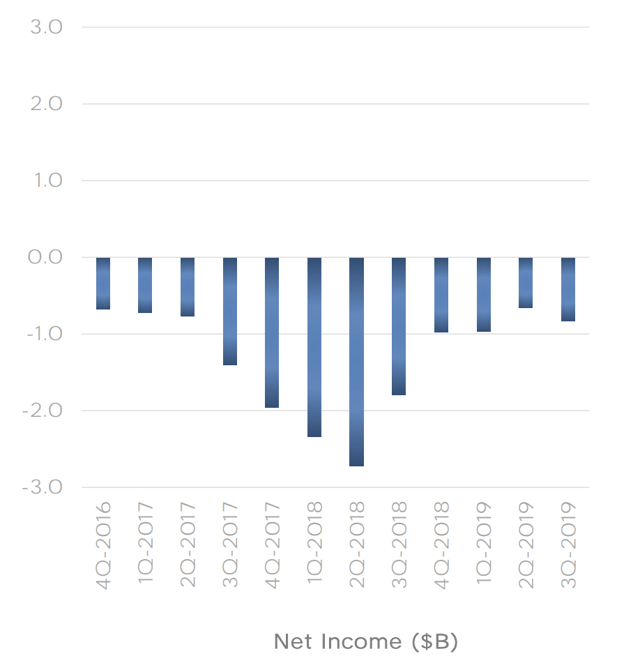 Valuation: Is It Even Possible?

With a glimmer of free cash flow, we can now at least surmise some semblance of what a fair value looks like for the company. I will provide, to the best of my ability, the best and worst case scenarios based on revenue growth and the resulting EBITDA, cash from ops, and capex.

I will do this by analyzing revenue, gross margins, and free cash flow trends so as to create a projection for what cash flows might look like in the future. I will then make conservative assumptions so as to provide investors a margin of safety before calculating a fair value based on those projected free cash flows.

We will take gross margins, which are the least likely to radically change, even with scale for Tesla, then create models of cash from operations and free cash flow margin based on gross margins.

With any DCF model, there are so many caveats that they almost become worthless, but to gain some semblance of understanding of Tesla's value as an asset, it's a worthwhile venture. Please comment below where you believe I may have misrepresented reality or been overly optimistic in my assumptions.

Now, the above estimate of value does not consider the extremely dilutive effect of Tesla's convertible bonds, generous stock compensation packages, and potential secondary offerings, all of which are sure to arise in the coming decade.

With those in mind, fair value might lie somewhere in the $500s, instead of the $600s, at which we've basically already arrived.

Now remember, the FCF growth rate is hinged to revenue growth, and the actual FCF estimation for 2019 is based on 3.6% of total revenues.

And this does not even account for the massive dilutive effects of the convertible bonds, generous stock compensation packages, and potential secondary offerings. At present, Tesla seems to be in the upper bounds of their potential valuation; however, as we will explore, free cash flow margin may be very, very conservative.

For Tesla shareholders, this article should be a welcomed reminder that the company is growing more solvent by the day with their ability to generate free cash flow, which is strengthening the health of their balance sheet.

If Tesla were to execute as they has done for the past 5 quarters for the next decade, the shares would be considered undervalued as of today. However, that is a big if. But if there's anyone capable of executing such a monumental undertaking, it would be Elon Musk... or Jeff Bezos.

With all of this being said, today's share price represents execution perfection for ten consecutive years, when accounting for the dilutive effects of convertible bonds, generous stock compensation packages, and potential secondary offerings.

What We May Not Be Considering And Tesla's Moat

At present, Tesla is a case of TINA for those in the market for an EV. "There Is No Alternative". The graphic below illustrates that idea to some extent.

Where my DCF model may prove to be grossly inaccurate lies in the realm of what Apple has perfected; that is, the ecosystem. Free cash flow for a car producer isn't easy to come by, as the producing cars is extremely capital and labor intensive. However, Tesla could produce cash flow if they find a way to monetize their platform, which is the physical car. Similar to Apple's or Mircosoft's explosive service business, Tesla could leverage their drivers' love for their vehicles by expanding services offered through the dashboard of the car, or in some way yet to be conceived. Tesla could work with companies, such as Apple to develop vehicle specific computing devices. These are just speculations, but I'm sure Tesla's think-tank is currently considering expanding their ecosystem with higher margin businesses, so as to remedy chronic malgeneration of free cash flow.

Today, I certainly could not recommend a new investor jump into Tesla as their share price soars past all time highs. But I also wouldn't recommend anybody sell their shares out of fear brought on by the naysayers, pessimists, and bears. The numbers don't lie: Tesla generates free cash flow in a stable way. Their bonds look like they will convert to equity eventually. The big question, however, remains: Can Musk execute? So far he has proven he can in a profound way.

With so many shares still short, the stock may still yet have room to run. Don't let the noise shake you. Hold here.

For those looking to get in, here's to hoping for executional mishaps that provide temporary entry points.