More Than A Bear Market Rally

Stocks continue their unlikely recovery in the face of skepticism among participants who see more trouble ahead for the global economy. The thinking of many analysts and observers is that the 34% rebound in the S&P 500 Index (SPX) has been nothing more than a massive bear market rally that is doomed to eventually fail, an opinion I hope to dispel here. And while some short-term obstacles remain to be overcome (as we’ll discuss) for stocks, the weight of evidence still supports an intermediate-term (3-6 month) bullish outlook.

Rising hope that the U.S. economy will soon be fully re-opened for business is a major catalyst behind the latest surge in the major indices. A vaccine update announcement from biotech company Moderna (MRNA) also buoyed positive sentiment on Wall Street earlier this week and pushed the SPX to its highest level since early March, before a contradictory report almost immediately ripped the rug out from under this hope.

Nonetheless, the major indices are holding firm near their recent highs with the lagging small caps finally showing some signs of life, as the Russell 2000 Index (RUT) rallied 6% on Monday—its biggest one-day gain since March. Many analysts have drawn attention to the lagging nature of the small caps as being a hindrance to a dynamic intermediate-term upside market move—an assessment I agree with—so it’s encouraging to see the Russell trying to break out from its lateral trading range of the last three weeks. To date, however, the RUT remains stuck in neutral.

The lack of participation from small cap stocks is among the obstacles I mentioned above in keeping this new bull market from being truly dynamic. Indeed, strong participation from the small cap stock universe is imperative, and it can’t be stressed enough that the small-cap Russell 2000 index needs to push decisively above its nearest chart resistance at the 1,374 level (the April 29 closing high)—the sooner the better. Once the RUT moves above this level, it will confirm an intermediate-term breakout, providing yet another important support for the bull market move that started in March. 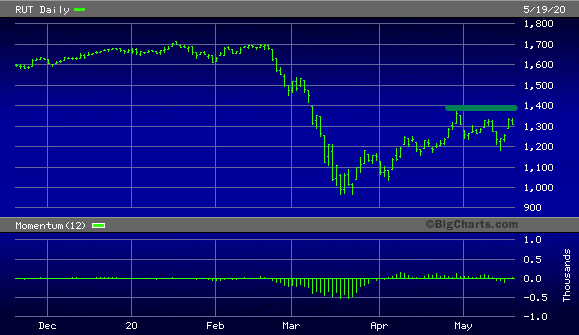 Along with an upside breakout above the 1,374 level in the Russell, there’s another key level that participants should be watching right now. It’s the 8,628 level in the Dow Jones Transportation Average (DJTA), which is the nearest benchmark “resistance” level in the DJTA’s daily chart (this level was formed by the close on April 29). A breakout decisively above this level would be immensely welcome from a technical perspective since it would let us know that a Dow Theory “confirmation signal” is likely imminent. 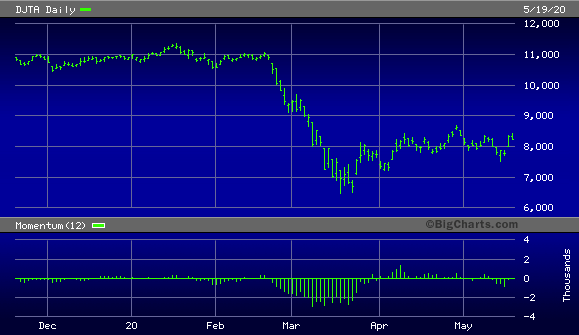 (As an explanatory note, I would point out that from a Dow Theory perspective, upside moves in the Dow Industrials should ideally be confirmed by corresponding moves higher in the Dow Transports. Up until now, the Transports have lagged the Industrials, although this hasn’t kept the bull from asserting itself in other ways.)

Also worth mentioning as a catalyst behind the market’s latest push higher was the statement by Fed Chair Powell, who told CBS that the Fed is “not out of ammunition” and has plenty of tools in its arsenal if needed to avert further systemic troubles. The Fed’s statement was music to investors’ ears, especially considering that the CBOE Volatility Index (VIX) is still at an abnormally high level.

While overall market choppiness has lately been subdued, recent VIX levels are still high by historical standards. Typically, the most dynamic bull markets have occurred when the VIX is around the 20-to-22 levels or lower. But with the VIX still above 30, it’s telling us that volatility is somewhat elevated and that traders are still clearly nervous over the economic outlook. As such, the market remains vulnerable to temporary bouts of news-driven selling pressure. (The higher VIX levels have also kept me from committing more capital to equities despite my bullish intermediate-term outlook.)

What’s more, before we get an “all-clear” signal that this new bull market is ready to start galloping ahead hard and fast, we should ideally see the VIX confirm the latest upside move in the S&P by making a lower low (below). As shown in the following graph, however, VIX hasn’t yet done this. This means that a measure of caution is still in order in the immediate term (1-4 weeks) until the VIX, which closed May 19 at slightly above 30, finally breaks decisively lower and falls below the 27 level. 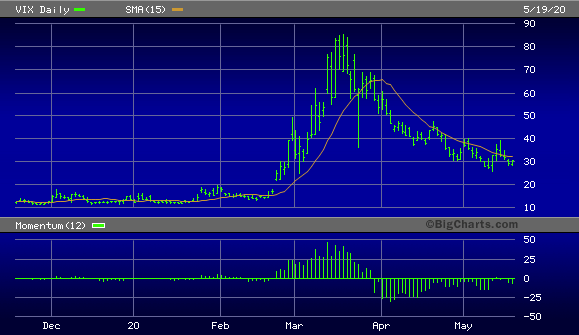 Another sign that investors are still on edge and not completely comfortable with the new bull market can be seen in the following chart. This shows that the ICE BofAML High Yield Option-Adjusted Spread, one of my favorite liquidity indicators, is still elevated and well above normal levels.

This credit spread should drop back below the 6% level to let us know that informed investors are no longer stressing over credit conditions. While there’s plenty of liquidity in this market, the big-money pros in the bond market evidently aren’t convinced that the U.S. economy is completely out of the woods yet. But a move below 6% in the above chart would tell me that conditions in the credit market are finally returning to something approaching “normal,” which in turn would provide a better backdrop for equities to kick off another extended move higher.

Nevertheless, the Fed’s unswerving commitment to providing financial market liquidity is a strong inducement for embracing a bullish intermediate-term stance. As Ed Yardeni has observed, the Fed’s “from bazookas straight to B52s” approach to liquifying the market is exactly what Wall Street was demanding during the panic sell-off in March, and the Fed was all-too willing to oblige. Indeed, all major central banks have joined with the Fed in a synchronized move at providing necessary liquidity, as the following graph illustrates. This is perhaps the most powerful of all indicators that argue for a bullish outlook toward equities. 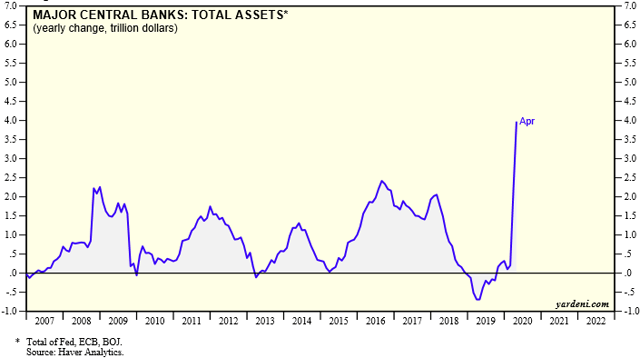 It’s also worth noting that my most important gauge for measuring the stock market’s near-term path of least resistance is still trending higher. The four-week rate of change (momentum) of the NYSE new 52-week highs-lows weakened somewhat last week, but it’s still rising and continues to chug forward (see below); it’s also still in positive territory, which is encouraging. As previously mentioned, my biggest concern would be if this indicator turns negative in the coming days, but as long as it’s above the zero level, I consider the market to still be in fine shape internally on a short-term basis with the path of least resistance for stocks up. 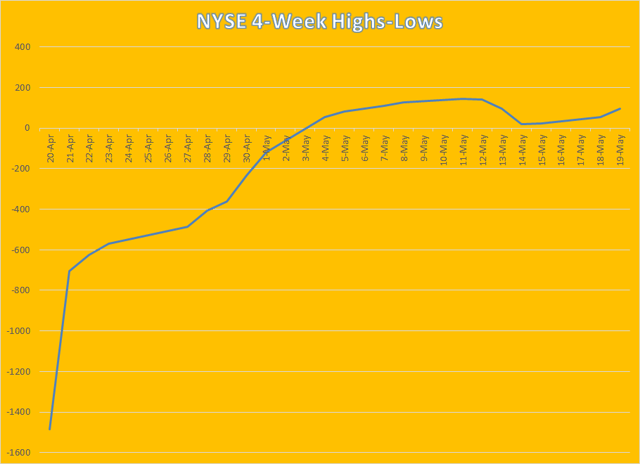 Another important consideration is that for most of the last few weeks, new 52-week lows on the NYSE and Nasdaq have been well below 40. Several consecutive days of above-40 new lows on the Big Board would cause me to pull in my horns, but internal selling pressure is virtually non-existent right now and is definitely supportive of the bullish case for equities.

On the investor sentiment front, meanwhile, the latest weekly survey of investors by the American Association of Individual Investors (AAII) showed that 51% of respondents were bearish in the latest week compared to only 23% bullish. That’s still a very constructive reading (and well above the 31% historical average) suggesting there’s a large amount of skepticism concerning the stock market. From a contrarian’s perspective, this means that there’s still likely plenty of short interest to fuel additional short-covering rallies; it’ also very good news for the bulls and points to higher prices ahead in the intermediate term. 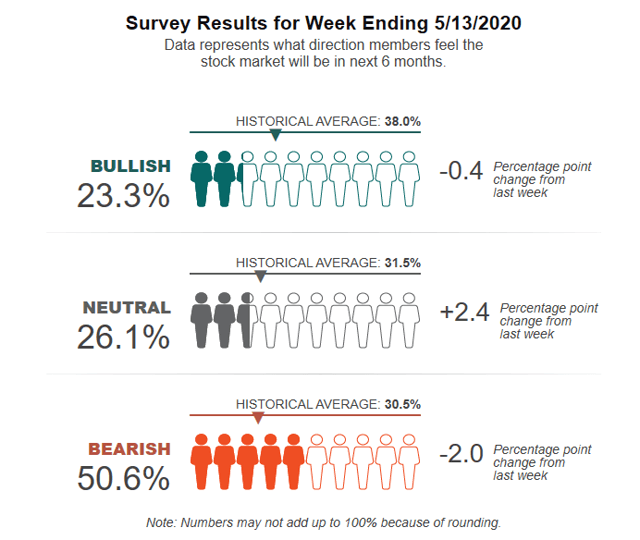 In conclusion, the U.S. broad market remains in good shape internally despite some near-term obstacles. Foremost among these obstacles is the continue lagging action of small cap stocks, persistently high credit spreads, as well as the failure of the CBOE Volatility Index to confirm the latest move higher in the S&P 500 Index. However, diminished new 52-week lows, high levels of pessimism among retail investors and central bank liquidity measures point to the bulls ultimately prevailing from a 3-6 month perspective. A bullish bias is therefore still justified.