Blockchain… the smartphone… 5G…Over the last 20 years, we’ve lived through a END_OF_DOCUMENT_TOKEN_TO_BE_REPLACED

I’m going to keep this relatively short. I’ve written thousands of articles over the years, and anyone who’s read me for any period of time knows where I stand when it comes to hatred, bigotry and violence. I find all these things repulsive, and think people who gravitate to such behavior to be operating on such a low level of awareness, it’s genuinely hard for me to believe these people exist in real life.

I published my seminal piece discussing the repulsion I feel with today’s political environment back in February in the post, Lost in the Political Wilderness. Now’s a perfect time to reread that piece, but here’s an excerpt if you’re short on time:

I think the U.S. citizenry is being afflicted by a sort of mass insanity at the moment. There are no good outcomes if this continues. As a result, I feel compelled to provide a voice for those of us lost in the political wilderness. We must persevere and not be manipulated into the obvious and nefarious divide and conquer tactics being aggressively unleashed across the societal spectrum. If we lose our grounding and our fortitude, who will be left to speak for those of us who simply don’t fit into any of the currently ascendant political ideologies?

For those of you who consider yourselves to largely reside in the yellow state (2nd tier consciousness), I have one key message for you. There’s a very deliberate attempt to manipulate you into devolving back into one of the lower tiers. Likewise, there is a very deliberate attempt to prevent those on the cusp of higher consciousness from ever evolving. The reason is simple. The lower tiers are very tribal and easily divided and conquered. The higher tiers are not.

Unlike most people writing articles on Charlottesville, I’m not going to spend my time getting on a pedestal to prove to everyone how much I hate neo-Nazis. My contempt for bigotry and violence has been a constant theme throughout all my writings over the years. In contrast, the purpose of this piece is to try to knock some sense into people so that we don’t lose sight of the bigger picture. Let’s start by discussing a tweet I wrote earlier today.

What’s more likely, Nazis taking over U.S. government, or oligarchs using violent radicals on both sides to maintain their grip on power?

I set myself up for hysterical criticism with that tweet by saying “both sides,” which dishonest people will surely twist into support for Trump’s commentary on this weekend’s violence. I don’t care. While I certainly don’t want to minimize the disturbing scenes from Charlottesville, and the terrible loss of life and multiple injuries that occurred, it’s always important to keep our eyes on the bigger picture.

Specifically, we need to review some obvious facts. Neo-nazis and antifa didn’t destroy the middle class. They didn’t start an unnecessary and barbaric war in Iraq either. Neither of these groups jack up prescription drugs, nor do they poison your water or food supply. Oligarchs and their political minions do that. Violent Americans dressing up in Halloween costumes aren’t the real threat, oligarchs are, but the corporate media doesn’t want to talk about that. This is precisely why they focus so heavily on clueless protestors and counter-protestors punching each other. It benefits the true power structure in America.

I’ve got no affinity for neo-Nazis or antifa, but I also recognize them to be a relative sideshow compared to the far more pressing threats we face today. You can discern where the true power lies based on what the corporate media chooses to focus on, and what it chooses to ignore. An obsession with useful idiot American protestors punching each other is very similar to the 9-month incessant focus on Russia election conspiracy theories. It perfectly aids the agenda of the real power structure in this country. Creating outrage about neo-Nazis and Russia doesn’t hurt oligarchs; in fact, it helps their cause. It diverts attention and energy away from the true cancer destroying society, and provides the added benefit of allowing terrible people to get up on soapboxes. Condemning neo-Nazis is easy and takes no real courage, which is why oligarchs and their spokespeople salivate at the opportunity to use it to advance their own unrelated interests. Here are two examples of what I mean.

First, there’s Neera Tanden of the centrist-Democratic aligned Center for American Progress. The political ideology of such people can be best summarized as: “oligarchs are great as long as they support abortion.” Theirs is a dying ideology — soon to be extinct — but they’re desperately attempting to hang on to their dwindling relevance. While I’m sure neo-Nazi marches genuinely outrages such people, it’s telling that they immediately use such an opportunity to shift the conversation away from economic populism (which they despise), back to politics of emotion and identity.

Adam Johnson perfectly took her to task for exploiting the violence to attack leftist economic populists who remain stubbornly focused on the problems of oligarchy.

That’s nothing though compared to the CEO of Goldman Sachs, who unsurprisingly, jumped on the opportunity to make himself look like a good guy compared to neo-Nazis. Naturally, the corporate media was right there to amplify the vacuous preening of this Wall Street oligarch. 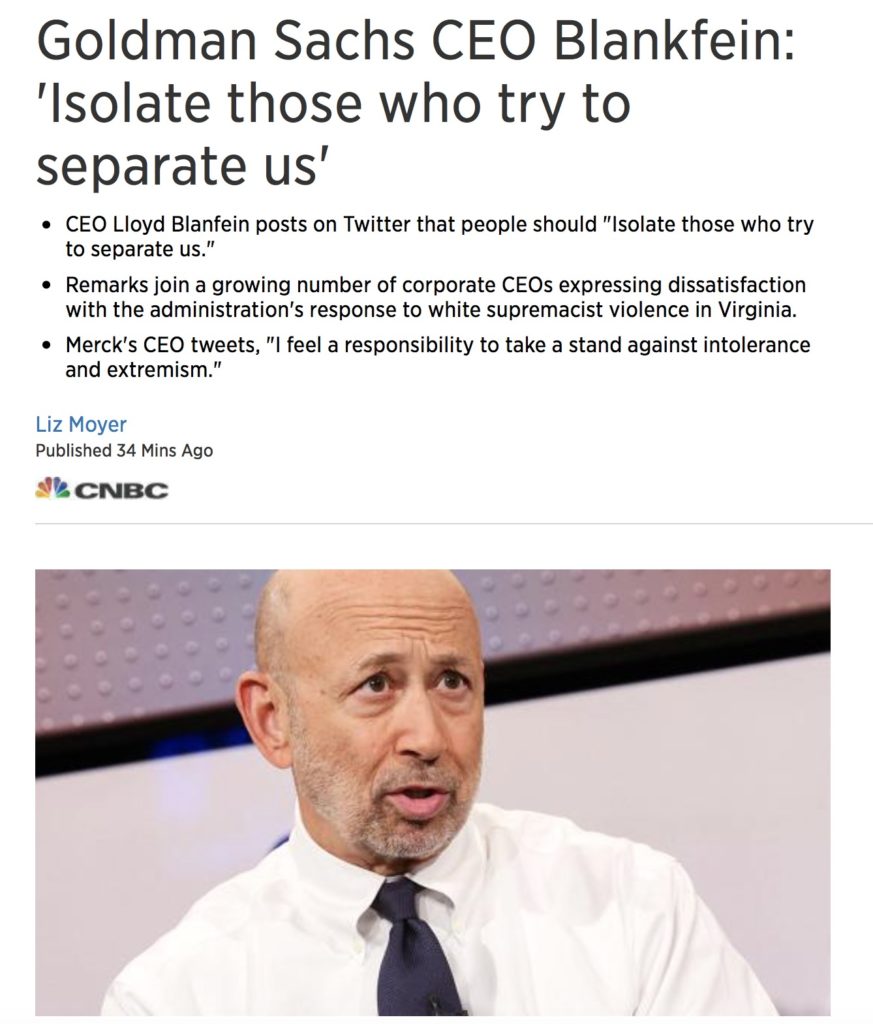 Apex financial predators and pharmaceutical company CEOs are suddenly heroic figures. See how easy that was?

So here’s my point.

Yes, neo-Nazis are terrible people, and violent neo-Nazis are even worse; but so are violent leftist protestors and anti-protestors. Anyone dressing up in a costume looking for a fight is unhelpful to those of us who want to actually deal with the multitude of things that have gone awry in this country.

Personally, I’m not going to be manipulated into thinking these fringe groups of lunatics represent the real problem in America. I know who really ran this country into the ground, and it’s not them. It’s the oligarchs and their apologists who are now out there acting like the voice of reason.

Play into the divide and conquer game all you want, just recognize that if you don’t know who the sucker at the political table is, it’s probably you.