When screening the market for stocks that are trading at fair prices, END_OF_DOCUMENT_TOKEN_TO_BE_REPLACED

Bouncing back with incredible force, the S&P 500 has gained 50% over END_OF_DOCUMENT_TOKEN_TO_BE_REPLACED

Micron: Too Much, Too Soon

For whatever reason, investors desperately want to own Micron Technology (MU) in the midst of a memory industry slump. The stock has surged about $10 off the lows despite the company not even printing a negative quarter so far. Updated industry data continues to support my previous investment thesis of avoiding the stock for now.

Our recent industry discussions suggest that memory fundamentals remain very soft, and prices continue to decline. This is in contrast to the significant rally in the memory and HDD stocks year to date even on weak fundamentals.

Goldman Sachs now sees the base case of Micron earnings under $4 in focus. The analyst community still has the company earning about $7 in FY20. Micron has seen substantial earnings cuts, but most analysts haven't thrown in the towel yet. 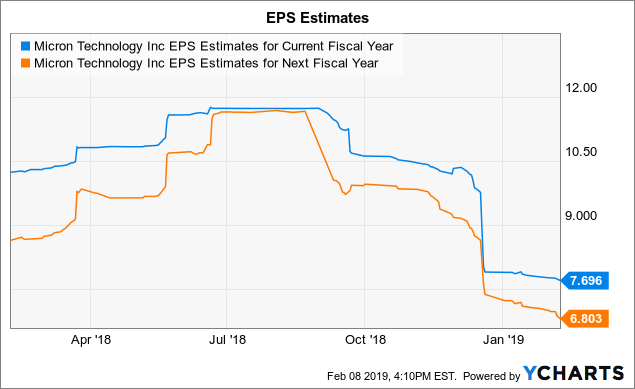 According to a mid-January report by DrameXchange, DRAM prices are expected to take a bigger Q1 hit than expected. The previous forecast was for a 15% decline after the original forecast of a ~10% decline back in December. 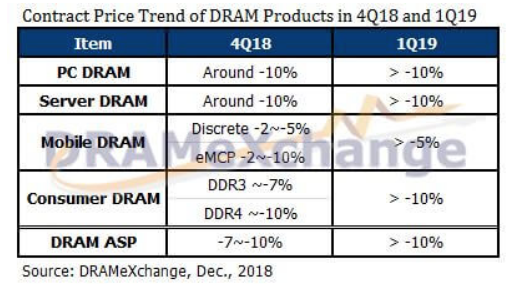 A big part of the problem is the server market was DRAM prices are now expected to plunge over 20% in Q1'19. The good news for the market is that the rate of change will probably improve as the Q2 decline makes a modest step up to a 10% decline. The server chips are expected to see declines all year, but the market will latch onto the trend as the year progresses.

In the November quarter, Micron got nearly 70% of revenues from DRAM. The company is facing substantial downside risk for the current end to FQ2 and the upcoming start to FQ3. 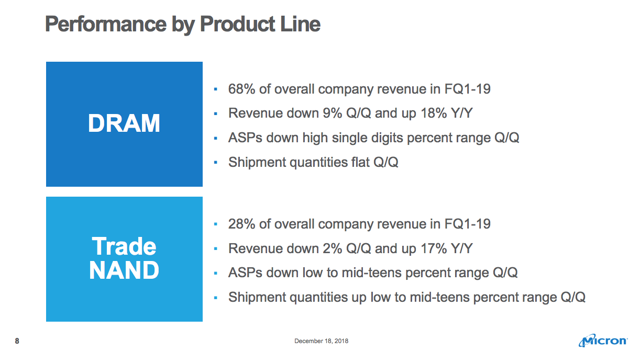 Some analysts including Goldman Sachs now forecast the memory company earning less than $1 in the May quarter. In my previous work, the discussion was around the company still earning upwards of $8 per share in FY19 and exactly why my warning was to not get that excited about Micron Tech until the cycle actually approached the bottom.

The recent rally was far too fast and far too soon when Micron hasn't even reported a negative quarter. Considering Micron last reported FQ1 results for the period ending November with 16% revenue growth, the market still hasn't gotten through the downside period. 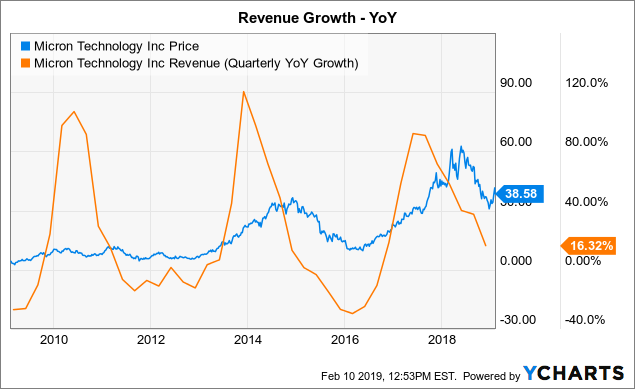 Analysts now expect FQ2 revenues down nearly 19% and FQ3 results ending May down 27%. The above chart continues to make it clear that the stock is unlikely to hold a rally until the negative trend of larger YoY losses is over. In fact, Micron didn't start rallying in 2016 until the trend turned up.

For this reason, the recent rally from $30 to $40 is a false breakout. My previous work had quarterly EPS numbers dipping to $1.25 and Goldman Sachs suggests my low-ball estimate is at risk. Gross margins are taking a hit going from 59% in FQ1 to guidance of hardly holding 50% in FQ2. The May gross margin is likely in the 40s.

Micron just isn't going to hold a rally as EPS estimates take a further hit from the current $7 level to at least $5 and possibly even lower to the sub-$4 range. In fact, investors need to prepare for the current estimates to get cut in half.

The key investor takeaway is that the market remains too bullish on the stock. Investors snapping up Micron Tech with the market rally in January are far too eager to own a stock still falling into the unknown depths of the down cycle in memory. The historical time to own Micron is when the YoY downtrend reverses possibly in the May quarter reported in June.

For now, avoid the stock after this rally.