Financial markets continue to exhibit extraordinary volatility, including the single worst day for oil since 1991 on Monday, March 9th, 2020 - a day that saw the United States Oil Fund (USO) lose more than 25% of its value as shown below. 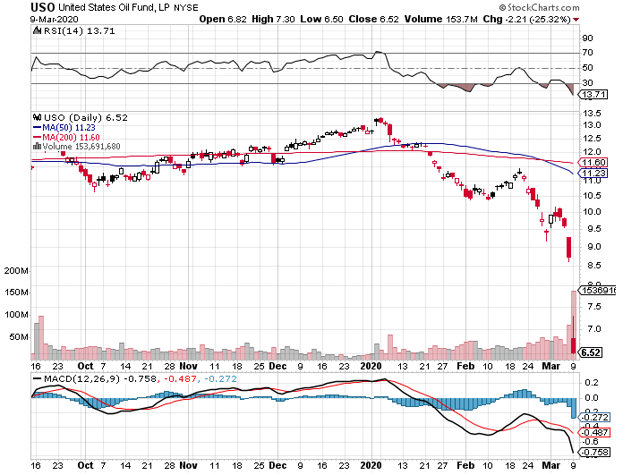 This extraordinary price action has continued throughout the past two weeks, with the Dow Jones Industrial Average, as measured by the SPDR S&P Dow Jones Industrial Average ETF (DIA), regularly swinging more than 1,000 points during market trading sessions, and even sometimes 2,000 points, including recently posting its 2nd, 5th, and 13th largest of all-time percentage drops, along with its 10th largest percentage gain, as the following table shows. 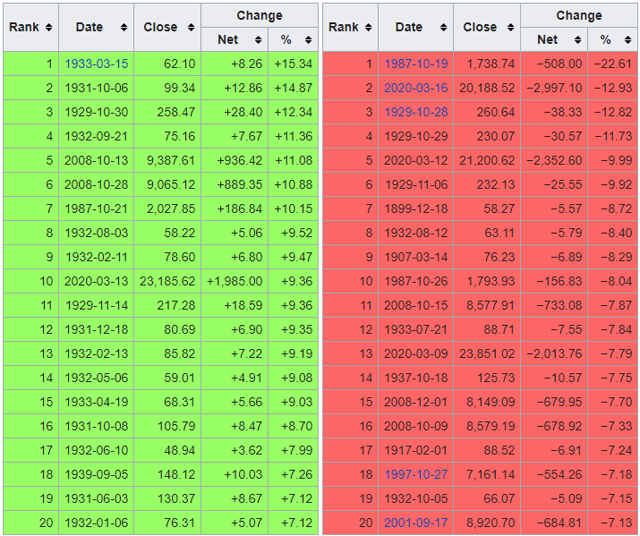 This exploding volatility actually has its roots in the blow-up of the short volatility trade of early 2018, the melt-up in the large-cap growth stocks, best exemplified by Tesla's (TSLA) moon shot higher, and this wave of extraordinary price moves could next spread to downtrodden energy equities.

Lost among the record levels of volatility, which has surpassed even the 2008 thresholds, is that the market structure is starting to work in reverse. More specifically, stocks that have seen precipitous falls in market capitalization continue to see amplified selling pressure, including Boeing (BA), whose shares are down 68.5% year-to-date. A portion of the selling is forced selling as the fall in market capitalization prompts even more price insensitive, and valuation insensitive, passive and ETF selling.

This self reinforcing cycle is the reverse image of what transpired for much of the bull market. Selling is begetting more selling, and the corporate stock buybacks, which were often done at much higher prices, are being abandoned, creating further selling pressure. This is about to become a much bigger issue, as corporations like Boeing, which has bought back over $43 billion in shares since 2010, look for taxpayer backed rescue packages.

From my perspective, I do not see this non-virtuous cycle ending, until the biggest stocks in the SPDR S&P 500 ETF (SPY), namely Apple (AAPL), Microsoft (MSFT), Alphabet (GOOGL), (GOOG), Amazon (AMZN), and Facebook (FB), experience their share of disproportionate selling pressure, which will be prompted by index outflows that are starting to happen already. For now, the seemingly never-ending unwind in Boeing shares is a stark example of what can go wrong when price insensitive, and valuation insensitive, fund flows work in reverse.

Crowded trades are unwinding, and the resultant selling pressure of the favored investment strategies has caused a sell-off in almost all risk assets. Companies in the leading market capitalization indices that have their own specific stumbles are going to be sold more aggressively, as a stock price decline leads to more selling pressure.

On January 27th, 2018, I wrote a Seeking Alpha Instablog article with the title, "Time To Sell BA Shares?"

If you scroll down in that referenced article a little bit, you will see that Boeing shares were trading around $343 at the time I published the article.

Ultimately, Boeing shares went on to further gains, topping out at roughly $430 per share in 2019, before significant issues, including plane crashes, with its 737 Max airplane caused a sell-off from the share price highs in 2019 that has morphed into a full-fledged melt-down with the widespread outbreak of COVID-19.

Providing another perspective is the monthly chart, which shows that Boeing shares have given up several years of advances in a single month. 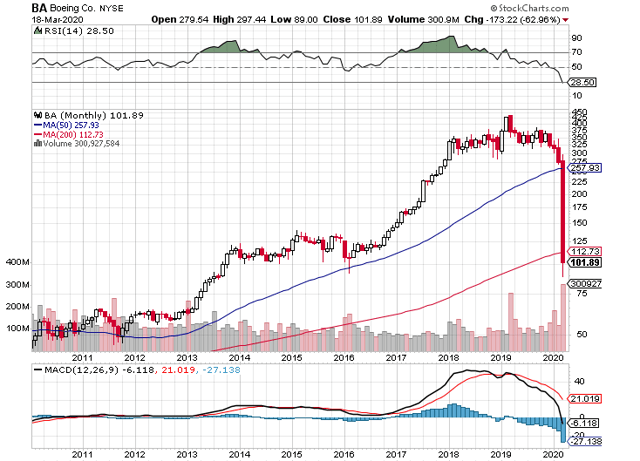 Simply put, there has been a tremendous price reversal in Boeing shares in short time, and my summary bullet points of the blog post from January of 2018 captured the extreme optimism regarding Boeing shares, and we have morphed to extreme pessimism in record time.

The free-fall in Boeing shares has forced a self-reinforcing cycle of selling by the price insensitive and valuation insensitive passive fund flows. Eventually, as passive investors sell their index funds, this same dynamic will play out with more S&P 500 component companies. The biggest selling pressure, though, will be generated by a company that falls down the proverbial market capitalization ladder.

Boeing has 564.2 million shares outstanding, and with a stock price that closed at $101.89 on Wednesday, March 18th, Boeing's market capitalization is currently $57.5 billion.

With this market capitalization, Boeing now ranks as the 86th largest holding in the SPDR S&P 500 ETF, according to State Street Corp. (STT), which is SPY's sponsor, ranking behind Allergan (AGN), Caterpillar (CAT), and Vertex Pharmaceuticals (VRTX), and ahead of Biogen (BIIB), Cigna (CI), and Anthem (ANTM).

At the end of 2019, Boeing's market capitalization, at a stock price of $325.76 on December 31st, 2019, was $183.8 billion, which would have ranked Boeing as roughly the 30th largest company in the S&P 500 Index, so Boeing has fallen over 50 places down the relative market capitalization rankings, which causes passive funds like the SPDR S&P 500 ETF, which is the biggest ETF by fund assets in the world, to then sell shares.

Looking at the 2019 returns above can make an investor or speculator reminisce for the glory days of the past, especially with the SPDR S&P 500 ETF down 25.4% year-to-date as I write this research report, however, the important takeaway is that Boeing's relative performance was already stumbling, and it simply has taken the elevator down in 2020.

Closing Thoughts - When A Prominent Stock Falls Out Of Favor, Selling Pressure Increases & The Market Structure Works In Reverse

The very structure that drove the best decades of returns in the U.S. stock market is starting to work in reverse, and Boeing is a prominent example of what can happen when a stock goes from in-favor to out-of-favor.

Outside pressure on Boeing is going to continue, as the company, along with major airlines, including Alaska Air Group (ALK), American Airlines Group (AAL), Delta Air Lines (DAL), JetBlue Airways (JBLU), Southwest Airlines (LUV), and United Airlines (UAL), is asking for aid and loan guarantees from the Federal Government.

Obviously, COVID-19 is a black swan, as I wrote about on February 25th, 2020, that really nobody saw coming; however, investors are going to have an issue with Boeing and the major airlines asking for federal assistance, since these companies have spent a majority of their free cash flows the past decade on stock buybacks.

For Boeing, it has bought back $43.4 billion of stock the past decade, using 74% of its $58.4 billion in free cash flow generated, and remember today, the company's market capitalization is now $57.5 billion.

Thus, in contrast to Warren Buffett's Berkshire Hathaway (BRK.B) (BRK.A), which has roughly $125 billion in cash and short-term investments, think Treasury Bills, waiting for opportunities, Boeing was not prepared for an unexpected event, no matter how unexpected that event was for all of us following the markets on a regular basis.

Bigger picture, what if something impacts one of the biggest market capitalization companies in the S&P 500?

For perspective, the S&P 500 Index (SP500) returns have been driven by a handful of key stocks the past year and the past decade. 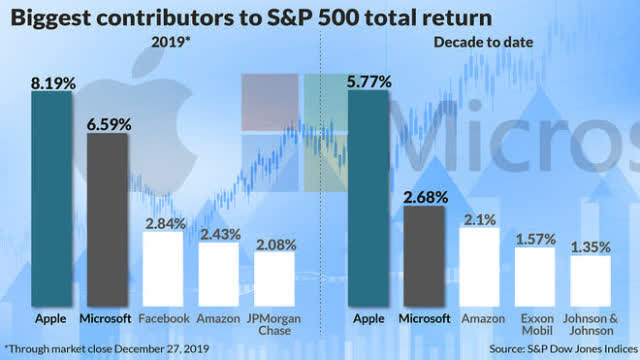 The biggest market capitalization stocks have held up much better in the stock market correction thus far, especially compared to Boeing. However, it is only a matter of time if fund flows reverse to the passive index favorites, that selling pressure intensifies, and the current market structure works in reverse, which we have witnessed in an amplified fashion with Boeing.

Wrapping up, I think it's only a matter of time until a historic capital rotation from growth to value takes place, led by a rotation from the most loved and in-favor sector today, technology, to the least loved and most out-of-favor sector today, which is of course the energy sector. If Boeing can escape this self-reinforcing decline, and emerge intact, it is definitely one large-cap equity that is trading at longer-term attractive valuation multiples, with BA shares at their cheapest enterprise value to revenue ratio since the 2009 lows. 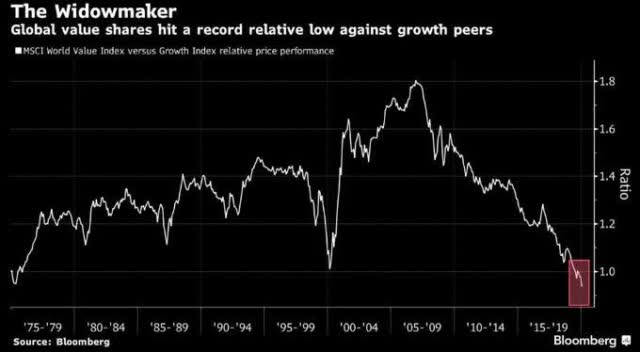 With this investment backdrop, the hidden historic opportunity, the proverbial forthcoming golden age of active investing, lies in cast-aside, out-of-favor, non-correlated equities - including energy equities, which are historically loathed, and thus, they are not a big part of the market indices, and subject to index, passive, and ETF selling pressure. More specifically, from my vantage point, there's a generational opportunity in the downtrodden leading U.S. natural gas producers. Several of these were S&P 500 Index stalwarts 10 years ago, yet they have been summarily kicked to the curb even though their reserves and cost of production are materially better - sometimes by a factor of three times or more. These producers have collectively lowered their breakeven profitability levels dramatically vs. their peer group from a decade ago. As a result net income and, more importantly, free cash flows should surge at higher natural gas prices - particularly above $3, which I believe is a mathematical inevitably.